By Vancouver With Love
Jump to recipe

This week’s recipe is a quick one, but a good one! Much as I love spending a lot of time in the kitchen playing with different ingredients and coming up with new concoctions, sometimes it’s the simplest recipes that do the trick. You can whip up these vegan oatmeal waffles using only three ingredients!

These three-ingredient oatmeal waffles are chewy, satisfying, and delicious. They’re the ultimate vegan, gluten-free waffles without all the rubbish thrown in. Made simply from oats, bananas, and plant-based milk (plus any extras you wish to add), they’re a great option for gluten-free breakfasts or just as a snack.

If you’re new to a plant-based diet, a great tip is to add your favourite protein powder to these oatmeal waffles to make them extra-filling! (I’m a big fan of Omega Nutrition’s Pumpkin Protein Powder–not sponsored at all, I just find it has a really subtle taste and I digest it easily.)

One note: as these vegan waffles are made with oats, bananas, and plant milk, they don’t have the same light and airy consistency of traditional waffles. They’re hearty and delicious, but do be aware that they’re a little heavier than waffles you’d eat in a restaurant because they’re full of such good ingredients!

Also, this recipe calls for a waffle iron. Don’t have a waffle iron? No problem. This batter works as waffles or pancakes, so feel free to pour it into a frying pan and make some thick vegan pancakes instead. 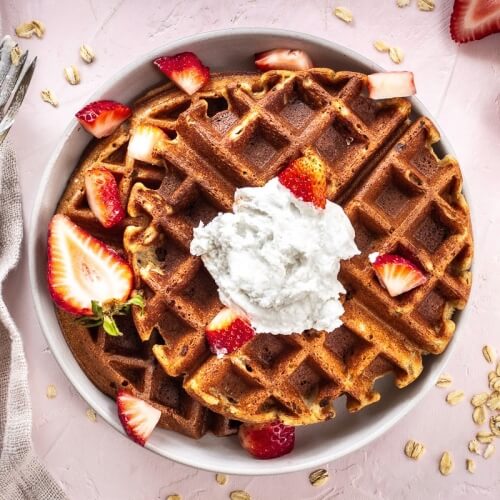 Craving some more delectable vegan breakfast recipes? Try making this veggie-packed fluffy and light chickpea omelet. The recipe is super easy to whip up. Plus, the best part about this vegan omelet recipe is that you can customize it with your favorite fillings. Add onion, green peppers, or even vegan cheese!

Or, try this hearty truffled vegan mushrooms on toast for the perfect brunch. The gourmet truffle cream laced with caramelized onions with grilled mushrooms on toast alongside a fresh spring salad is sure to keep you full and energized throughout the course of your day.

This recipe was republished with permission from Vancouver With Love.