Leading the Olympic Winter Games competition for couples skating in Pyeongchang, South Korea, with Eric Radford (the finals have not been completed at publish time), vegan two-time world champion Canadian figure skater Meagan Duhamel is already a hero to many. And it’s not just for her excellence on the ice. Duhamel is a hero to animal rights activists and a few dogs, as she rescued a dog last February while visiting South Korea for the Olympics test-run.

The dog, reports the New York Post, was headed to market — as meat. Dog meat is still a popular delicacy in South Korea despite efforts to stop the practice.

“Is there a gold medal in animal rights?” the New York Post asked of Duhamel’s commitment.

The vegan figure skater not only adopted a mini-daschund whom she named Moo-tae, but she reportedly urged her fellow athletes to do the same while in the country for the Olympics.  When she adopted Moo-tae, she also took home another dog last year to an eager family waiting for the rescue pup. And the skater will reportedly be flying back to Canada with other rescue dogs to rehome after this year’s Olympics conclude. Free Korean Dogs, a nonprofit group that works to adopt rescued South Korean dogs to homes in the U.S. and Canada, facilitated the adoption for Duhamel. 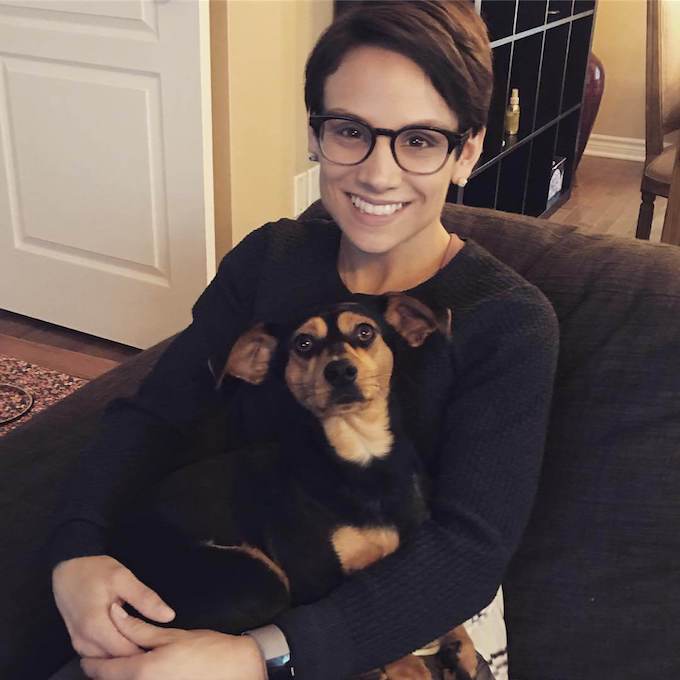 Meagan with her rescue pup

Because of the controversial nature of dog meat, restaurants in Pyeongchang “were offered government cash if they stopped selling dog dishes during the games, but some declined, fearing they’d lose loyal customers,” the Post notes. One restaurateur told the Post: “I have been selling dog meat for decades. It is really difficult for me to change my menu just because of the Olympics.”

According to the Post, close to two million dogs are raised in Korean dog meat farms every year for eventual slaughter. Like other livestock, they’re locked in cages with restricted movement, abused and neglected, and prone to infections and diseases in the cramped quarters.

The Korean Association for Animal Protection petitioned South Korea to ban all sale of dog meat during the Winter Olympics, citing a small ban on canned dog meat ahead of the Seoul, South Korea, Summer Olympics in 1984. And while dog meat isn’t a typical staple in Korean homes, it’s a common feature on restaurant menus and even cited for some medicinal benefits. “We wish to bring an end to Korea’s dog meat-eating habit,” the group said at a press conference last month ahead of the Games. “Dogs are man’s best friend and we shouldn’t eat them.”