(Updated November 13, 2019) | The iconic Oreo sandwich cookie is a longtime vegan treat, and it now comes in a variety of other delicious dairy-free flavors, too. From extra creme to seasonal favorites to the hottest flavor trends, there’s an Oreo for every mood.

Oreos have been a dairy-free and vegan treat since they first launched. Despite the creamy center filling, the cookie contains no milk. With the exception of a few flavors that contain some animal ingredients like honey, most Oreos are vegan. There is a risk of cross-contamination from equipment, however. So for people with dairy allergies, Oreos may not be the safest treat.

Whether you twist, dunk, or eat them in one whole bite, you can’t go wrong with the Oreo. It’s a classic — now more than 107 years old. Often imitated but never duplicated, the Oreo remains the best-selling cookie in the United States for good reason.

The cookie is so synonymous with American culture that you can even take a personality test that analyzes you based on how you eat the popular cookie.

The Nabisco brand (now owned by Mondelez) is launching a new platform to encourage “playfulness,” the company announced last month. Called “Stay Playful,” the global creative platform includes TV ads featuring musician Wiz Khalifa and his son. Khalifa recorded the original song, “Playful 4 Life,” for the new ad where he and his son are dunking Oreos. “They say we’re too grown for fun? We say playful’s never done,” the song says.

“Playfulness has always been part of the Oreo brand’s DNA, and now with ‘Stay Playful,’ the brand is outwardly establishing its playful spirit as the core of all creative communications,” Mondelez said in a statement.

The brand also introduced the Oreo Music Box — a miniature turntable that plays music when you put an Oreo cookie on it. It also created an Oreo DJ Mixer that works with Double Stuf cookies.

The Oreo cookie has been reinvented into many desserts, perhaps most notably the Cookies ‘n’ Cream flavor ice cream that usually includes an iteration of, or actual Oreos, mixed with vanilla ice cream.

The Oreo catalog extends far beyond the ordinary– the Nabisco brand frequently updates its flavor catalog with new, seasonal, and limited-edition options.

Earlier this year the brand launched The Stuf Inside promotion, which invites fans to scan their cookies for “an opportunity to win daily prizes ranging from OREO sweet treats to limited-edition one-of-a-kind items designed in partnership with a variety of playful, industry-leading brands.”

“People love playing with OREO – from finding new ways to interact with the brand, to dunking their cookies and dreaming up their own unique flavor ideas – we love to find new ways to share that playful spirit with our fans,” Justin Parnell, Senior Director, OREO brand, said in a statement. “The Stuf Inside promotion uses technology to give fans a new, fun way to engage with OREO by scanning an OREO cookie to unlock a playful virtual experience with deliciously unexpected prizes.”

In 2012, Oreo announced the launch of its rainbow-colored creme cookie to celebrate Gay Pride month. While it wasn’t technically a flavor available for purchase, the cookie earned both praise and criticism. Then parent company of the brand, Kraft, said it stood by the promotion.

“Kraft Foods has a proud history of celebrating diversity and inclusiveness. We feel the Oreo ad is a fun reflection of our values.”

While the Oreo has stayed mostly true to its original form, the cookie did receive a notable upgrade in 2006. That’s when Nabisco replaced trans fats in the cookies with non-hydrogenated vegetable oil.

Trans fats have been linked to numerous health issues including heart disease and obesity. While the U.S. has made efforts to regulate and remove trans fat from the food system, a food that contains up to 0.5 grams of trans fat in a serving can be labeled “0 grams of trans fat.”

Despite being trans-fat-free, Oreos are still linked to a controversial oil: palm oil. The popular oil choice for baked goods is highly controversial because of its connection to rainforest destruction throughout Indonesia. The region is home to endangered animals including the Bornean orangutan, but as demand for palm oil increases, more of the forest is being clear-cut for palm plantations, putting unsurmountable pressures on the animals.

“It’s outrageous that despite promising to clean up its palm oil almost ten years ago, Mondelez is still trading with forest destroyers,” Kiki Taufik, the global head of Greenpeace Southeast Asia’s Indonesia forests campaign, said in a statement last year. “Palm oil can be made without destroying forests, yet our investigation discovered that Mondelez suppliers are still trashing forests and wrecking orangutan habitat, pushing these beautiful and intelligent creatures to the brink of extinction. They’re literally dying for a cookie.”

Palm oil production is also linked to climate change. According to Greenpeace, tropical deforestation produces “more greenhouse gas emissions each year than the entire European Union,” outranking every country except the USA and China.

“Mondelez CEO, Dirk Van de Put, promised to offer consumers ‘snacking made right’. But there is nothing right about palm oil that is produced by killing orangutans and fuelling climate change,” said Taufik. “This must be a wake up call to Mondelez and other household brands to take action and cut Wilmar off until it can prove its palm oil is clean. Ultimately, if big brands can’t find enough clean palm oil to make their products then they need to start using less.”

The snack favorite may be the leader in vegan sweets but it’s certainly not the only player. Demand for vegan desserts and snacks have skyrocketed in recent years as consumers are dropping dairy and eggs, ingredients common in baked goods.

The Complete Guide to All the Vegan Oreo Flavors

Start at the beginning: the original Oreo sandwich cremes are staple snacking for good reason. Chocolate and vanilla go together like, well, chocolate and vanilla. Line up your favorite vegan milk flavors and let the dunking begin.

Did Double Stuf validate your own efforts to twist and smoosh two regular Oreo cookies together for the extra creme? Life is all about the Stuf, right? So just go on and do you, Double style.

The Office star Mindy Kaling put all the Oreos to the test recently and hailed the Most Stuf, “it’s like cream with a hint of cookie, which is exactly how I like my cookies…truly decadent.”

There are no actual carrots in the Carrot Cake Oreos, but that shouldn’t stop you from eating them.

If you’re not on team lemon yet, let Oreo help you. Nothing says refreshing like equally tart and equally sweet crispy, soft Lemon Oreos. It’s like lemonade without the hassle of drinking.

Vanilla isn’t boring. And when it’s vanilla-flavored Golden Oreo cookies on more vanilla Oreo creme? It’s definitively extra. Your future favorites also come in a Double Stuf Oreo variety as well. Because the only thing better than vanilla is extra.

Sometimes all you need is a little pop of color to change the mood. Limited-edition Spring Oreos deliver all of the flavors you love but with a bright sunny yellow hue to the otherwise black-and-white world of the sandwich creme.

Nothing beats a slice of chocolatey-peanutty piece of pie, but honestly, who has the time? Forks and knives and plates? No thanks. We need our favorite flavor combo to be mobile, thank you very much.

While the regular Oreo Mint flavor contains honey, the Thins version is honey-free. And with a blast of peppermint oil, they’re as cool as they are delicious.

Birthday cake flavor is popping up all over the place – from ice cream to Easter peeps, the cloyingly sweet flavor of youth is also popping up in Oreos. If you’re the first one to grab a slice at the kiddo bashes, then this is for you. But Delish reviewers weren’t so keen on it: “Nope. This tastes like a birthday cake vomiting.”

Who needs red velvet cupcakes with the icing piled all on top when you can have it perfectly sandwiched between two crisp Oreo cookies instead?

Who needs the moon when you’ve got vegan Moon Oreos with a purple marshmallow creme filling?

Now you can enjoy a latte-flavored biscuit alongside your actual latte.

Oreo teamed up with Baskin-Robbins to create these Mint Chocolate Chip cookies which have both mint creme and chocolate creme. They’ll be available in mid-July.

This treat features two Golden Oreo cookies filled with maple-flavored creme. The catch? You’ll have to wait until August to get your hands on them.

Halloween Oreos are a scream. These festive snacks come with bright orange creme. 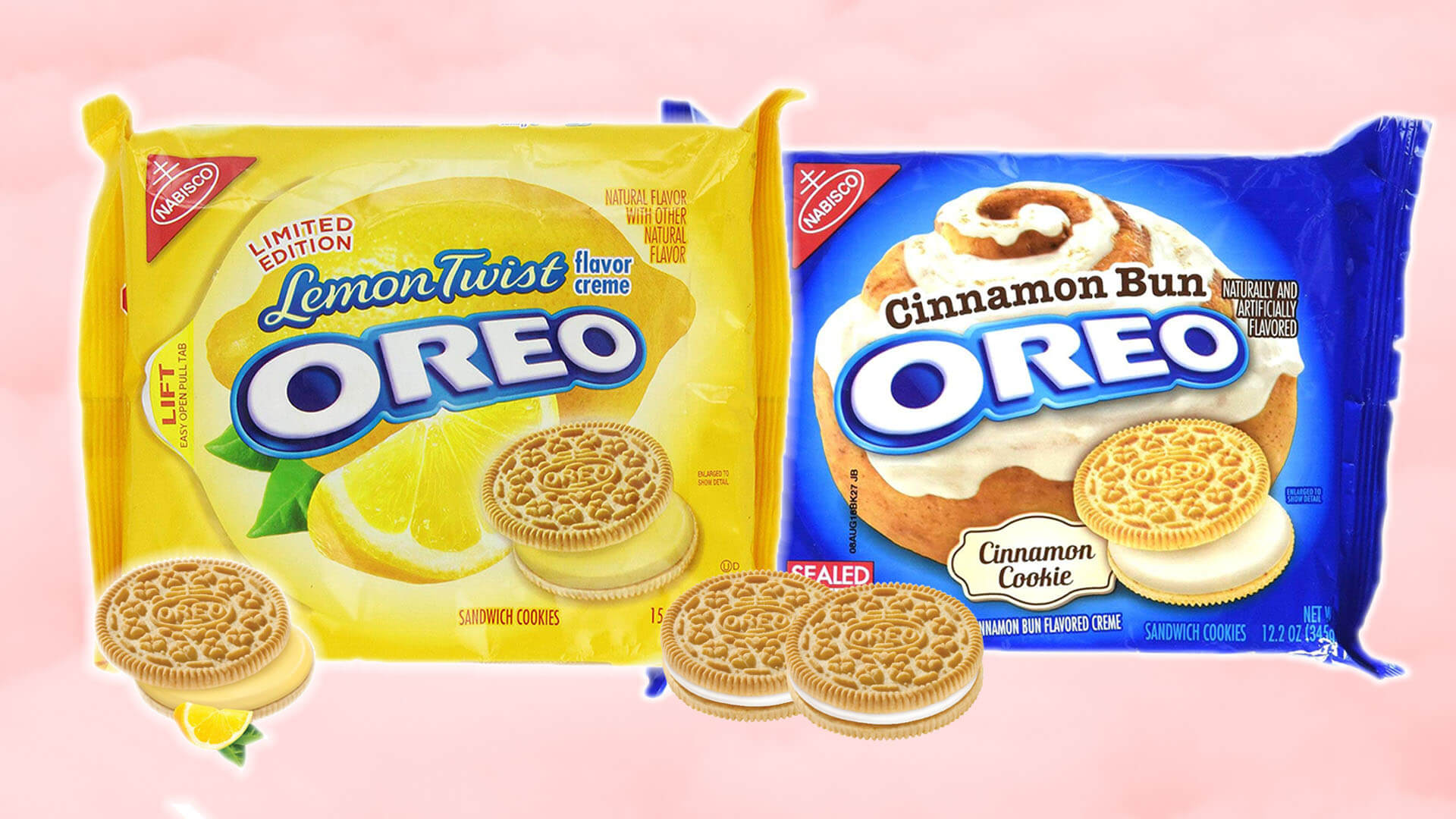