By Hazel and Cacao
Jump to recipe

I adore galettes! They are the best type of fruit pie. Until recently I’ve been resorting to vegan puff pastry for my galettes. They do turn out amazing. However, I’m not comfortable eating loads of puff pastry because not only does it contain refined white flour⁠—which I try to avoid for multiple health reasons⁠—but most store-bought puff pastry is also loaded with margarine (not the healthiest) and lots of chemical preservatives.

I think the trick was using psyllium husk as an egg replacer. I think it works by getting jelly-like in texture once it meets some liquid. So it acts as a great binder! I also love it because it doesn’t impart any flavor like other vegan egg replacers that I like to use (banana and applesauce) and is way easier to use than flax or chia seeds. It’s also basically straight fiber, which is so important for a healthy gut⁠—provided your gut is not compromised in some way.

The basic rule is one teaspoon of psyllium husk thrown in together with the dry ingredients per one egg that you would like to replace. Most galette recipes I’ve seen only require one egg, so one teaspoon is enough! You can, of course, use one tablespoon of ground flax seeds mixed with three tablespoons of water instead of psyllium husk if you prefer. But, in my opinion, using psyllium husk is so much easier than grinding down flax seeds and then allowing them to sit in water to turn to jelly.

The pastry is very easy to use. It’s stretchy and smooth without being sticky. Yet, it will hold together really well. It doesn’t rise much, so it doesn’t feel much like a puff pastry at all. But it does resemble a dense pie crust. I’m so excited about this galette pastry recipe! I can’t wait to try more flavor combinations! Pretty sure I will be repurposing the pastry for lots of other creations as well. The recipe is low gluten, dairy-free, refined sugar-free, and delicious! Enjoy! 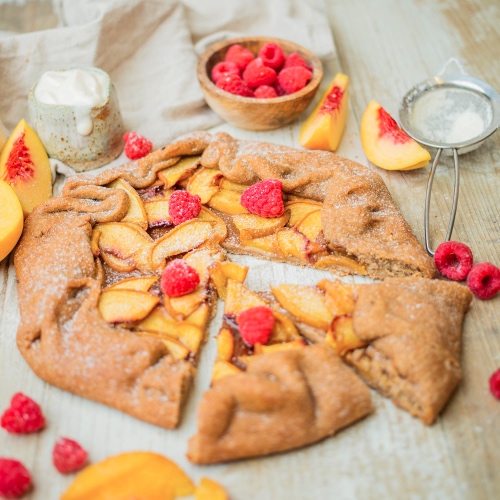 Desiring more delicious fruit pie recipes? Try making this vegan raspberry pie. It features a tasty, crumbly, and buttery shortcrust that is sure to have you going back for seconds.