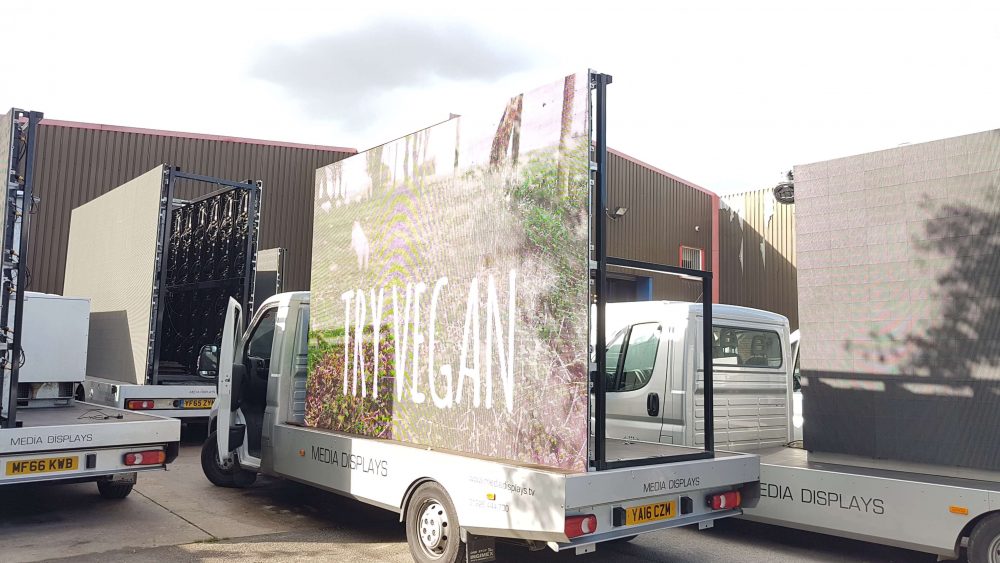 British animal rights charity, Viva! is set to tour some of the UK’s biggest cities with a mission to get the public to re-consider their dietary choices.

They say: “As a nation of animal lovers, it is not surprising that Britain is seeing a steady decline in the demand for animal based products. Bristol-based animal welfare charity, Viva!, want to encourage more people to opt for a compassionate lifestyle and are using an unconventional technique to reach the masses.”

The video van will display footage exploring the “stark comparison between the lives of pigs on a sanctuary to those in factory farms destined for the dinner plate”.

Viva! and Dean Farm Animal Sanctuary do incredible work to help animals in the UK and just this year rescued a sow named Hope and her six piglets from her slaughterhouse destiny. The family of 7 noticeably reaped the rewards of their new found freedom and this is exactly what inspired the team at Viva! to run the Video-Van campaign.

Pigs are kept inside, in squalor, amid disease and death and are subjected to countless barbaric farming practices. One of the ‘humane’ the methods of slaughter for pigs in the UK is by gas chamber and is supported by major supermarkets such as Tesco, ASDA, Sainsbury’s, Lidl and Waitrose.

Last year, a survey carried out by the charity found that a staggering 80% of people were not aware that pigs are killed at just six months old, despite having a natural life expectancy of around 15 years old. Additionally, 40% didn’t know that cutting the end of piglet’s tails without anaesthetic isn’t illegal.

In addition to the video van campaign, Viva! will also present the opportunity to view undercover footage taken from UK factory farms on virtual reality headsets.

“We want the British public to make the connection between the beautiful, intelligent beings shown on our film and the meat that ends up on their dinner plates. By using the video van we can show this footage to a range of audiences that otherwise wouldn’t see it. The powerful comparison we’re showing will capture their attention and hopefully their hearts. In today’s society there are so many delicious alternatives to animal products, there has never been an easier time to try vegan.”

To show how delicious a meat-free diet can be, Viva! will also be giving free samples of meat-free sausages in each city.

The van will tour the following cities between Monday 2 October and Sunday 8 October – Vegan or not, be sure to bring your friends and show your support: