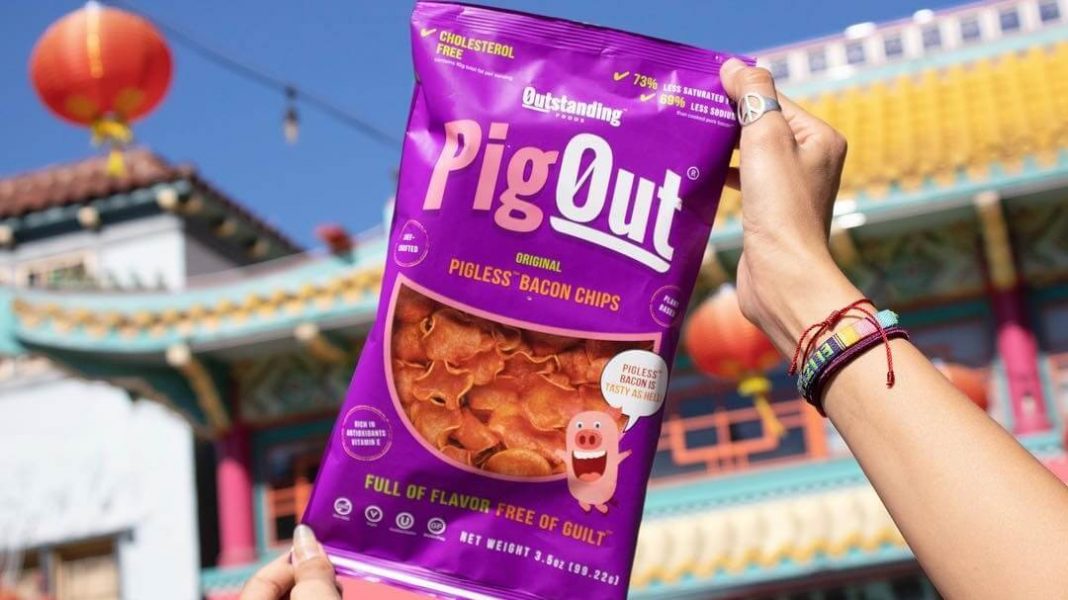 Outstanding Foods was born out of a desire to make cruelty-free, plant-based living as accessible as possible. “People want to eat mindfully but without sacrificing taste or texture,” the company states on its website.

The brand is confident that its Pig Out vegan bacon chips will help customers do just that. The chips are available in a variety of flavors including Original, Cheddar, Chipotle, and Kansas City BBQ.

Former Beyond Meat chef and JUST co-founder, Dave Anderson creates the “no chemicals, no cruelty” chips with generous slices of mushroom and expert seasoning skills. The snack is described as crispy, crunchy, savory, and satisfying and is said to so closely resemble the taste of bacon that “even meat lovers struggle to distinguish it from the real thing.”

To get the verdict, the company handed out samples to passersby on the street, with people naming the product “addictive.” One taste-tester, who incidentally is the owner of a steakhouse, was blown away by the meat-like chip, saying, “Holy [expletive], it tastes like bacon.”

Double tap if you’re already planning to put #PigOutChips in all your sandwiches ?????

While the company maintains that “taste comes first,” the snacks still deliver a multitude of health benefits when compared with traditional bacon.

Pig Out chips are high in the antioxidant vitamin E, and contain 73 percent less saturated fat and 69 percent less sodium than cooked pork bacon. Since they are made without animal products, the mushroom-based snack is free from cholesterol.

The chips have already attracted the attention of celebrity investors. Actor Steve-O, best known for his work in the “Jackass” series, sampled and enjoyed the chips prior to their official launch. Actor Emily Deschanel, an investor in Outstanding Foods, has openly praised the Pig Out Chips.