Last August, fast-food chain Popeye’s launched a chicken sandwich that sparked a craze. Thankfully, you can opt for a vegan version without missing out on the flavors you love.

Not only is choosing a vegan chicken sandwich kinder to hens, which are sweet, affectionate, and social birds, but it’s also better for the planet. According to Michigan University’s Center for Sustainable Systems, meat has the largest carbon footprint compared to other foods. Poultry, in particular, is the fourth-largest source of per serving food-related carbon emissions. But, plant-based foods like grains and legumes — which are used to make vegan chicken — have significantly smaller carbon footprints.

The Best Vegan Chicken for Sandwiches

You can make your own vegan Popeye’s chicken sandwich using vegan chicken products. For example, this recipe by Lauren Toyota uses Gardein Chicken Scallopini. You can get vegan crispy chicken at Trader Joe’s. Gardein, Quorn, MorningStar Farms, and Boca also make breaded meat-free chicken that is perfect for serving on a sandwich. 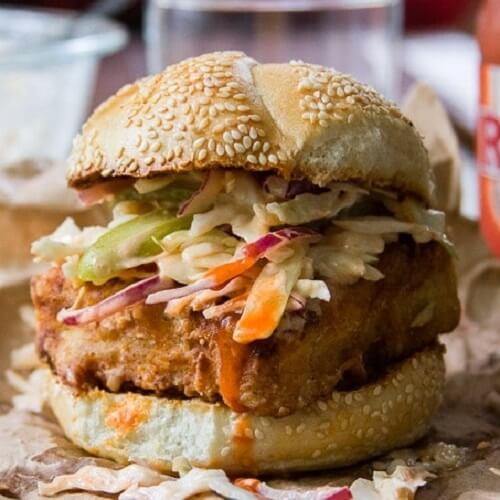 How to Make Your Own Vegan Fried Chicken

You don’t need to use vegan chicken substitutes to make your sandwich. You could also use tofu, like in this recipe from Connoisseurus Veg. Here, blogger Lauren Hartmann of Rabbits and Wolves makes a crispy vegan chicken patty from chickpeas and seitan, a type of plant-based meat made from vital wheat gluten. Seitan has a high protein content and meaty texture, so it’s a popular ingredient for making vegan meat (although it’s experiencing a boom in western restaurants, its recorded use dates back to 6th century China).

You can also use seitan alone to make vegan fried chicken, as in this recipe by “The Edgy Veg” cookbook author Candice Hutchings. Making your own vegan meat is a hands-on approach. Like bread dough, it requires kneading, but you can also use a stand mixer with a hook attachment to get the job done.

Or, you can seek out restaurants near you that serve a vegan version of Popeye’s chicken sandwich. Some major fast-food chains, such as A&W Canada and KFC in the U.S. and Canada have trialed vegan chicken, so maybe in the not-too-distant future, you’ll be able to get a meat-free sandwich from your local KFC. From the US to the UK, here are some of the top restaurants that make a meat-free version that’s even better than the real thing. 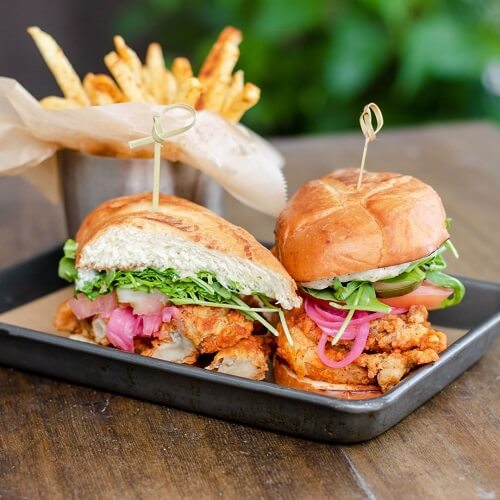 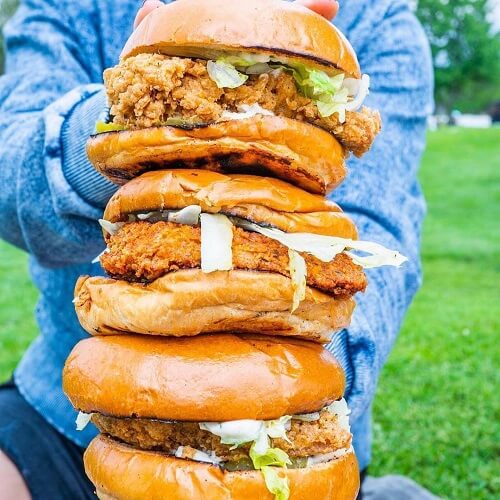 Hailed as London’s first vegan fried chicken shop, Temple of Seitan specializes in housemade vegan meat, breaded and fried to perfection. It has three chicken sandwiches on offer — the Temple Burger, the Temple Spicy, and the Nashville Hot — inspired by America comfort food. 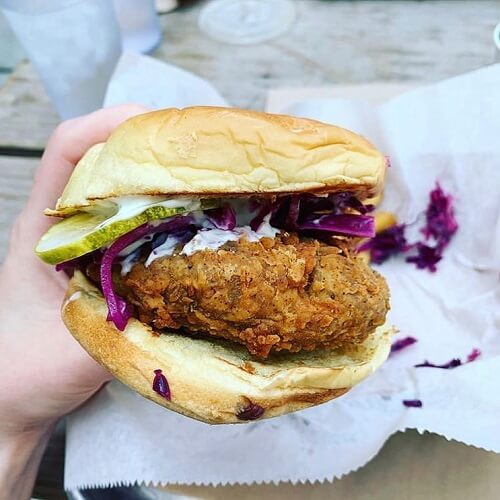 Ka’Lish is an all-vegan eatery based in Uptown Chicago. The restaurant aims to make vegan food that appeals to everyone. All of the plant-based meat is made in-house from a variety of ingredients. The vegan fried chicken in the Clucker Crisp sandwich, for example, is made from vital wheat gluten and chickpeas. 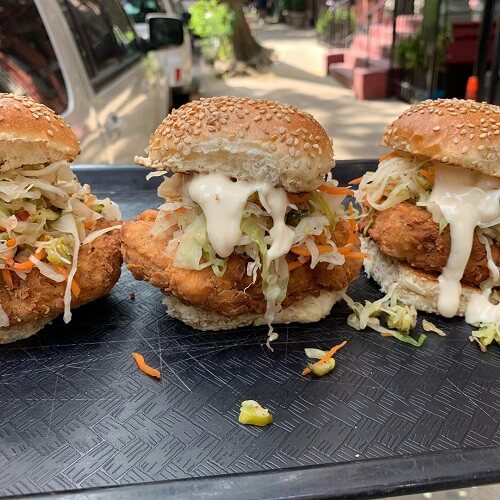 You can only get the TFT — a crispy slab of tofu with special sauce on a sesame seed bun — at New York City’s Superiority Burger, on Mondays after 6. It’s a rare moment when you’ll walk by without a line, but fans of Superiority Burger consider it well worth the wait. 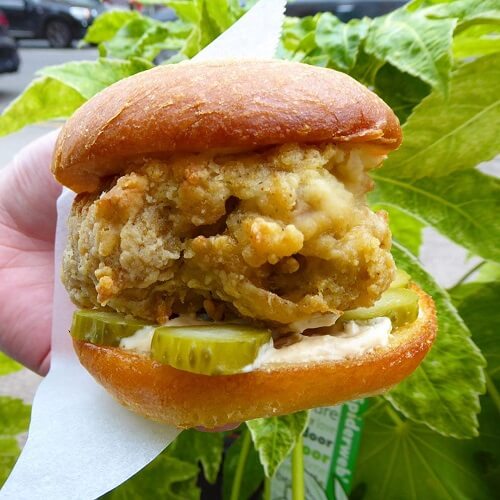 Based in Glasgow’s west end, Serenity Now Cafe is a vegan restaurant that promises food “made with love and care.” Its vegan chicken sandwich features a crispy piece of its secret-recipe housemade seitan, plus pickles. 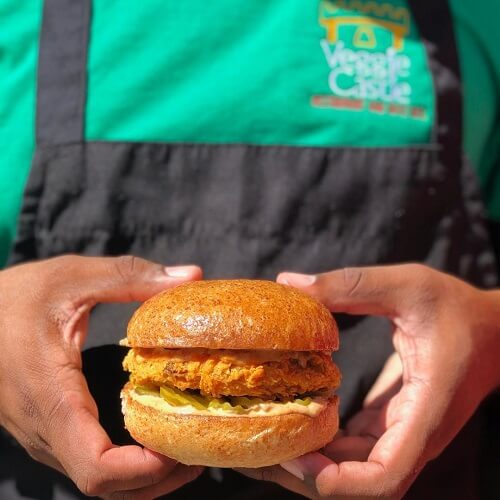 Often considered among New York City’s best vegan restaurants, Veggie Castle is a family-owned joint located in South Richmond Hills, Queens (it will make its celebrated return to Brooklyn around Labor Day 2020). Even though it specializes in vegan Caribbean fare, its sandwich menu is a force to be reckoned with as well. Try the fried oyster mushroom sandwich as well, which has a fried chicken-like texture. 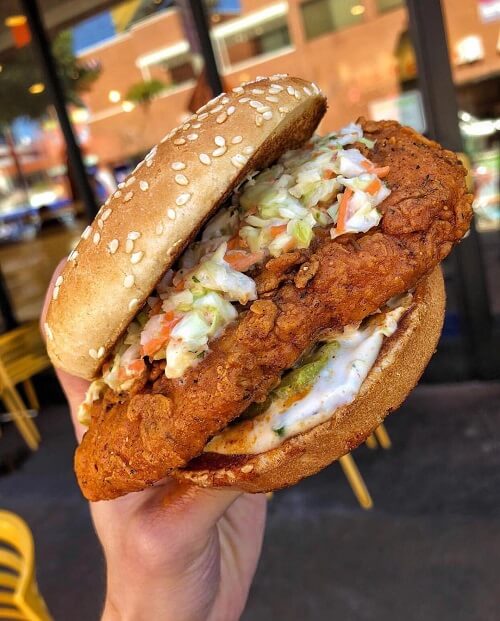 With more than 30 locations in the U.S., mainly based on the west coast, Veggie Grill has a couple of vegan chicken sandwiches on offer. The best-selling Santa Fe Crispy Chickin’ consists of a meatless chicken patty with lettuce, tomato, red onion, mashed avocado, and spicy mayo. The Nashville Hot Chickin’ comes with crispy chicken, hot sauce, coleslaw, charred scallion ranch, plus bread and butter pickles. 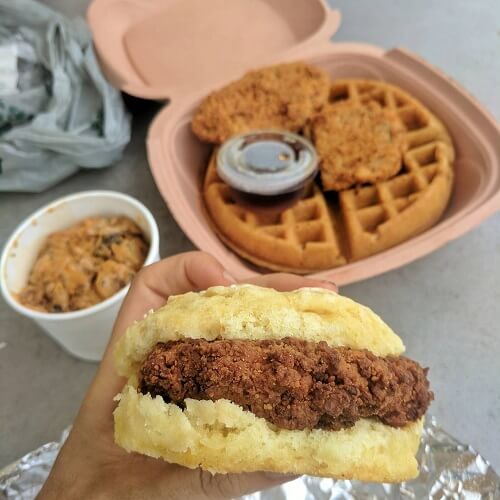 Vegan chicken on a biscuit at The Southern V. | @blackmagicsquirrel

The Southern V is a popular vegan eatery based in Nashville, Tennessee. The family-owned restaurant specializes in ultra-comforting, vegan Southern-style food. There are two meatless chicken sandwiches on the menu: the Chik’n Sandwich, with housemade crispy seitan, chipotle mayo, lettuce, tomato, and red onion on a potato bun. Or, there’s the spicy Nashville Hot Chik’n Sandwich. Either sandwich can be served on a biscuit. According to the website, “Our dishes are flavorful + tastebud-tingling and sure to make the most skeptical person take another bite!” 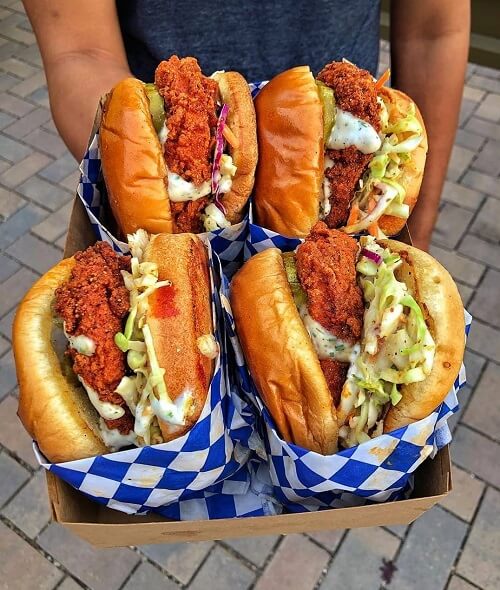 Don’t be fooled by the name — Lettuce Feast in Los Angeles specializes in housemade vegan fried chicken. There are three sandwiches on the menu that you can customize with hot sauce ranging from Original (No Spice) to the daunting-sounding Reaper.