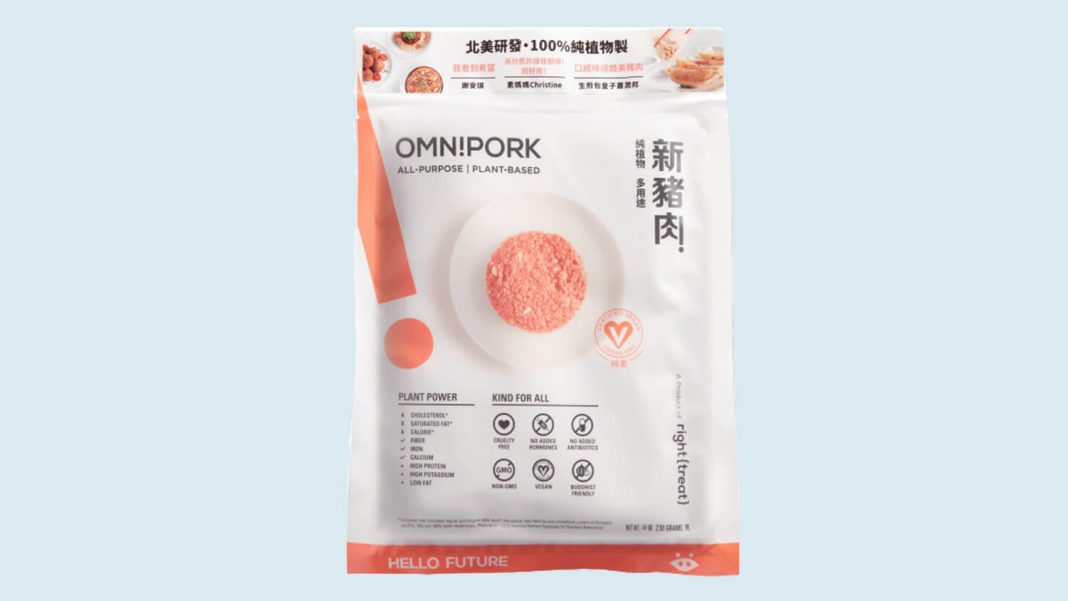 First announced back in April, the vegan superfood looks tastes, and functions just like pork, but without the environmental and ethical impact.

With the introduction of the product, Right Treat – founded by entrepreneur David Yeung – hopes to disrupt the global pork industry. Yeung also created nonprofit Green Monday, which helps to promote sustainable, green living in Hong Kong, and the plant-based grocery chain Green Common where the pork will make its retail debut.

Around the world, nearly 40 percent of all meat consumed is pork. In China, the food is particularly popular, where pork consumption outnumbers beef by seven to one. Because of the nations’ love of the meat, around 700 million pigs are raised for pork every year – producing 1.29 billion metric tonnes of livestock waste, which is linked to both air and water pollution.

Omnipork retail pack PRE-ORDER* now available at ALL Green Common. $43/230g,  you can also enjoy 10%off for any 3 packs. Come and Take Order NOW!!! . . *Pre-Order period: now to 25 Nov. Redeem period: 26 Nov to 9 Dec at your order shop. Image for reference only. @omnipork @green_common @greenmonday_official

Pork consumption is also risky for human health. Processed meat intake is linked to cardiovascular disease, obesity, and cancer; the pork industry is also linked to antibiotic resistance, as pigs are routinely pumped full of antibiotics to kill off infection.

“Omnipork offers high-quality complete vegan protein to fulfill our body,” Yeung said earlier this year. “It is also cholesterol-free, antibiotic-free, hormone-free, cruelty-free, and 71% lower in saturated fat and 62% lower in calories than real pork while offering much higher fiber, 233% higher in calcium and 53% higher in iron.”

Up until now, the vegan pork has only been available from certain restaurants and hotels, including the JW Marriott. Green Common already offers a number of vegan meat products, including the Beyond Burger – created by southern California plant-based brand Beyond Meat – and Meatless Meatballs, made by Canadian vegan meat company Gardein.

According to Green Common, the Omnipork retail pack is available for pre-order until November 25.