Stephen and David Flynn, known as The Happy Pear, are launching three new vegan dinners in Ireland. The meals, which will be available from Happy Pear SuperValu stores all over the country, are all 450 calories or less and vegan-friendly.

The healthy vegan dinners come in three different flavors: Veggie Korma, Chilli no Carne, and Chickpea Curry. Each meal has a vastly different flavor but each is made with “2 out of your 5 a day.” These meals are quick and easy to make; however, they don’t skimp on wholesome flavors and ingredients.

The creamy coconut Veggie Korma is made with fragrant brown rice with fresh spinach and is mildly spicy with its Indian-inspired flavors. The Chilli no Carne takes its inspiration from Mexico, with its combination of black beans, a mildly spicy tomato sauce, yellow rice, and fresh coriander, the dish is a tasty source of protein and fibre. Finally, the Chickpea Curry, like the Veggie Korma, brings the taste of India to Ireland. It’s made with veggies, chickpeas, fresh broccoli, and brown rice. 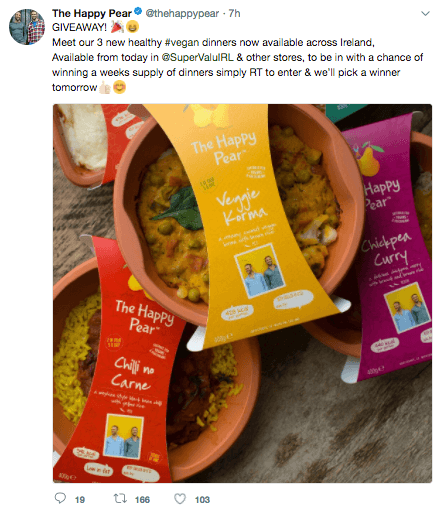 In honor of their new launch, the Happy Pear announced on its website: “To celebrate the launch of our new veggie meals, we are offering one lucky person the chance to win their SuperValu shop on us*! Head over to supervalu.ie to find out more!”

The Happy Pear formed back in 2004 with a small veg shop. Dave and Steve traveled the world and, while on nearly opposite sides of the world, both switched to a plant-based diet within a week of one another. Over the next 14 years, they continued to grow with the launch of a shop, then a cafe, then a farm, and now a product range and roastery.

The Happy Pear also has an upcoming cookbook entitled, “The Happy Pear: Recipes for Happiness.” The book is available for pre-order and will be released on May 3rd, 2018.