The pop-up freezer features nine vegan dishes that anyone can “self-checkout” and heat-up for lunch or dinner. The delivery company makes meals like Sheperd’s Pie, Cashew Mac, Keralan Sundown, and Sweet and Sour Tofu.

“As part of encouraging millions of people to fall in love with plant-based food, we’ve always aimed to make every delicious recipe our chefs create easily available to everyone, any time,” allplants wrote online.

The first freezer made its way to Huckletree in May. Huckletree is a co-working and private studio space in London that aims to unite diverse and “disruptive” startups, according to its website.

“Your office, or gym, could be next,” allplants said.

On its website, it assures that frozen meals aren’t any less nutritious than fresh. The company hopes it can help people reduce their environmental footprint as well as improve their health with its “super delicious, always nourishing, ever planet-positive” vegan food. 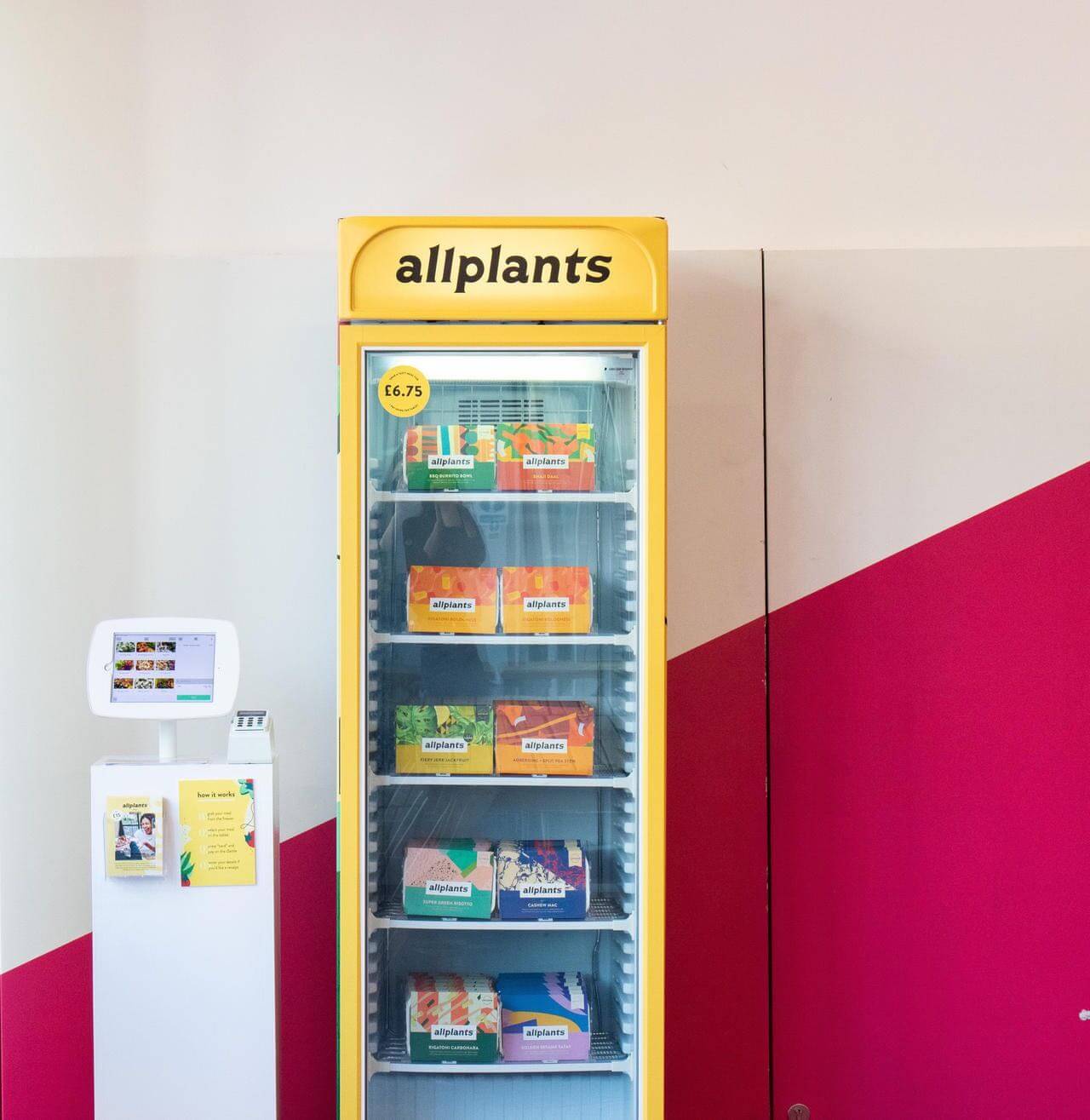 The vending machine is stocked with frozen vegan meals | image/allplants

Allplants isn’t the first to launch a vegan vending machine in the UK. Bristol is home to two chilled vending machines — named Violet and Daisy — that offer vegan wraps, sandwiches, snacks, and desserts made by local businesses.

Coronation Chickpea Sandwiches, Vegan Sausage Sandwiches, Sweet Potato Pakoras, and Bakewell Slices are available, among other snacks. The machines, which were launched by Vegan Vend, are decorated with the work of local artists.

The idea is becoming popular outside of the UK, too. Last year, Canada got its first plant-based vending machine when The Green Moustache Organic Café installed one inside a Whistler sports center.

It’s restocked daily with freshly prepared organic and gluten-free vegan meals as well as snacks and desserts. The Green Moustache Chief Strategy Officer Geoff Telfer said about the project, “We believe these modern vending machines are an efficient and sustainable way to expand our reach and to further our mission of bringing health-promoting, nutritious food to every neighborhood.”

This year, another vegan machine popped up in Canada, this time in Vancouver. It was launched by vegetarian grocery store Larry’s Market in a bid to “disrupt the current food paradigm and the misconception that it’s hard to eat healthy when you’re busy,” according to co-founder Joe Kerby.