Updated August 10, 2019. Vegan ice cream made from whey without the cow may soon be a reality.

Food tech startup Perfect Day launched vegan ice cream unlike any dairy-free ice cream that’s come before it online last month. For a limited time only, it was available in in three flavors — Salted Vanilla Fudge, Milky Chocolate, and Vanilla Blackberry Toffee. A bundle of three cost $60 and the first batch was limited to 1,000 sets. The pints were gone sooner than expected.

“The Perfect Day team was absolutely thrilled with the consumer response and the ice cream sold out before the end of the day,” Perfect Day told LIVEKINDLY in an email. 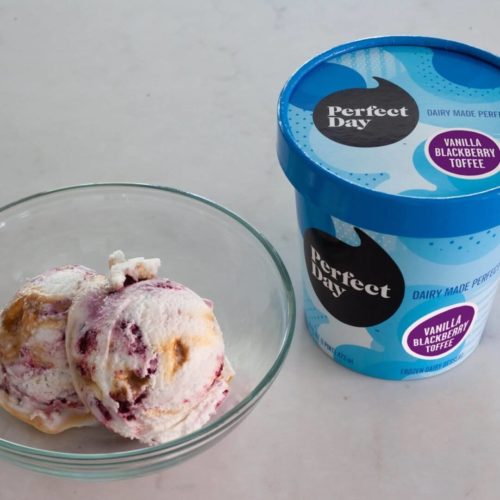 Perfect Day’s vegan ice cream sold out before the end of the day. | Perfect Day

Founders, biochemists, and vegans Ryan Pandya and Perumal Gandhi use flora fermentation to make milk without the cow. It started with obtaining a strain of yeast from the U.S. Department of Agriculture, as reported by Forbes. They then 3D-printed a cow’s DNA sequence and inserted it into a specific location of the yeast.

The yeast then ferments the sugar creating whey and casein — proteins found in cow’s milk — that are molecularly. identical to the real thing. In contrast to cell-based meat, where real meat is grown from animal cells, the end result is completely vegan.

“What we’re doing here is completely new to the world,” Pandya said in a press release about the ice cream. “We wanted our first debut to be under the care of our own brand so that we could demonstrate the consumer benefits inherent to our protein while starting a conversation about this new approach to making food.”

Some future products may use Perfect Day, but not the brand’s label, thanks to a partnership with global ingredients giant ADM. Pandya told Food Dive that ADM has the tools and resources to produce the brand’s dairy-free dairy. A few products won’t do — Perfect Day wants to make a positive impact on a global scale.