Dairy-based Red Leicester cheese is made in a similar way to cheddar but is typically more moist, crumbly, and holds a milder flavour.

Morrisons’ dairy-free Red Leicester cheese, which is made using coconut oil and potato starch, contains less saturated fat than its dairy counterparts and has no cholesterol. 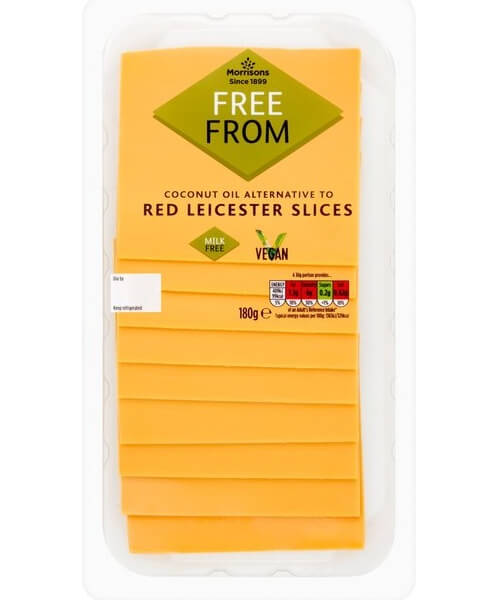 The dairy-free cheese is made with coconut oil

More people are shifting away from dairy for health, ethical, and environmental reasons. Research from earlier this year found that more than a quarter of people aged between 18 and 24 in the UK are reducing their intake of, or have entirely cut out, dairy.

Tapping into this growing demand, many companies are creating new dairy-free products. In the U.S., Whole Foods Market recently released a range of vegan cheese products under its 365 Everyday Value brand. Flavours include cheddar and mozzarella, which according to the brand, are perfect for melting.

Stepping away from common cheese flavours like cheddar, some are working to make blue and French cheeses from plant-based ingredients.

Vegan food company Spero Foods is making dairy-free products out of sunflower seeds. Its range include several varieties of chèvre and camembert as well as a vegan cheesecake.

Research chef Maynard Kolskog developed a vegan blue cheese made from fermented oats at the Northern Alberta Institute of Technology. The research was part of a partnership with the Prairie Oat Growers Association.