Vegan restaurant Nic’s on Beverly is paying homage to the Black Lives Matter movement with a mural. The Los Angeles-based eatery had the names of Black people killed by police brutality painted on the side of its building.

The mural includes a list of nearly 100 names, including Sandra Bland, Philando Castile, and Mya Hall.

It also features a black star with a portrait of George Floyd painted in its center. The restaurant’s door now features the words “Black Lives Matter.”

Constantin Le Fou, founder of the Vegan Club and one of the mural’s painters, shared a video on Instagram of himself and fellow painter, Elisa Yarnell, in the process of putting up stencils. “BTS of yesterday’s mural at Nic’s on Beverly. Zero sleep, red flag heatwave, and wind blowing off the stencils. All worth it,” he captioned the post.

“The recent events motivated me passionately to create an art piece that honors all of these victims and give them appropriate homage,” he told LIVEKINDLY.

Nic Adler, the owner of Nic’s on Beverly, took to the restaurant’s Instagram to denounce racism. Adler revealed the restaurant’s operations manager, Stephane Bombet, was “no longer associated” with the restaurant. This came after a photo of him wearing blackface surfaced from 2011.

“Racism of any kind is not tolerated,” Adler wrote. “We believe strongly in inclusion and respect for all, and apologize for any hurt his actions may have caused. We stand firmly with the Black community in the fight for long-term systemic change, justice, and equity.”

Bombet was also an operator of Los Angeles-based restaurants Faith & Flower and Ms Chi Cafe. Both restaurants released statements saying that Bombet was no longer associated with the eateries. 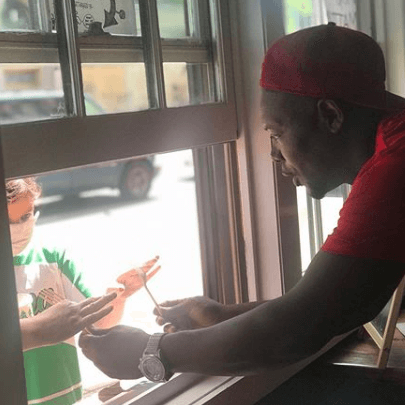 A number of vegan restaurants around the country have voiced their support for the Black Lives Matter movement.

Los Angeles-based Suncafe announced it would donate 100 percent of its profits to support the Black Lives Matter movement. It revealed profits from June 3 to June 6 would go to two charities: Campaign Zero and The Bail Project.

Earlier this month, Trio Plant-Based—a Black-owned vegan restaurant in Minneapolis—also showed support for the movement. It gave out 300 free meals to the community.

Louis Hunter, the owner of the restaurant, is the cousin of Philando Castile. Police shot and killed Castile, a Black man, during a 2016 traffic stop.

Vtopia—an all-vegan restaurant and cheese shop in Portland—revealed in a statement that it donated a portion of its proceeds to the Black Movement-Law Project to aid the organization in its efforts to support activists and educate local community groups.

The restaurant encouraged its employees to support local Black-owned vegan and non-vegan restaurants. It also said it reached out to the restaurants “in the hopes of collaboration” with the intention of “further [amplifying] their voices, businesses, and cuisine.”