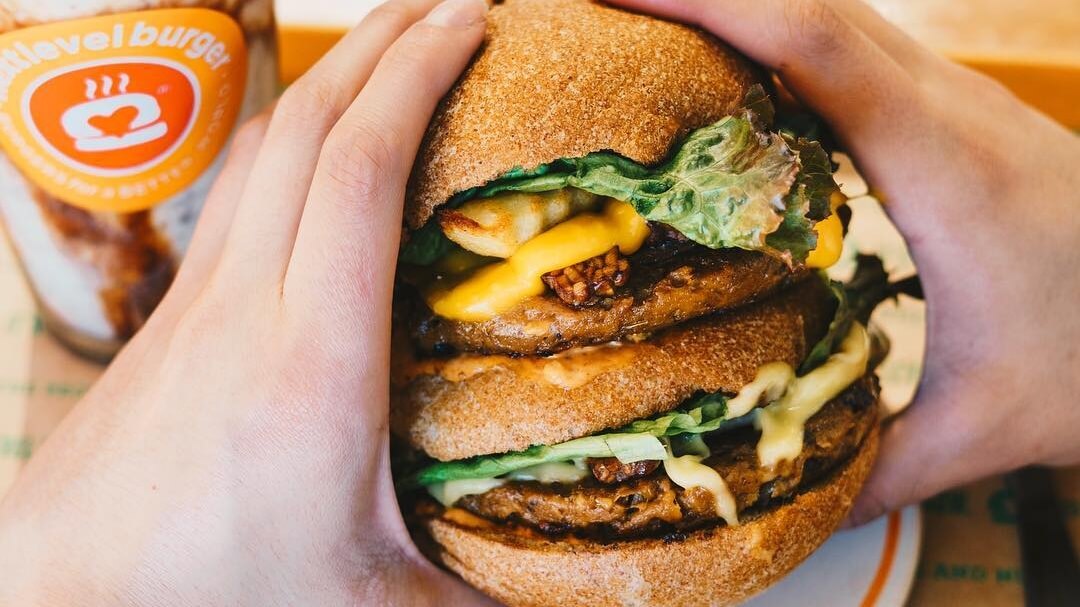 The chain, which currently has locations in California, Oregon, Washington, and New York, serves up a variety of “meaty” burgers, vegetable patties, and mushroom-based burgers with a selection of vegan cheeses, tempeh bacon, avocado, and egg-free mayo. Hot dogs, sandwiches, and salads are also on the menu, along with a variety of soy or coconut-based milkshakes in flavors such as Salted Caramel Peanut and Mint Chocolate Cup.

The chain has a partnership with Beyond Meat and uses its plant-based “bleeding” burger patties in a selection of its menu items. In celebration of the 4th of July, the chain launched the Kraut Dawg, featuring vegan Beyond Sausage Hot Dogs. “Next Level Burger is jazzed to celebrate this year’s Independence Day with the debut of the Kraut Dawg, NLB’s take on the evolution of the backyard brad – featuring the game-changing Beyond Sausage from Beyond Meat,” said CEO Matt de Gruyter. “Cheers to liberty and justice for all!”

Founded in 2014 by de Gruyter and his partner Cierra, Next Level Burger aims to create “burgers for a better world.” Its website notes, “Next Level Burger has core beliefs that drive what we do every day. Our whole-hearted belief in healthy eating for people and the planet shows with every responsible sourced, organic, GMO-free, awesomely delicious meal served.”

The chain has no intentions of slowing down its plant-based mission anytime soon. De Gruyter announced at the beginning of the year that within the next decade, he will open 1,000 more restaurants, growing the company “aggressively and wisely.”

But the vegan business has competition. As consumers wake up to the health and environmental risks of eating animal products, the food industry is having to adapt rapidly. In the last few months, major chains such as White Castle, The Cheesecake Factory, Applebee’s, and Umami Burger adapted their menus to include the Beyond Burger’s main rival, the plant-based Impossible Burger by Impossible Foods. “The enthusiasm has remained pretty constant,” White Castle VP Jamie Richardson noted in June. “This illustrates that we’re not just getting first-time purchasers.”

The new Next Level Burger restaurant in Austin is set to open this fall.