Scott Jurek is an ultra-endurance vegan athlete who has inspired thousands of people to lace up and run. He is considered to be one of the greatest and most influential long distance runners of our time, gaining fame through his incredible athletic accomplishments, but also through his rich storytelling.

Jurek holds several victories and world records at some of the most grueling road and trail races on earth, including the Badwater 135-Mile Ultramarathon, the 153-Mile Spartanthon, and the Western States 100-Mile Endurance Run. He attracted attention to the sport of endurance running and the vegan lifestyle via his best-selling breakthrough novel, “Eat and Run.” Now, Jurek has taken on a new challenge, and documented it in his upcoming book, “North: Finding My Way While Running the Appalachian Trail.”

“North” marks the end to Jurek’s established competitive running career. In 2015, he decided he would attempt to leave his legacy by setting a new record to run the entire length of the Appalachian Trail. To be successful, Jurek would have to run 2,189 miles in forty-six days. Spoiler alert – he did it. Jurek completed the challenge in forty-six days, eight hours, and seven minutes beating the previous record by three hours and thirteen minutes.

Of course, this feat was not accomplished alone. Jurek’s wife and co-author, Jenny, supported his journey by leading the crew team. Jenny is a committed vegan and ultramarathoner herself, and without her help, Jurek would not have been able to receive both the physical and emotional support he needed to fuel him through those demanding days. This relationship dynamic adds an additional layer to “North.” It is not just a book about running. It is a book about the strength of the marital bond, pushing it to its limits, and giving your all to another with no expectation of something in return. Anyone who has been in a relationship can relate; it doesn’t take forty-six days in the woods to know what true love and struggle feel like. 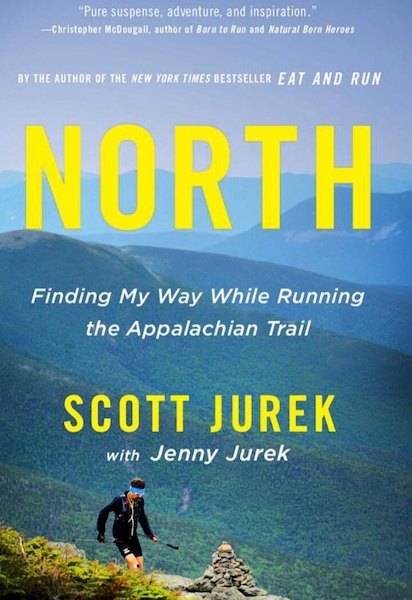 Like his first book, “Eat and Run,” Jurek’s journey is nothing less than inspirational. He and Jenny paint vivid scenes throughout the book. The reader runs along with them, relating to Jurek’s physical pains and emotional anguish, but also riding the highs that only running can provide. During this challenge, Jurek ran an average of fifty miles a day through unpredictable weather and rough terrain. This includes constant rain and traversing uneven, rocky trails, sometimes in the dark. To fuel and nourish his body to withstand the unending physical strain, Jurek ate an average 6,000 calories of vegan food a day. Both on the trail and throughout his career, Jurek has faced challengers who question his plant-based lifestyle, but Jurek has certainly proved them wrong both through his actions and his written words.

“North” is a piece of non-fiction, it reads like a beautifully written novel that tugs at all of the reader’s emotions. It is suspenseful, gripping, and awe-inspiring. Runners and non-runners alike will find it both entertaining and motivating. Not everyone will set out to run the Appalachian Trail, but they may feel the urge to go the extra mile.

“North” will be released at major bookstores and Amazon on April 10.