The first UK series of RuPaul’s Drag Race premieres later this year on BBC Three. And Scaredy Kat, a vegan queen from Wiltshire, is ready to strut her stuff.

The 20-year-old student — among the youngest competitors in the show’s decade-long history — is one of 10 contestants taking part in the show’s first UK series. The fierce vegan queen was inspired by her girlfriend — a bio queen (a cisgender woman who does drag) and fellow vegan who goes by the moniker Pussy Kat — to start drag. 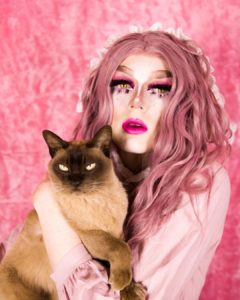 Scardey Kat’s drag name is partly based on her girlfriend’s, but she revealed in an interview with Radio Times that it’s an accurate reflection of her personality: “I came up with my drag name because I’m just a bit of a p***y really, and I’m scared of everything from answering the phone to going on Drag Race. It’s all the same to me.”

The baby queen — a drag term for new or young queens — also sees this as her greatest strength: “My greatest strength is probably the fact that I’m terrified of everything. I haven’t got masses to prove, but then again I’ve got barely any experience.”

Her fashion sense is a step away from the traditional pageant look, favoring frills, faux fur, and soft, feminine colors. In an interview with Gay Times, the Scaredy Kat described her look as “cute, pink, fluffy and possibly annoying.”

Scaredy Kat also hopes to be a positive representation of bisexuals, who are often erased or misrepresented in media as “choosing a side” or “being greedy.” She also hopes to subvert contemporary drag with her unique style.

She added, “I just want to show that you can be comfortable in your femininity and artistic creativity.”