Twin sisters from Plymouth in the UK have opened a vegan restaurant with a twist: it’s located inside an old morgue.

The Old Morgue, as its name suggests, used to house dead bodies during the war. Now, it’s a community space, which is home to escape rooms, quiz nights, and chefs Gabriela and Lucia Evangelou’s pop-up vegan restaurant The Cosmic Kitchen, which opens every Monday night.

The pair chose Mondays because of the popular veggie initiative Meatless Mondays, which encourages people to ditch meat from their plate for one day at the beginning of the week.

“More people are opening their eyes to [veganism],” Gabriela told the Plymouth Herald.  “A lot of people are becoming more health conscious. You are what you eat so you may as well fill yourself with good things.”

The sisters — who initially gave up meat, dairy, and eggs for ethical reasons, — offer a wide variety of plant-based dishes on their menu. “We call it good mood food,” said Gabriela. “It’s going down well.”

Dishes — which are served in 100 percent eco-friendly packaging if ordered to take away — include jackfruit and Caribbean curry wraps, scotch “eggs” made with potato and tofu, and comfort food options like moussaka, lasagna, and spinach parcels. 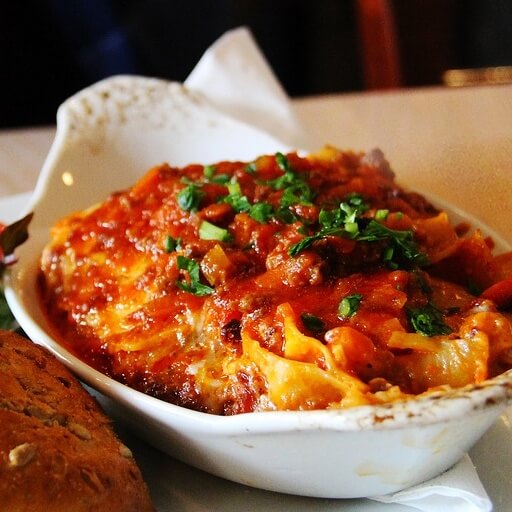 Vegan lasagna is on the menu at the Cosmic Kitchen

Sweet options are also available in the form of chocolate truffles and peanut butter cups.

So far, the “good mood food” is a hit, and not just with people who already follow a vegan diet. “It’s a strong community, everyone is so nice,” continued Gabriela. “We get a mix of people coming in, a lot of non-vegans that want healthy food.”

Plant-based food is rising in popularity across the UK. According to a study by Sainsbury’s, more than 90 percent of Brits now identify as flexitarians and are reducing their meat intake for the planet, their health, and the animals.

The Cosmic Kitchen is witnessing this rise in demand. Gabriela added, “at the moment people are coming in casually to eat… trade is steady, we get people in throughout the day.”

The vegan chef added that the Cosmic Kitchen will be expanding to fulfill consumer demand, appearing at the Freedom Community Festival at Freedom Fields Park.