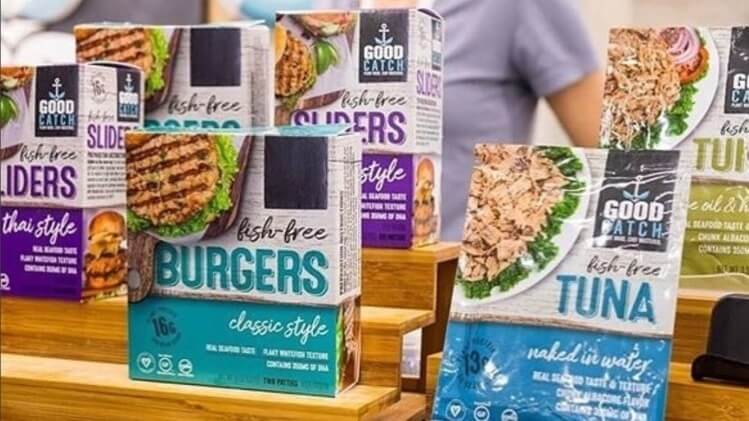 Vegan seafood company Good Catch Foods has just secured $8.7 million in a Series A funding round in order to bring its highly anticipated products to market in what is being positioned as a company that will disrupt the global seafood market with plant-based versions of crab and tuna.

The round was led by vegan venture capital firm New Crop Capital as well as other investors, including Germany’s largest poultry producer, PHW Group, retailers Thrive Market and Fresh Direct, “impact partners” such as Stray Dog Capital, Blue Horizon, Starlight Ventures, and more, as well as private investors and entrepreneurs.

“The relentless and indiscriminate killing of marine life is devastating ocean ecosystems,” said Good Catch co-founders and co-CEOs Chris Kerr and Eric Schnell in a joint statement. “The only truly sustainable seafood is seafood that allows fish to remain in the ocean. It is abundantly clear that we need a new approach to seafood. Importantly, this is a global concern and we need global stakeholders to put this approach into action; time is not on our side.”

Good Catch stresses that the world’s oceans are in danger. Over 90 percent of large predatory fish stocks are depleted and experts have predicted that the global fisheries are expected to collapse before 2050 due to overfishing. Vegan food, meanwhile, is finding favor with more consumers than ever before, though vegan seafood has not yet attracted a large customer base as categories like plant-based meat and nondairy milk have. Oceans currently serve as the world’s largest source of protein, leaving the plant-based seafood market open to emerging brands.

“The Good Catch team has built a truly world class plant-based protein, an area where we’re seeing massive growth and demand,” said Nick Green, Thrive Market co-founder and co-CEO.“We’re incredibly excited to help bring them to market in 2018 and proud to call them the third investment out of Thrive Market Ventures.”

Good Catch is set to launch its products in the U.S. before 2019.