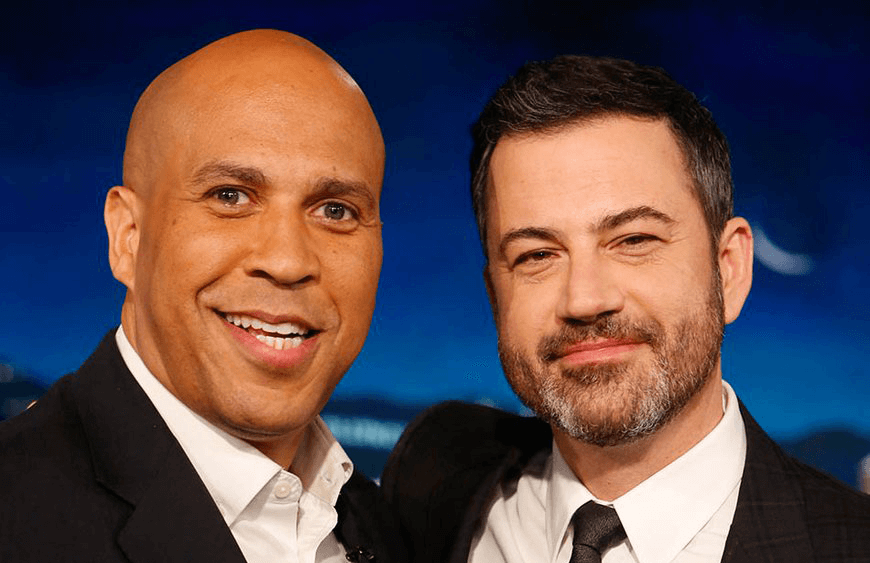 As Booker joined Kimmel on stage, the talk show host remarked on Booker’s physique. “You’re so much more muscular than I imagine you being in person,” Kimmel said as Booker took his seat. While Booker is an avid fitness enthusiast, the 49-year-old is also extremely cautious about his diet. He became a vegetarian in 1992 and has been vegan since 2014 after an awakening where he said he “wasn’t living my truth.”

Veganism seems to lend itself to more than just Booker’s physique, though. The Senator brings a refreshing level of compassion to the Senate floor, discussing the respect and admiration he has for Republicans like Arizona Senator John McCain. Talking about the Senator’s time as a POW during the Vietnam War, Booker said “it strips away the partisanship and you begin to see the public servant.”

“I always tell the tale of the two hugs,” Booker said, as he shared the story about Senator McCain’s return to the Capitol after his cancer diagnosis. “I remember crossing the Senate floor, crossing the aisle… to give [McCain] a hug,” he says, “but I get home that night and I’m getting beat up by my side of the aisle [for hugging Senator McCain].” He says a similar situation happened to former New Jersey governor Chris Christie for hugging President Obama in the wake of Hurricane Sandy. As the mayor in Newark when Christie was governor, Booker said they didn’t always agree: “I could write a dissertation on my disagreements,” but, he says, the two would get together and say “okay, where do we agree? Let’s find some common ground and build from there.”

Booker’s message of compassion is an ethos; the Senator made headlines in January when he blasted Homeland Security Secretary Kirstjen Nielsen for failing to recall comments made by President Trump where he referred to Haiti and African countries as “shitholes.”

“Your silence and your amnesia is complicity,” the agitated Senator said during the hearing.

“Have we gotten to the point in America where we are so vilifying fellow Americans that even human contact with each other is considered a betrayal of your tribe or your party or your group?” he asked Kimmel, who responded, “Yes.”

But Booker brought it back full circle to the personal freedom that is found in taking the higher ground and necessary to move us forward, referencing great achievements and an African proverb: “If you want to go fast, go alone, but if you want to go far, go together.”

“You can disagree with somebody, you can angrily disagree with them, but you can never let them or even their behavior pull you down so low as to hate them,” Booker said as he discussed President Trump, who attacked the Senator on Twitter several years ago during the presidential campaign. “My response is ‘Hey, I love you Donald Trump’,” he said. “I will do everything I can to stop you from being president, but I will never ever hate you.”