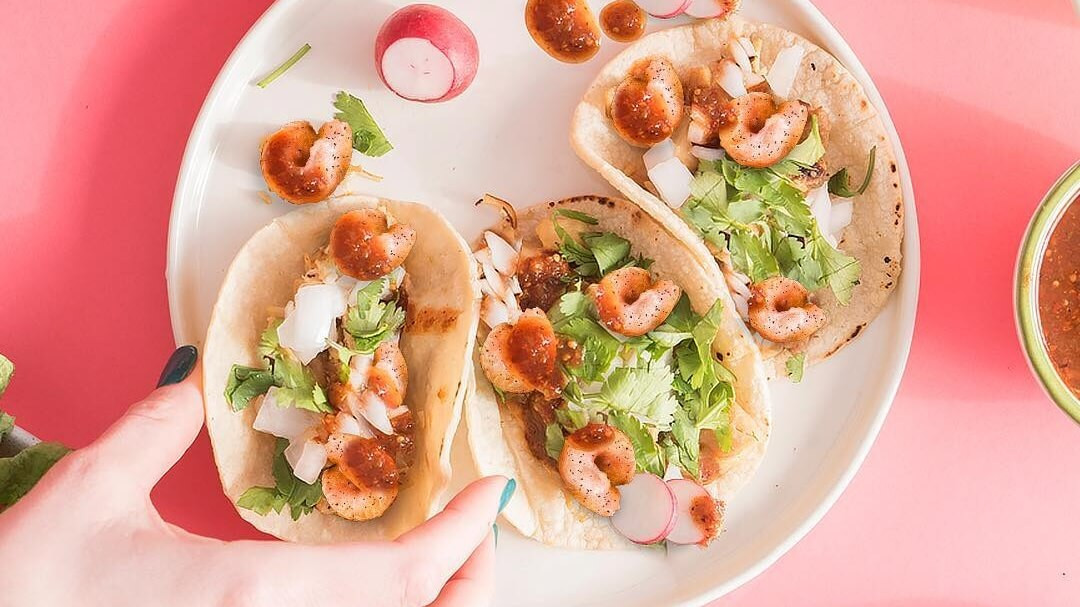 The cafe announced the collaboration between the two woman-owned businesses on Instagram: “@jfcmobile is joining the New Waves Food family and we couldn’t be more excited about serving you their amazing, amazing plant-based shrimp. SHRIMP TACOS FOR EVERYONE (in our Oprah voice) #jackfruitcafemobile #jackfruittacos #jackfruitlove #seaplants#goodvibration #love #hiangiebyeflesh ? #vegan.”

New Wave Foods is a sustainable food tech company that produces vegan shrimp made from non-GMO algae. Founded by two female scientists, Dominique Barnes and Michelle Wolf, the vegan brand aims to “disrupt seafood,  not oceans” as well as the slave labor practices rampant in the shrimp industry. Using her expertise in materials science and engineering, Wolf helped develop the cutting-edge technology used to create the algae-based shrimp. Barnes, who holds a degree in marine biodiversity and conservation, is a regular speaker in the industry about the importance of sustainable food systems.

Means, known for her role as Felisha in the 1995 cult-hit film “Friday,” opened the first Jackfruit Cafe location last October inside a King’s Donuts in LA’s Crenshaw neighborhood. The restaurant’s jackfruit-centric, Mexican-inspired soul food was such a hit with customers that Means had to work after hours in order to keep up. Eventually, the small, shared kitchen space could not sustain the high demand for vegan food and she was asked to leave the space in late February.

Last month, Means announced plans to open a new space in Santa Monica and hinted at a second location, however, for the time being, it seems that the food truck will replace the restaurant. Means’ mission is to provide the community with affordable, delicious plant-based food.

The Jackfruit Cafe’s vegan food truck will serve its plant-based fare on Crenshaw Boulevard until July 23. No further details have been provided.