These delightful Homemade Cinnamon-Sugar Vegan Graham Crackers are made in one mixing bowl and the dough doesn’t need to spend any time in the fridge or the freezer. They smell amazing while they are baking. I love snacking on them right out of the oven.

If you are making the graham crackers for a crust, you might want to skip brushing them with Earth Balance and sprinkling with cinnamon sugar. Additionally, if you are crumbing them into a crust I wouldn’t worry much about cutting them into cute shapes.

I used to dread working with parchment paper. I never tore off the correct amount and then the sides would curl up on me. This pre-cut baking sheet sized parchment paper has changed all of that. I am also a big fan of these sil-mats, which also work well with this recipe. However, you do need to be careful not to damage the sil-mat when cutting the crackers. If you are using a coffee mug to cut your crackers into circles, the sil-mat should be fine.

To make the vegan s’mores, these are the ingredients you will need: Dandies vegan marshmallows and Endangered Species Oat Milk and Dark Chocolate Bar. Enjoy! 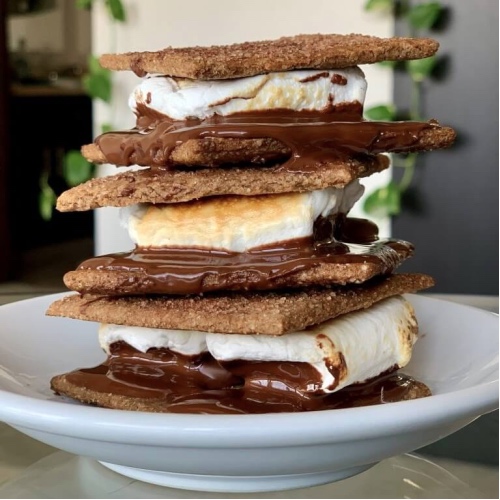 A ratio of one part cinnamon to four parts sugar is standard for an all-purpose cinnamon sugar blend. I mixed together one and a half teaspoons cinnamon and two tablespoons of sugar. It was a good amount to sprinkle on the crackers after brushing with melted Earth Balance. If you have coarse cane sugar you may want to pulse it in a small food processor before adding cinnamon.

You can also try making this vegan chocolate fudge with goji berries and roasted almonds recipe. The recipe features only a handful of ingredients, two of which are superfoods! These include cashews, cacao powder, maple syrup, vanilla extract, cacao butter, roasted almonds, and goji berries, of course.

For the peach lovers out there, this decadent vegan peach galette with puff pastry and raspberries will hit all the right spots. You can whip up this recipe up in under 40 minutes. The recipe features a delicious filling created with only four ingredients: peaches, coconut sugar, vanilla extract, and fresh raspberries.

This recipe was republished with permission from Plant Test Kitchen.

Vegan Casserole in a Skillet With Plant-Based Taco Meat

This Vegan Chicken Pad Thai Is So Easy to Make