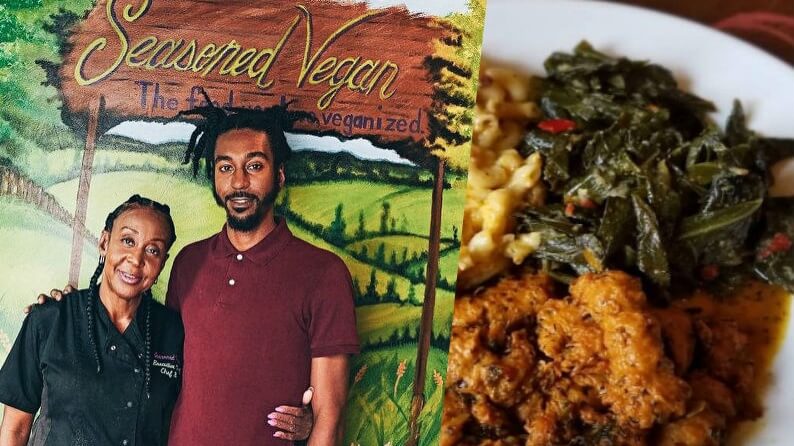 Brenda and Aaron Beener are the mother and son duo behind Seasoned Vegan, a plant-based soul food restaurant in Harlem.

Brenda — who also acts as Seasoned Vegan’s head chef — focuses on making traditional soul food dishes, just without the animal products. The idea is to show the community that healthy, plant-based living doesn’t have to come at the expense of flavor or the comfort of the dishes they know and love.

This element of love is extremely important to the pair, the slogan of the eatery is “the food you love, veganized.” Love is at the center of everything they do. In fact, Brenda doesn’t even let her restaurant staff cook if they’re not feeling it.

The chef told Vice, “[I’ve said to my cooks] if you don’t feel like cooking or you come in with an attitude, don’t go near my stove, because that vibration goes into the food.”

“If you’re going to step to my stove, step to my stove with love,” she continued. “I don’t need you stepping to my stove when you’re angry or upset, ’cause then my food is going to be no good.” Aaron added, “I feel like ‘food is love’ is the founding principle of Seasoned Vegan.”

It was out of love for his father that he and his mother decided to go vegan in the first place. His dad discovered healthy plant-based living in the 1990s, after a 21-day fast. The family had to adapt; Brenda was out of sorts at first, making “very bland” food out of vegan cookbooks.

After experimenting, she found she could just make vegan versions of the food she cooked before, and her family — and now the customers of Seasoned Vegan — are here for it. The Seasoned Vegan menu consists of a wide variety, including lemon “chicken” nuggets, soy BBQ Riblets, and “Crawfish” made with burdock root.

Whilst food is the most important ingredient at the restaurant, the duo also hopes that it will become a pillar of the community.