British supermarket chain Sainsbury’s has expanded its range of vegan food with the introduction of Plant Pioneers’ meat-free steaks and bacon.

The new Vegan Steaks and Smoky Vacon Rashers contain no cholesterol and are fortified with iron and vitamin B12. Sainsbury’s also welcomed plant-based shroomballs and vegan smoky bacon lardons, also made by Plant Pioneers.

The Rise of the Vegan Steak

More people are swapping out animal-based steak in favor of vegan varieties for their health, the planet, and animal welfare. Last year, Dutch company Vivera became the first to bring a vegan steak to market. The product launched in more than 400 Tesco stores in the UK and all 40,000 units of the first delivery sold out in just a few days.

Vivera’s Veggie Steak is made from soya and wheat protein and like Plant Pioneers’ product, it’s fortified with iron and B12. “The smell, taste, and bite can hardly be distinguished from real steak and we are convinced that this product will meet a large need of consumers,” Gert Jan Gombert, commercial director of Vivera, said in a statement. 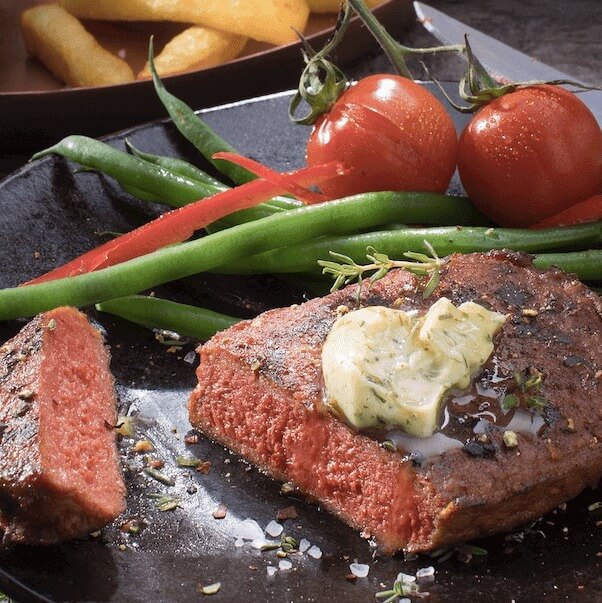 Vivera’ Veggie Steak sold out within just a few days of launching. | Vivera

Later in 2018, UK-based vegan supermarket chain GreenBay launched its own plant-based steak under its Harmless Foods brand. The vegan steak is gluten- and cholesterol-free and contains more than 15 grams of protein and 30 grams of fiber.

Others are keen to have a stake in the vegan food scene. Plant-based meat brands Impossible Foods and Beyond Meat both have plans to launch vegan steak in the future.

Plant Pioneers’ vegan bacon and steak are the latest plant-based products to join Sainsbury’s shelves but certainly not the first. The supermarket chain became the first in the UK to launch vegan BBQ ribs earlier this year.

Last year, the grocery chain launched 21 meat-free products and updated the recipes of four existing items to make them vegan. The move helped Sainsbury’s boost its sales of vegan products by 65 percent.