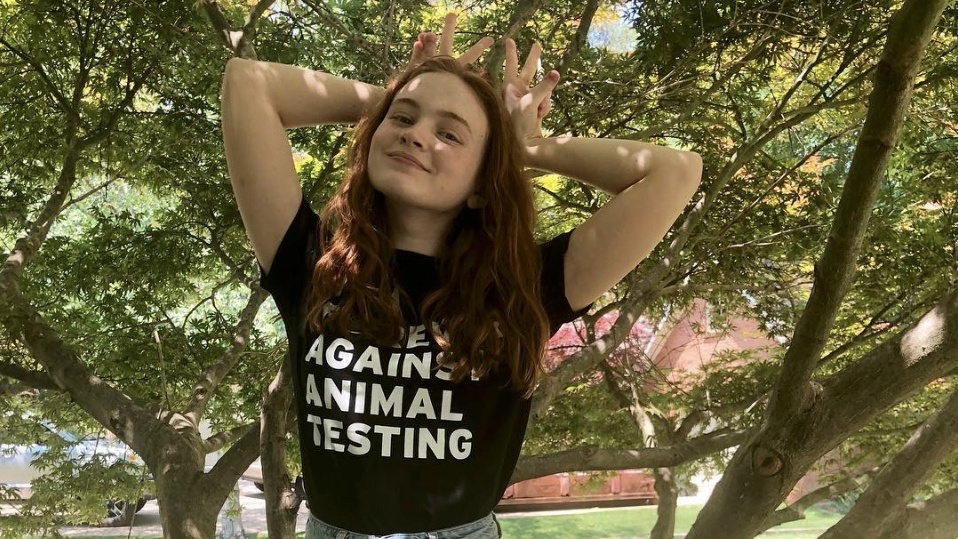 Vegan actress Sadie Sink will join the list of impressive plant-based activists and leaders at the US premiere of “Dominion,” a new animal rights documentary. The young star, known for role as Max in the hit Netflix thriller, “Stranger Things,” is also one of the film’s narrators, along with other vegan celebrities.

Kiko was #BornTo play, snuggle and give lots of kisses, not fight. Sunday was National Dogfighting Awareness Day, however we should be aware of the barbaric activity of dog fighting everyday. I’m helping @ASPCA raise awareness about this cruel practice. Visit ASPCA.org/BreakTheChain to take action and help end dogfighting for good! #BreakTheChain

The sixteen-year-old was introduced to the vegan lifestyle after working on “The Glass Castle” with Woody Harrelson, who is a longtime vegan. In an interview with Vegan Life, Sink explained, “I got really close to [Harrelson] and his family. I spent a lot of time with them. While I was with them I was eating vegan and I was kind of like watching them and seeing the way they ate and the way they lived their lives. I was really inspired, so I decided to try it and I did some research, mainly by watching documentaries, and then I realized that it was the right thing to do. It was a really good decision that I made and I’m very happy.” She continued, “The most important thing to me is that I’m helping the animals and the environment.”

Documentaries seem to be among the main entry points to the plant-based diet, as numerous celebrities and athletes have attributed their transition to a certain film. For example, “The Walking Dead” star Austin Amelio recently went vegan after watching “Cowspiracy,” and Forumla 1 World Champion Lewis Hamilton discovered veganism after watching “What the Health.” These informative films spark an interest and offer a new perspective on food, encouraging the audience to do their research. Once one becomes educated on the ethical, environmental, and health issues surrounding an animal-based diet, many find that they cannot continue to consume animal products.

The producers and celebrity narrators of “Dominion” hope this new film produces a similar effect. The documentary team has gathered a remarkable list of A-list vegan celebrities to take part in narrating the film. In addition to Sink, Kat Von D, Sia, Rooney Mara, and Joaquin Phoenix have all contributed their voices to advance the film’s storyline. There has been no word as to whether these stars will also attend the premiere.