Kenyan vegan small business owner and baking enthusiast, Katya Horwitz-Kanygina, has catapulted out of the farmers market and into major retailers with her Foods Free From brand. Her brownies and quick breads were the first to make the leap, but now, she has come up with a line of dairy and sugar-free ice cream that just hit the shelves of a major supermarket in Kenya.

Kanygina doesn’t have a website to promote her goods, but her Facebook page is kept up to date with her launch announcements, recipes, and baking tips. All of her goods focus on the “free-from” concept, meaning they are all free from eggs, dairy, gluten, and refined sugar. Her repertoire of cakes, brownies, and sweetbreads is impressive, but this looks like her first official foray into ice cream.

The five non-dairy flavors are now available in FoodPlus, a popular Kenyan grocer. Kanygina admitted in a Facebook post, “It’s been a loooong way to reach the shelves of supermarkets!” But judging by her gratitude, it was worth the wait. The soy-based vegan sugar-free ice creams include Strawberry; Double Chocolate; Avocado, Mint & Brownie; Tamarillo; and Peanuts Caramel & Chocolate. 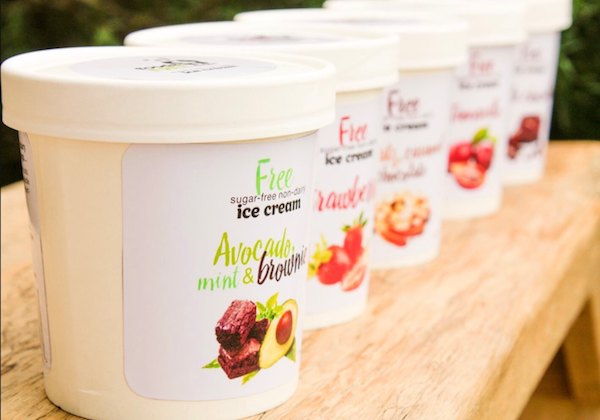 For those who do not live in the area, Kanygina uses her Foods Free From Facebook page as a baking blog. She regularly posts chocolatey, luxurious, made-from-scratch recipes such as vegan gluten-free brownies, white and dark chocolate raspberry tart, and even homemade dairy-free chocolate chips. She also posts tips for troubleshooting, such as “Why Cake Sometimes Doesn’t Work Out.”

Vegan products are popping up where one would least expect them. In Ottawa, Canada, an all-vegan bakeshop is cranking out whimsical creations like donut-topped freakshakes and narwhal-themed ice cream. In Ireland, a vegan carvery, Moodley Manor, is selling plant-based Irish meat products to crowds in Dublin. And in India, vegan meat company Vezlay is creating plant-based versions of traditional Indian meats. A global shift in plant-based dining is also supported by the latest initiative of vegan Saudi Prince Khaled Alwaleed, who recently partnered with celebrity Chef Matthew Kenney to create a global plant-based hospitality firm, Folia.