A new vegan supermarket has opened its doors in East London to accommodate the neighborhood’s booming vegan scene. The Plant Based Supermarket will join the area’s line up of vegan cocktail bars, weekly markets, restaurants, and regular plant-based pop-ups.

The store, though compact, is filled with a wide selection of coveted vegan products from both local purveyors and international brands. Customers can expect freezer shelves lined with vegan ice creams and refrigerated sections of vegan cheeses, along with fresh baked goods, a coffee counter, and popular brands of ready-made and frozen meals. The quaint market also has an outdoor seating area dotted with bright green chairs for shoppers to enjoy their ethical purchases. When the weather is poor, customers are encouraged to take advantage of the indoor seating (along with the complimentary wi-fi). 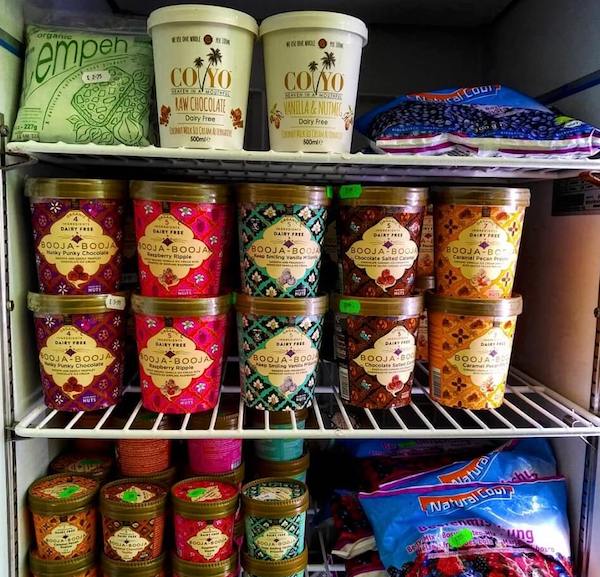 Once an extremely rare, if not inconceivable find, completely vegan supermarkets and independent grocers are gaining traction worldwide. In Seoul, South Korea, a store coined “Vegan Space,” opened its doors earlier this month, selling vegan versions of Korean staples such as kimchi, banchan, fermented drinks, and more. The store also focuses on sustainability by offering cruelty-free and environmentally-friendly toiletries and reusable takeaway bags. In North Carolina, UpBeet market opened in June, selling 100% “vegan and cruelty-free” items. Then there is Veganz, one of the originals. The Germany-based vegan market opened its first location in 2011 as the first plant-based food chain store in Europe.

Traditional big-box stores are also stocking their shelves with increasing amounts of vegan products. In the UK, supermarkets are expanding their “Free From” ranges and carrying more vegan ready-made meals. Tesco has quickly become associated with the popular Wicked Kitchen meals, whereas shoppers are also flocking to Waitrose to purchase the nutritious and hearty Happy Pear meals. In the States, Whole Foods has become a springboard for new vegan brands and products, carrying everything from the latest Beyond Meat item to vegan mac and cheese made by a local chef.

Though it’s comforting to find a plethora of vegan options at regular supermarkets, one thing is certain: there’s no mixing up dairy mac and cheese for the vegan version at the Plant Based Supermarket.