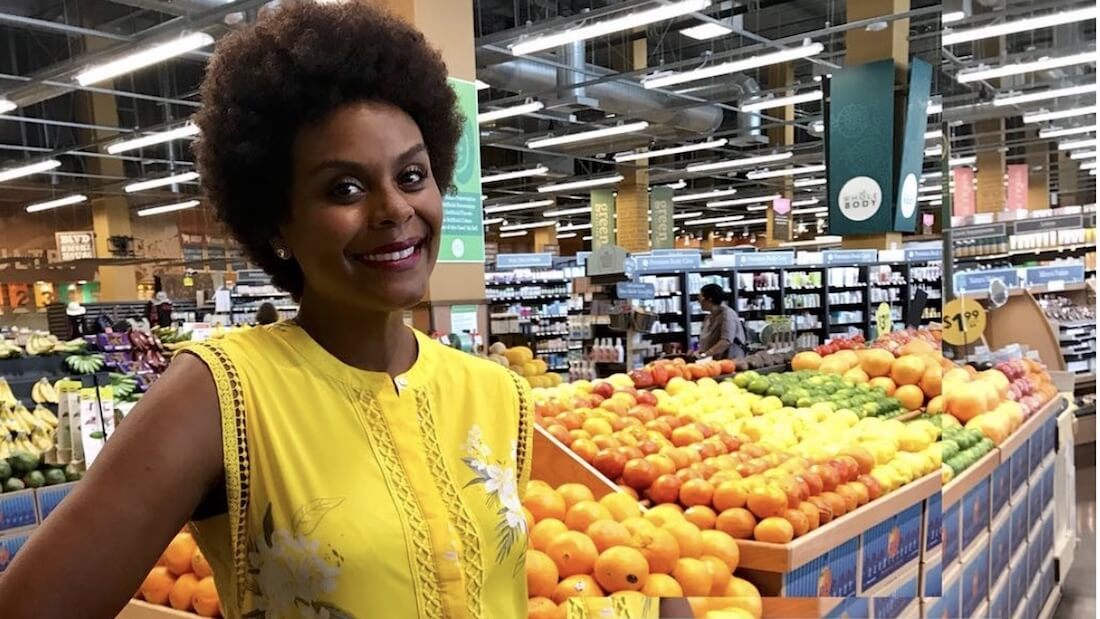 Vegan actress Tabitha Brown, who made her most recent claim to fame after popularizing the TTLA sandwich, is now an official Whole Foods Plant-Based Brand Ambassador. The celebrity stars in Whole Foods’ new Summer Grilling video series as part of her new role.

In the video, Brown walks the audience through Whole Foods Market, offering summer barbecue tips and picking up essential plant-based ingredients. As she strolls through the produce section, Brown jokes, “It’s like being in the Garden of Eden. Is that Adam and Eve over there? Hey Eve!” The star insists that she likes to start off a barbecue with a loaded romaine salad, then grill up a variety of veggies, because “everything tastes better on the grill.” She even suggests grilling up avocados and pineapple to impress guests.

After finishing up in the produce section, Brown made a beeline for the vegan meats. She picked up Field Roast sausages and burgers, along with Beyond Burgers and a package of Lightlife vegan Smart Bacon – for a vegan bacon cheeseburger, of course.

Shopping complete, Brown sat down to a hearty TTLA sandwich, exclaiming, “What a huge plant-based grocery haul. I’m going to have the best vegan barbecues this summer!”

Brown first connected with Whole Foods after posting a YouTube video about how much she loved the TTLA sandwich. “Honey, I’m looking around, and stuff looks different. That’s how good it is,” Brown claimed.  Officially called the Smoky TTLA, the deli counter creation consists of Lightlife tempeh bacon, tomato, lettuce, avocado, and garlic aioli, and it was only available in select Southwest and Southwest Pacific locations. The video went viral, and in January, Whole Foods expanded the sandwich offering to 150 additional stores, as well as 14 more in Canada.

This wasn’t Brown’s first appearance on the vegan video stage. She regularly posts food videos on YouTube, discussing the food she ate or filming quick cooking demos. In the most recent clip, she captioned, “I started off so strong today, but the Vegan Scone won!! Whole Foods Market why are those scones so good??? Move them to the back of the store for me, please. Y’all pray for my moderation spirit!” Brown may spend plenty of time in the Whole Foods produce section, but she knows life is all about balance, which includes vegan scones.