COVID-19 has altered how we socialize and unfortunately, this means that the holiday season might be lonely for a lot of us this year. That being said, if you’re dining solo or with a small group this season, juggling the roast, the sides (arguably the best part of Thanksgiving dinner), and dessert (the second-best part) might feel like a lot. Thankfully, there are a handful of places where you can order vegan Thanksgiving dinner for delivery or pickup.

Pro-tip: this isn’t an all-encompassing list. Check in with your local restaurants and small brands to see if they’re offering a plant-based Thanksgiving dinner. Local businesses will appreciate the support! Hopefully, despite the physical distance, we’re also able to coordinate video check-ins over dinner with friends, family, and chosen family members.

The Vegan Meal for 2 is priced at $39.99 and can be pre-ordered through the Whole Foods website for pickup the week of Thanksgiving. If you’re serving a bigger group, you can also add on sides like spinach and artichoke puffs, cider-roasted Brussels sprouts, and vegan pumpkin pie.

If you prefer to cook for yourself, vegan meal delivery brand Purple Carrot will ship the ingredients and recipes for an entire meat-free Thanksgiving meal for four right to your door. Hooray for skipping those long grocery store lines in the days leading up to the holiday. The meal features a Hasselback butternut squash with cider glaze, ciabatta stuffing with root vegetables and plant-based sausage, miso butter-roasted Brussels sprouts, and a pear cranberry crisp. It also includes the necessary trimmings: cranberry sauce and gravy. The meal is easy to prepare and comes with a recipe pamphlet that you can hold onto after dinner is done.

Orders must be placed no later than 11 pm on Tuesday, November 11. Check it out here. 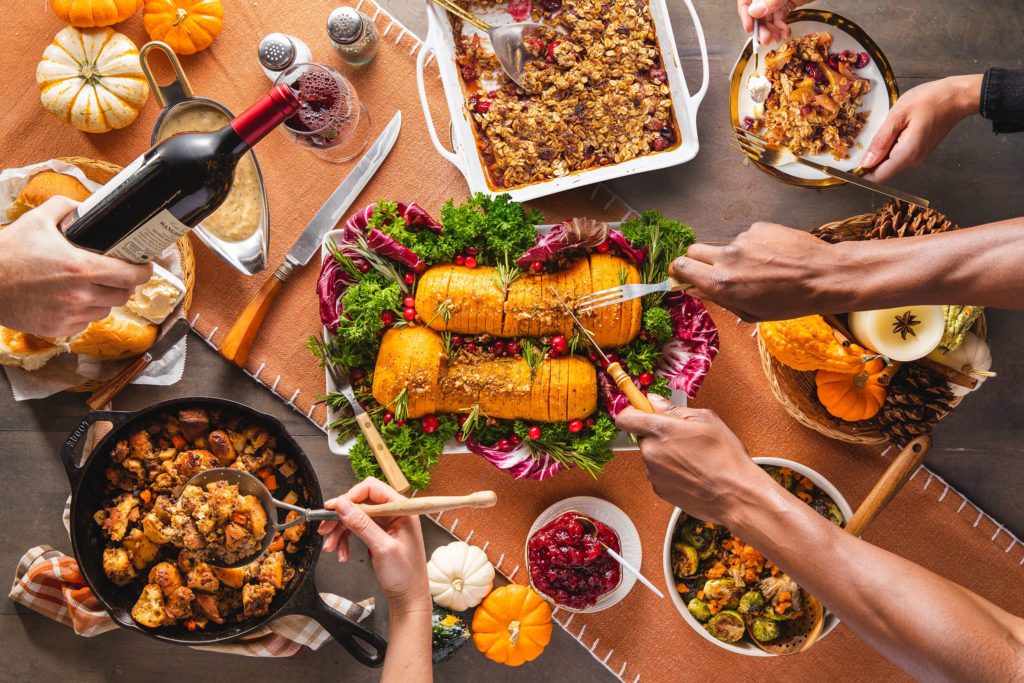 Purple Carrot will ship you all the ingredients for a vegan Thanksgiving dinner. | Purple Carrot

Based out of Minneapolis, Herbivorous Butcher is a maker of small-batch vegan meats and cheeses run by brother-sister duo, Aubry and Kale Walch.

If you have a big household, its Turkey-Free Feast is for you. This meal-for-eight features a stuffed seitan turkey, maple sage breakfast sausage, seitan bacon, camembert sauce, herb cheddar, and gravy. It also has an a la carte menu, which includes vegan ham, turkey roast, cold cuts, sausages, and more. Check it out here. 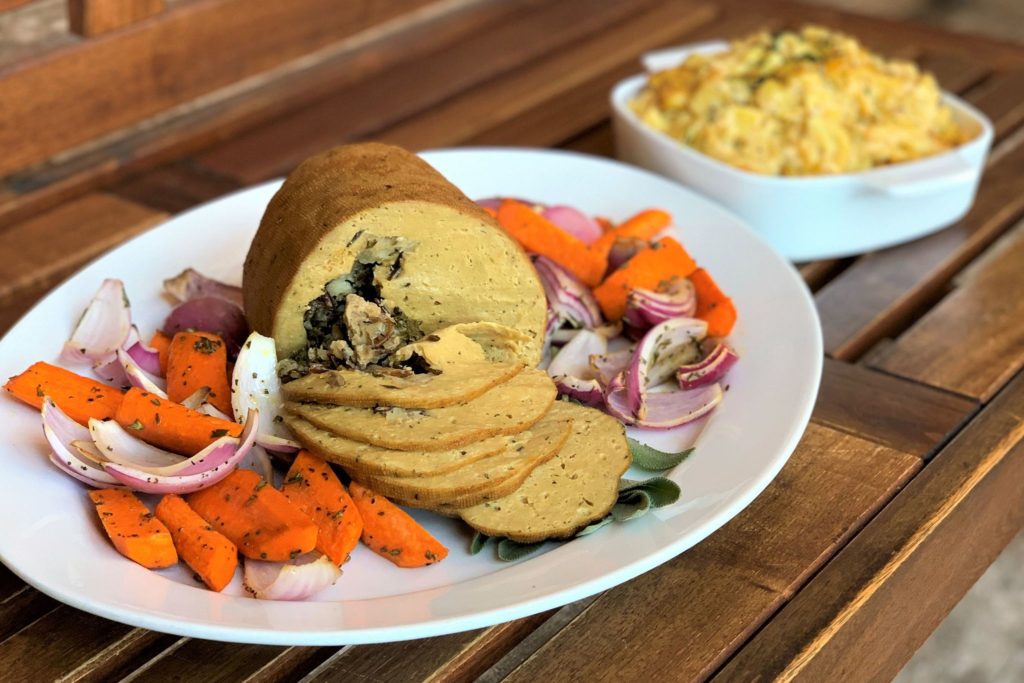 If you live near one of Veggie Grill’s 33 locations, then you’re in luck. The fast-food chain has a ready-made vegan Thanksgiving dinner available for pickup. The dinner for four features individual vegan turkey and mushroom pot pies, mashed Yukon Gold potatoes and gravy, glazed rainbow carrots, and baby spinach salad with cranberries, candied pecans, balsamic onions, and feta cheese. 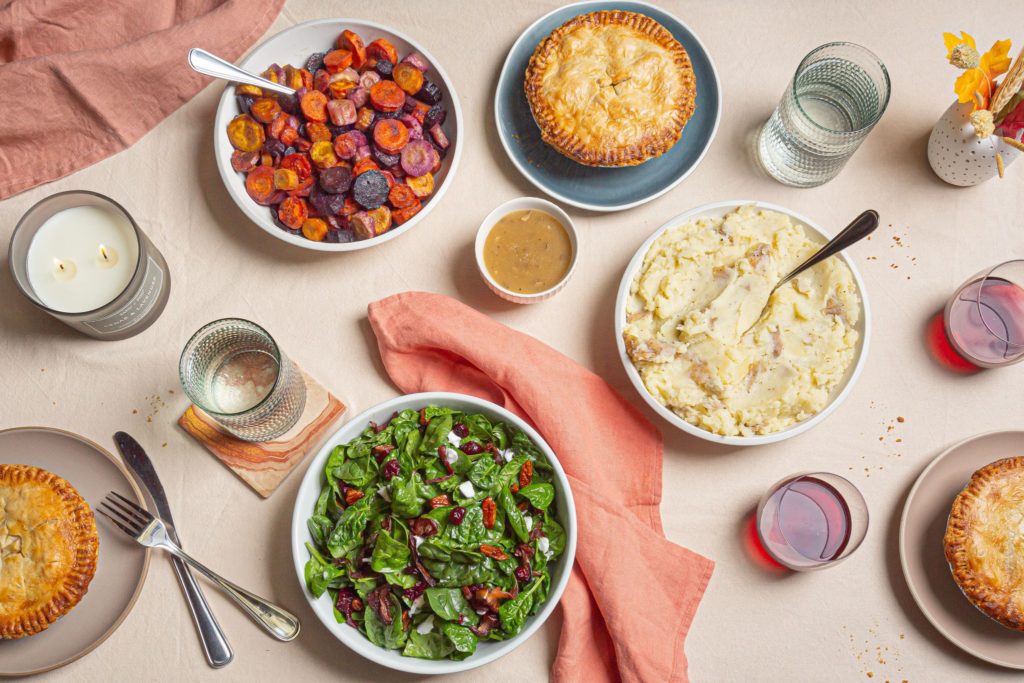 Also founded by a brother-sister duo, The Butcher’s Son opened up shop in Berkeley, California, in 2016. Drawing inspiration from their father’s diner that they worked at in their teens, co-founders Peter Fikaris and Christina Stobing specialize in American-style comfort food like burgers, BBQ pulled pork, bacon mac, and holiday dinners.

The brand’s vegan Thanksgiving feast, which feeds a family of four to six, comes with a crispy-skinned turkey roast, sausage stuffing, chicken pot pie, cheesecake, and a quart of eggnog. Everything can also be ordered a la carte. Preorders haven’t gone live yet, but check out the holiday menu here.

Planning on cooking at home? We have you covered there, too. Check out our vegan Thanksgiving guide, plus these recipes for the best side dishes and desserts.