After about a week of rumors swirling around the internet, the Tie-Dye Frappuccino has arrived at Starbucks. It’s colorful, it’s vegan-friendly, it will take your barista maybe about 10 steps to make it, and it takes like banana Laffy Taffy.

Is the Tie-Dye Frappuccino Vegan?

The Tie-Dye Frappuccino is the newest member of the limited-edition family of colorful frappes at Starbucks, joining last year’s bright pink Unicorn and Halloween’s Witch’s Brew drinks. To make the summery new drink vegan, you need only ask your barista to make it with dairy-free milk and leave off the whipped cream. It launched yesterday and is available for four more days or as long as “supplies” last. 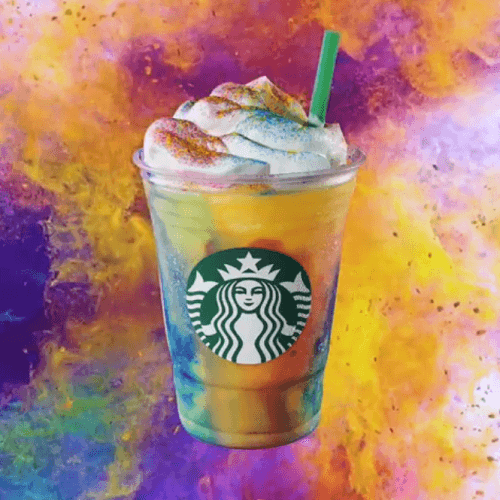 Starbucks’ new Tie-Dye frappe can be made vegan

As reported by Business Insider, Starbucks employees had mixed feelings about the psychedelic frozen concoction in the days leading up to the launch. Like other Instagram-friendly frappes that came before it, the Tie-Dye Frappuccino takes several steps to make, as the employees have to layer different powders to achieve a colorful effect. Frozen drinks generally take longer to make than other drinks. Employees are bracing for the day-one launch.

“It looks like it’s going to be the Unicorn Frappuccino all over again, which the company said they wouldn’t do again because of partner feedback,” a Starbucks employee told Business Insider. “They don’t give a [expletive] about us and it’s obvious.”

Employees are also taking to Twitter to vent their frustrations and are joined by a few empathetic supporters. “Does the tie dye frappuccino look cool? Yes. Will I be ordering it? No. You know why? I’m not gonna make someone make that,” one Twitter user wrote. “Be kind to your barista please. If you do order it please at least tip well because from what they’ve said it’s awful to make.”

Starbucks lines are likely to be longer than usual on the first day of the Tie-Dye Frappuccino-alypse. But if you’re feeling brave, the world’s largest coffee chain has other summery vegan drinks to choose from. A vegan ice latte, made with almond, soy, or coconut milk is a good go-to and you can sweeten it with vanilla, hazelnut, or caramel syrup. There are also options like iced coffee, cold brews, pink drinks (an acai refresher with coconut milk), and most other Frappuccinos — just ask for nondairy milk.