Spain-based vegan company Besos de Oro, that produces alternatives to Baileys liqueur, is set to make its UK market debut within the next year. Compared to Baileys Almande, a vegan version of Baileys Irish Cream that’s made with almond milk instead of cow’s milk, the Besos de Oro flavors are also nut-free because they are made with tigernuts, a starchy and chewy root vegetable.

As reported by The Northern Echo, the brand expects to introduce two creamy vegan liqueurs to supermarkets in the United Kingdom and is also working on finding distributors in the United States and Berlin. The first product, called Besos de Oro (literally translated, “golden kisses”), is a dairy-free cream liqueur made from tigernut milk and brandy. The company will also introduce Besos de Chocolat — a decadent, chocolate vegan cream liqueur.

Besos de Oro was founded five years ago by Durham County native Peter Smith, who created the creamy, alcoholic beverage by complete accident while on vacation in Spain with his wife Penelope. After experiencing two heart attacks, doctors advised Penelope to consume no more than one alcoholic drink per day. One day, when Penelope asked for brandy, Smith came up with the idea of making the drink last longer by combining it with horchata concentrate, a popular, milk-like Spanish beverage made from tigernuts, water, and sugar. “It looked and tasted like Baileys, only better. It was phenomenal,” said Smith. 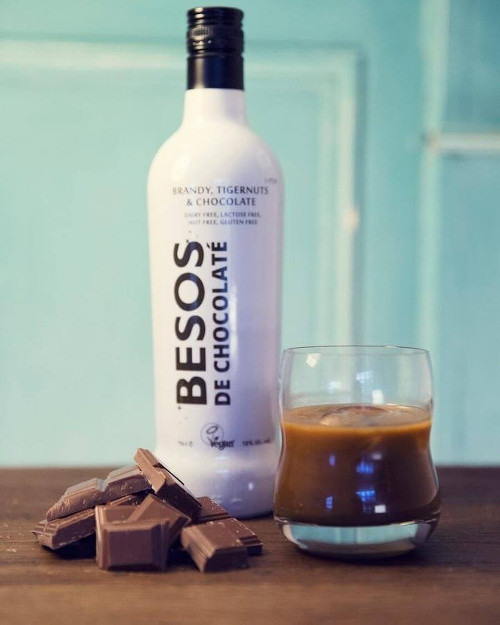 “I’d accidentally come up with a vegan and lactose-free version of Baileys liqueur,” Smith continued. “But while Baileys is full of sugar, which masks the alcohol, ours is not so sweet and you can really taste and enjoy the lovely, smoky Spanish brandy. It’s got a kick; it is now our star.”

According to Smith, the company is close to signing an exclusive deal with Sainsbury’s, which would see the supermarket chain carrying both the classic and chocolate version of the drink. However, Smith says that he is also considering other major UK-based grocery stores that may want to carry Besos de Oro, which would bring in “£5 million worth of business at the very least on liqueur sales alone.”