The Tiny Chef Show features titular host “The Chef” as he produces miniature plant-based meals for his miniature friends. Since launching to Instagram in 2018, The Chef has gained more than 600,000 followers.

The miniature cooking program features stop-motion models, puppets, and intricate small-scale sets. It was created by animator and writer Rachel Larsen—”Coraline” (2009), “ParaNorman” (2012), and “Isle of Dogs” (2018)—along with Adam Reid and cinematographer Ozlem Akturk.

The show aims to educate children on the benefits of plant-based food and support them in learning to cook. According to the show’s lore, The Chef has been cooking vegan food for more than 30 years. He has also worked with many celebrities but prefers not to brag.

“The Tiny Chef stole my heart when he taught me how to make a tiny apron, and I know he will take everyone’s hearts like he took mine,” said Ramsey Naito, Executive Vice President, Nickelodeon Animation Production and Development. “Brian Robbins and I want to thank everyone at Imagine Kids+Family as we welcome The Chef to Nickelodeon.”

“The Chef and his team have created a vibrant, inclusive, and community-based world,” said Grazer and Howard in a joint statement. “We at Imagine are thrilled to share it with audiences, big and small.”

Imagine Kids+Family President Stephanie Sperber and Morgan Sackett will also produce the program. While vegan actor Kristen Bell—”Forgetting Sarah Marshall” (2008), “Frozen” (2013), “Veronica Mars” (2004-2007, 2019)—who is a huge fan of Tiny Chef, also serves as an executive producer alongside its creators. 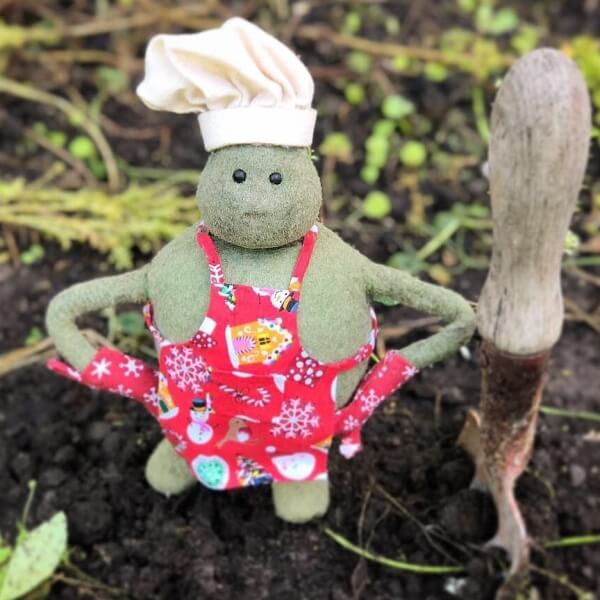 The Chef is just 6.5 inches tall. | The Tiny Chef/Instagram

The Tiny Chef and Vegan Recipes

The Tiny Chef website also breaks down popular vegan recipes, or “weshipees,” including vegan banana bread and English muffins. Previously, The Chef has made a miniature Beyond Burger, vegan banoffee pie, papaya salad, and snacks such as pretzels and chocolate chip cookies.

“It’s been The Tiny Chef’s dream to have his own cooking show and now Nickelodeon is making that come true. This next chapter in The Chef’s journey will be so exciting and thrilling for all of us,” said the show’s creators.

“We cannot wait to tell The Tiny Chef this amazing news,” they added. “Though we’re a little worried his tiny heart may burst with joy so we’ll make sure he’s sitting down.”