“We’re thrilled to be able to bring Ahimi, our plant-based alternative to raw tuna, to more consumers across the United States,” said David Benzaquen, Co-Founder and CEO of Ocean Hugger Foods in a press release. “Ahimi provides consumers the natural, meaty texture of raw tuna without harming our oceans.”

“We know our shoppers come to Whole Foods Market to try new, innovative and trend-forward products, and Ahimi delivers on all three as the original plant-based alternative to raw tuna,” said Andy Sasser, global category manager at Whole Foods Market.“We’re thrilled to expand our partnership with Ocean Hugger Foods to bring Ahimi to more than 20 additional in-store sushi counters this spring.” 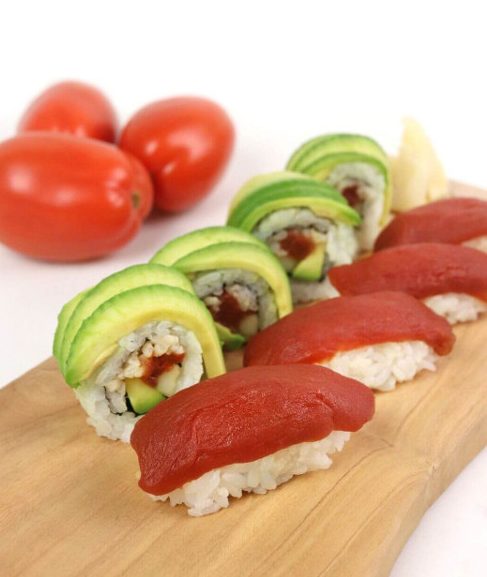 Since its launch, Ahimi tuna has gone on to receive the “Outstanding Innovation” award from Whole Foods Market. The award is reserved for Whole Foods supplies that demonstrate not only innovation but also a commitment to environmentally sustainable practices.

According to an analysis by the United States Food and Agriculture Organization, 90 percent of the world’s fish stocks are either fully exploited, overexploited, or depleted. Due to that, Ocean Hugger Foods’ is driven by its mission to create sustainable seafood made from plants.

Recently, Ocean Hugger Foods partnered with food distributor Aramark in order to increase plant-based food options at schools and corporate cafes. Plant-based poke bowls made using the vegan tuna are currently in the works for Aramark locations and the company plans on launching a carrot-based salmon alternative and eggplant-based eel alternative in late 2018.

A complete list of Whole Foods Market locations that now carry Ahimi can be found on Ocean Hugger Foods’ website.