The holiday season is upon us, but for turkeys, that doesn’t necessarily mean sweetness and joy. Every year, millions of turkeys are eaten around the world. In the U.S. alone, an estimated 46 million are slaughtered in the run-up to Thanksgiving. In the UK, around 14 million turkeys are killed for Christmas dinners. But it doesn’t have to be this way, there are plenty of pre-made vegan turkey roasts or recipes to fill your plate with this festive season.

Although many companies like to paint the perfect picture of turkeys living a free-range, happy existence before they are killed, this is not always the case. In fact, it’s rarely the case. Most turkeys live in cramped, industrial conditions on factory farms. In the wild, they can live up to the age of ten, but turkeys that end up as Christmas dinner are often only born in the previous September.

Turkeys are bred to be abnormally large — a male can reach 25 kilograms, says the Independent, but their natural weight is around 7.5 kilograms. They can’t cope with this amount of weight, meaning many suffer from broken legs. At the end of their lives, many have their throats cut. Others are slaughtered or gassed.

When they are allowed to live out their natural lives, turkeys have proven themselves to be kind, charming animals. Jess Due works for Farm Sanctuary, an animal rescue organization. She told LIVEKINDLY about one particular turkey called Sandy. “When I met Sandy, she had been really been mistreated by humans,” said Due. “She climbed into my lap despite all of those things. That takes a lot of courage to be mistreated and open yourself up to love.”

What Is Vegan Turkey?

If you don’t want to eat another turkey like Hilda, there are plenty of vegan turkey options on the market. You can buy it from a supermarket, a vegan butcher, or you could even make your own, using ingredients like seitan or tofu. if you opt for a meat-free turkey, you don’t have to stray from tradition, you can drizzle gravy over it and serve with all the veggie sides you usually would. It’s just cruelty-free.

Vegan turkey can have a similar texture and taste to the traditional turkey, although it depends on what brand you choose or which ingredients you choose to make it with. If you make your roast with tofu, it’s unlikely it’s going to taste exactly like turkey (doesn’t mean it won’t taste good though). Seitan is the most turkey-like vegan meat. It’s used in a number of plant-based recipes to emulate the real thing. It has a similar look and texture, and if cooked and seasoned right, it can taste pretty similar too.

As aforementioned, seitan — made from wheat gluten — is one of the most popular ingredients to make vegan turkey. However, tofu is another popular choice. You could also use textured soybean protein. To get the right flavor, it’s all about the seasoning. Consider adding garlic, pepper, onion powder, and a variety of herbs, including thyme and parsley.

There are a number of vegan brands offering plant-based turkey feasts — but the most well-known is arguably Tofurky. It’s even served in a restaurant on the Sims 4. Celebrity fans include Tyler Perry and Miley Cyrus; after Thanksgiving last year, Cyrus posted a picture on Instagram of her “Tofurky” baby.

Founded 35 years ago, Tofurky makes a variety of roasts — including a Ham Roast with Glaze and an Everyday Ham Roast. Its most popular is its plain turkey-like roast, made with a blend of wheat and tofu.  You can opt for a few different versions of the roast, including one stuffed with wild rice, and one served with traditional gravy.

Gardein offers two turkey-like roasts: Savory Stuffed Turk’y — made from soy protein and wheat gluten — and a Holiday Roast. If you don’t fancy a full roast, the brand also offers Meatless Turk’y Cutlets, which are “crispy on the outside and tender on the inside” and perfect with gravy, says the brand.

According to The Spruce Eats, this tofu-based vegan turkey is simple to make, although it involves quite a few different steps. Add vegetarian stuffing and herbs like sage, thyme, and rosemary for that traditional Thanksgiving taste.

This vegan turkey roast by the Edgy Veg calls for a range of ingredients, including seitan, chickpea flour, and nutritional yeast.

Vegan turkey and gravy sandwiches are arguably the best part of Boxing Day. For a really indulgent lunch, serve the turkey on toasted crusty bread with rich gravy poured over the top.

According to Gaz Oakley — the founder of Avant Garde Vegan — this Stuffed “No Turkey” recipe is technical to make, but you’ll be glad you did. You can even wrap it even homemade bacon. Oakley says, “I believe this recipe is powerful enough to help reduce the amount of people having meat on their dinner tables at Christmas.”

Place this Vegan Turkey Roll in the center of your holiday table for a tasty, eye-catching main. If you want to spend time with your family when the day comes, you can always make it in advance and freeze.

According to Brand New Vegan, this recipe is like “Thanksgiving on a sandwich.” The recipe creator says, “Seasoned Soy Curls replace the turkey, just toss in the freshly chopped veggies and some dried cranberries, and then tie it all together with a creamy, white bean mayo and you got a sandwich to make any holiday proud.” 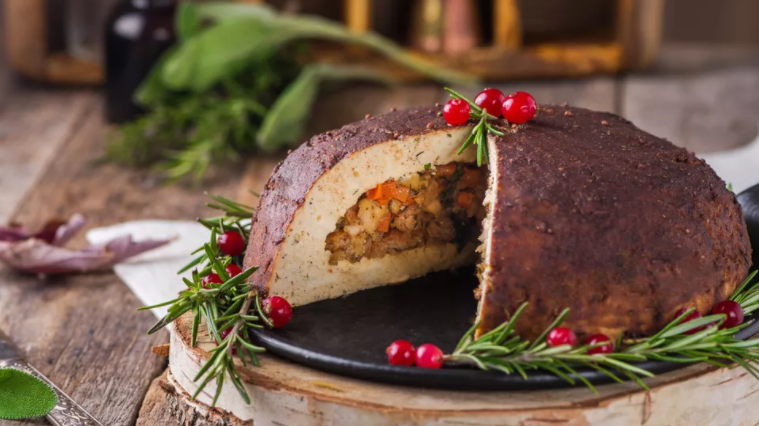 Article Name
The Best Vegan Turkey Roasts and Recipes for Thanksgiving
Description
Instead of traditional Turkey this Thanksgiving, try your hand at one of these vegan turkey roast recipes and serve your guests a cruelty-free feast.
Author
Charlotte Pointing
Publisher Name
LIVEKINDLY
Publisher Logo