LIVEKINDLY
Home Food & Health You Can Now Buy a Turkey-Shaped Vegan Feast for $60 at Whole... 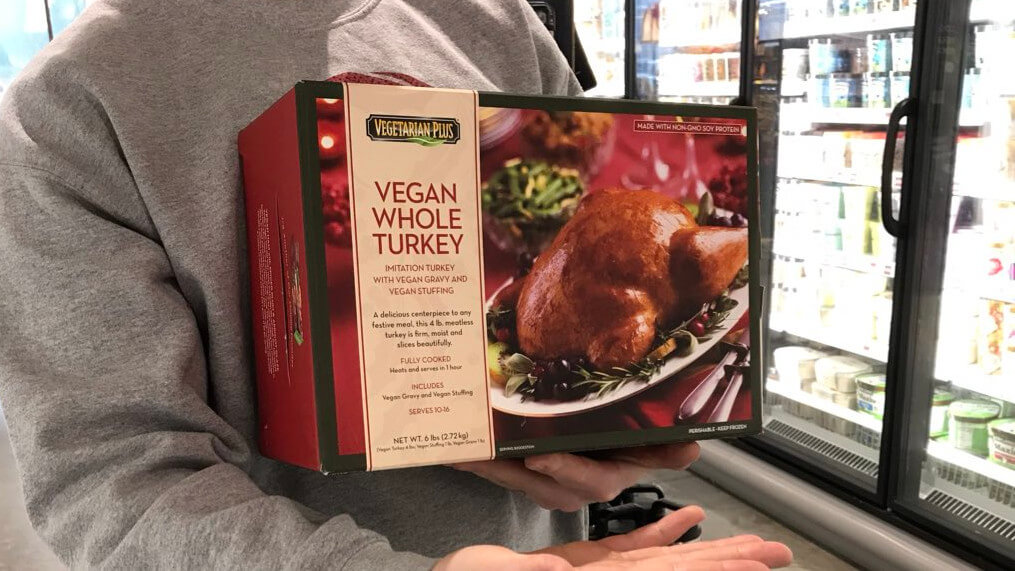 PSA for anyone still planning their holiday dinner – you can get a vegan turkey feast for $60 at Whole Foods. It features a six-pound whole vegan turkey that’s actually shaped like a turkey, and it comes served with herbed stuffing and mushroom gravy.

The meatless bird is nothing new – it’s made by California-based food company Vegetarian Plus, which has been making vegan meat for more than 15 years. But it’s back in stores for the holiday season. According to the website, the whole vegan turkey is made from non-GMO soy protein and wheat protein and even featured a glazed “skin” made from tofu. Not only is it a more compassionate, healthier option compared to the real thing, it also cooks a lot faster, requiring just one hour in the oven as opposed to a whole day cooking a bird of the same size.

Vegetarian Plus created the turkey in order to provide a meatless entree that looks and tastes like a traditional holiday dinner. “A pleasing presentation is a big part of holiday celebrations, and our ‘bird’ has a beautiful table appearance, as well as a delicately subtle flavor and texture so close to real turkey, you’ll look twice to make sure it’s really vegan,” the company wrote.

We went to Whole Foods to pick up some oat milk and left with $60 vegan TURKEY that actually looks like a REAL LIFE TURKEY. pic.twitter.com/huLEYtfSw5

The Vegetarian Plus whole vegan turkey isn’t the only plant-based holiday entree on the market. Tofurky’s iconic holiday roast is available in most grocery stores. The tofu and wheat protein-based feast has a savory brown rice stuffing and comes served with vegan gravy. New to this year, you can even buy a vegan Tofurky feast that comes with a dairy-free chocolate cheesecake. Tofurky also makes a vegan ham-style roast with an amber ale glaze.