The vegan vending machine will work like a traditional machine. “You open the door by using your bank card or telephone which is in use as a bank card. Then you select your products, as soon as you close the door, the transaction is confirmed and the payment is done,” Nikki Kramers of Vegan Masters told LIVEKINDLY.

Although the new concept was already in production, Kramers says she expects the current pandemic will increase the demand for similar “COVID-proof” products.

“There was already a growing demand for smart solutions for to-go concepts before COVID-19. But now we expect a massive demand for fresh vending solutions. We expect that non-contact food concepts will be the future,” she said.

Vegan Masters was founded in order to help “veganize” the world. “We see the effects of our consumption on our environment and our climate on a daily basis around us and in the news. And with a still-growing world population … eating meat and other animal products is simply no longer sustainable,” the company’s website reads. 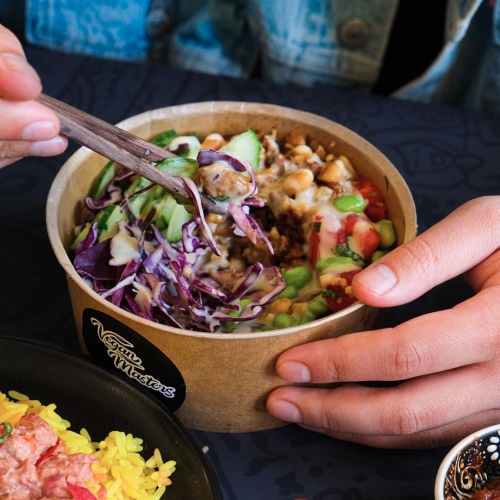 Rise Of Veganism In The Netherlands

According to data released last year from market research firm IRI Nederland, the number of plant-based products in Dutch grocery stores has increased by 51 percent since 2017.

As plant-based meat surges in popularity, animal-based meat sales are on the decline. The data also revealed the sales of pork, beef, and game meat decreased by nine percent over the same period. Chicken sales had previously seen a two percent increase. However, they dropped by 0.4 percent in the first half of 2019.

Due to the increased demand for plant-based products, the Netherlands’ largest grocery outlets—Albert Heijn and Jumbo—have steadily been increasing their vegan and vegetarian ranges. Since 2016, the former has increased its meatless products by 33 percent.

In 2018, Albert Heijn added a dedicated, vegan refrigerated display case in one of its busiest locations in Amsterdam. The case contains ready-made meals from Uit de Keuken Van Maass.