By Sunny Gandara
Jump to recipe

Krumkaker – cone shaped, waffle-like cookies with a pretty pattern – are very classic and popular in Norwegian cuisine, particularly around Christmas time. I would venture to say they’re the most well known and made pastry besides lefse, and a true symbol of the holidays.

Recipes for krumkaker can be found in the oldest Nordic cookbooks dating all the way back to 1648, and the first Norwegian cookbooks all had different versions. Norway’s first printed cookbook by Maren Elisabeth Bangs included recipes for both thick, thin, and regular krumkaker. The biggest repertoire of krumkake recipes can be found by Henriette Rude and Hanna Winsnes who respectively offer six and seven recipes each. It’s important to note that “krumkaker” was a common denominator for a wide selection of cookies that could be rolled into a cone and not only the kind we think of as krumkaker today.

As with many other cookies, the ingredients in krumkaker are classically flour, eggs, sugar, and butter and they are often spiced with cardamom. Because the recipe also calls for potato starch, there is no need to add eggs in the batter, as the potato starch will act as a nice binder. Regardless, I’ve chosen to add a little aquafaba, which works beautifully.

Krumkaker are typically filled with cloudberry cream and while I often have cloudberry jam in the house, I think nothing really replaces fresh cloudberries that I’ve picked myself from the secret spot by our cabin in the mountains in Norway.

So instead, I chose to fill my krumkaker this time with trollkrem (“Troll Cream”), but instead of lingonberries I chose wild berries, a mix of blackberries, blueberries, strawberries, and raspberries. Wild berries grow everywhere in Norway. In fact there are more than 40 different types of berries growing in Norway and Sweden and it’s very common to go out and forage for them. I’ve often said in previous blog posts that it is in Scandinavia you find the tastiest, juiciest, and freshest berries so I consider these one of the most authentic ingredients in Nordic cooking.

Trollkrem is a super simple dessert made with only three ingredients: egg whites, lingonberries, and sugar, and it is often served on New Year’s Eve. To replace the egg whites, I’ve used aquafaba which works like a charm. Simply start by whipping up the aquafaba with a little cream of tartar, then slowly add in the sugar.  It is important to use a stand-mixer on high speed and to be sure to whip the aquafaba for about 10 minutes, but no longer than 12 minutes. When looking into why this dessert is called trollkrem, there isn’t a definite explanation. One is that the names stems from one of the ingredients: tyttebær, Norway’s name for lingonberries. According to Norwegian etymology, trollbær was a common name for a variety of wild berries. Another theory is that trolls live in the mountains, where most berries also grow, and a third is that there is something magical or “troll like” when the tart lingonberries get mixed with the sugar and egg whites (in my case, aquafaba) and transforms into the tastiest dessert… So there you have it – pick the story you like best!

If you don’t feel like making trollkrem, you can fill the krumkaker with vegan ice cream or any other type of whipped cream made from either coconut cream or aquafaba and even drizzle it with a little melted chocolate… Use your creativity – no filling will taste bad in these delicious cardamom cone cookies!

These Vegan Waffle Cookies Are Stuffed With Dairy-Free Ice Cream 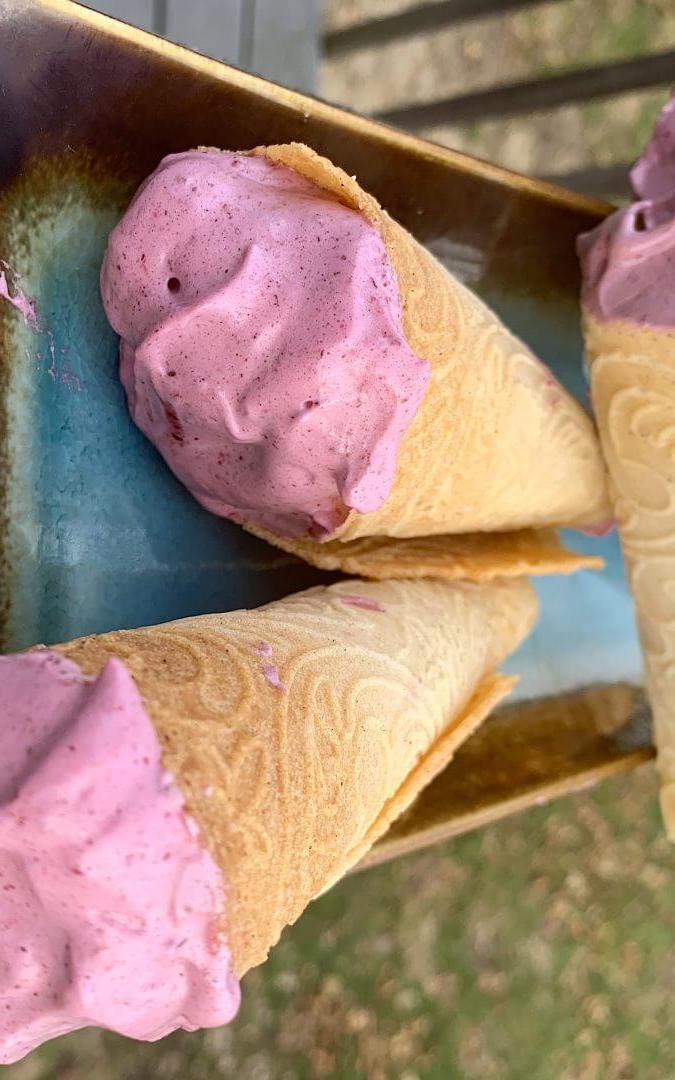 Cookies will keep for several days in an airtight container. Use the whipped aquafaba the same day – it won’t keep its shape overnight, and is best enjoyed the same day.