Every year when June rolls around, we celebrate Pride. Cities across the globe hold marches celebrating the pride in living your truth in the face of adversity and most importantly, remembering our history.

This year is extra special: it marks the 50-year anniversary of the Stonewall riots. Once a straight nightclub, the Mafia purchased Stonewall Inn, located in NYC’s Greenwich Village, in 1966 and turned it into a gay bar. The venue lacked a liquor license and police would regularly show up for cash payoffs, historian Martin Duberman wrote in the 1994 book “Stonewall.”

Police raids targeting openly queer individuals were common. The Civil Rights Act of 1968 excluded discrimination on the basis of sexual orientation and gender identity. During raids, the club lights would be turned on and everyone present in the bar would be lined up to show their IDs. Drag queens, trans women and men, and women wearing masculine clothing were arrested for not wearing clothing that matched the gender on their ID. Forcing gender non-conforming patrons into the bathroom so female officers could verify their sex was another common practice and patrons reported being touched inappropriately by male police during frisks.

In the early hours of June 28, 1969 at the historic Stonewall Inn — that stands to this day — members of the LGBTQ+ community fought back against the ongoing police raids. Patrons refused to present IDs and police announced they were closing the venue down. As cops waited for wagons that would take all of the bar’s liquor, more than 100 members of the LGBTQ+ community who found solace in the bar gathered outside. When a lesbian woman was handcuffed, beaten with a police baton, and shoved into the back of a truck, the crowd fought back — bottles were thrown, windows were broken, and trash was lit on fire.

It’s widely agreed that the Stonewall riots sparked the modern Pride movement. Exactly one year later, the first marches occurred in NYC, LA, and Chicago. But despite marriage equality and adoption being legal, there are still many hurdles faced by LGBTQ+ individuals.

As much as Pride is a celebration of openly being yourself and the chance to deck yourself out with all the rainbow things (or whichever flag represents you best!), it is also a time to remember why we still need it. Many of us have recognized the parallels between the historic oppression of LGBTQ+ people and the use of animals as commodities — check out this list of queer vegan activists. Here are seven ways to celebrate Pride while also giving back to the community — no rainbow-washing allowed. 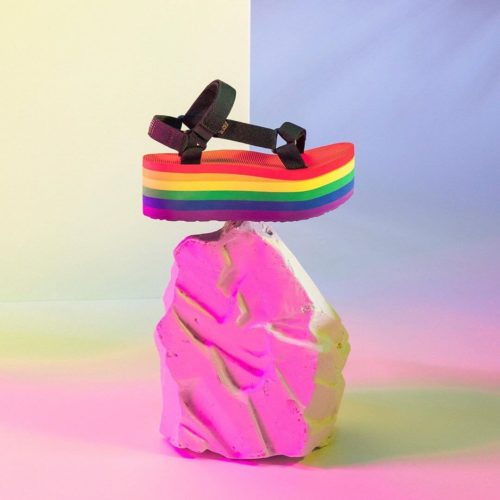 Flatforms are back with a vengeance this season and we’re not complaining. Arizona-based shoe brand Teva is kicking off Pride 2019 with a rainbow version of its vegan Flatform Universal style. Made in collaboration with musicians Tegan and Sara, $15 from every pair of shoes sold goes to the sisters’ eponymous foundation.

The Tegan and Sara Foundation fights for health, economic justice, and representation for LBGTQ+ women. According to the website, queer women experience higher rates of depression, suicide, drug abuse, and gynecological cancer. A quarter of lesbian women live in poverty, a number that climbs higher for queer women of color. One in five trans women have experienced homelessness. Media representation still leaves much to be desired; less than 1 percent of TV characters are lesbians while more than 25 queer women characters were killed in 2016. 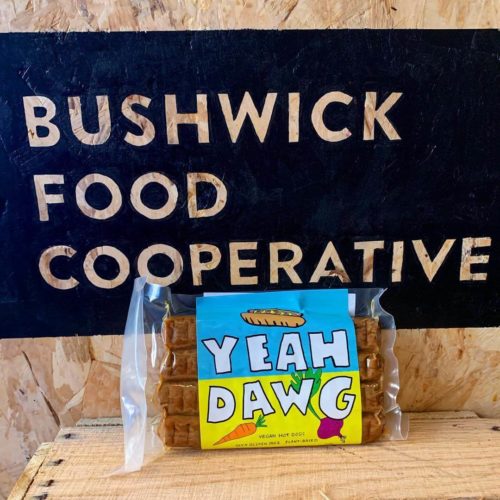 Buying from queer-owned brands is a great way to support the LGBTQ+ community and your local vegan scene. Some of our favorite NY brands include the vegan, gluten-free hot dog brand Yeah Dawg! and Lagusta’s Luscious, a Hudson Valley-based vegan and fair trade chocolatier. The latter launched a seasonal Pride Bark for June and 20 percent of proceeds go to the Newburgh LGBTQ Center.

Looking for more ways to support the animals? Donate to a sanctuary! VINE Sanctuary is a Vermont-based haven for abandoned farm animals which was founded in 2000 by eco-feminist scholar pattrice jones and her partner, Miriam. Jones’ writing explores the connection between how animals are treated and LGBTQ+ oppression, an approach that carries over to the sanctuary’s teachings.

“In 2002, the sanctuary was featured in an episode of the PBS series In the Life. Preparing for that show forced us to think through our ideas about the linkages between speciesism and anti-LGBTQ bias,” says the website. “Later that year, a couple of pair-bonded male ducks moved into the sanctuary, provoking further reflection. Since then, the sanctuary has worked hard to illuminate the connections between the struggles for animal liberation and LGBTQ rights.” 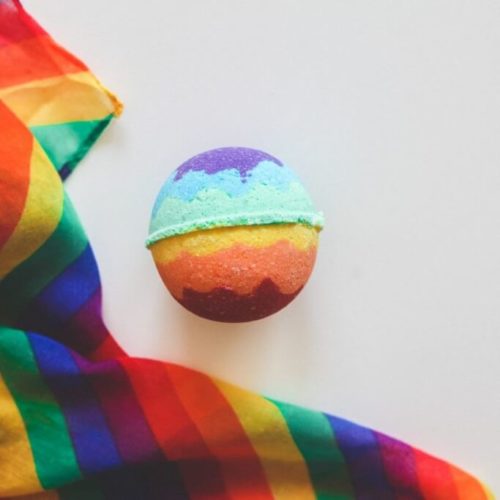 “Our access to cannabis would not exist without the incredible men and women who fought for Proposition 215,” the brand wrote. “Because of them, California would adopt its first medical cannabis legislation in 1996, opening the doors for AIDS patients and many others to gain access to plant medicine.”

Twenty percent of all sales from the bath bomb or its rainbow CBD oil benefit the Trans Lifeline, a nonprofit dedicated to fighting the high rates of trans suicide by providing critical services such as a hotline (run by and for trans people), microgrants for legal name changes, and education. 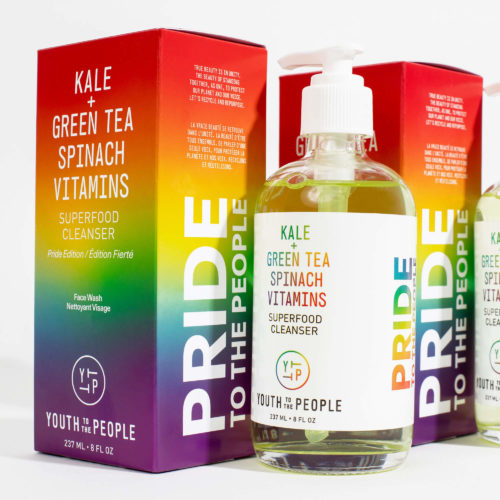 Youth to the People is cruelty-free and vegan

Cruelty-free and vegan skincare brand Youth to the People is putting its best face forward with a Pride edition of its award-winning Superfood Antioxidant Cleanser. Described as a “daily green juice cleanse for your face,” this cleanser is formulated to remove makeup and prevent clogged pores using ingredients like kale, spinach, and green tea. It’s free from drying ingredients like alcohol and sulfates. The founders of Youth to the People are donating 100 percent of the cleanser’s profits (up to $50,000) to GLSEN, an education nonprofit that works to make schools a safe, inclusive space for LGBTQ+ youth. 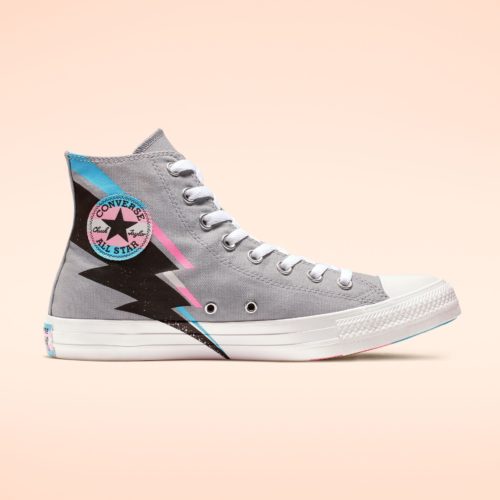 Converse has launched its Pride collection every year since 2014 and even collaborated with vegan pop star Miley Cyrus last year. The vegan-friendly brand is back at it again this year, featuring shoes with the Trans Pride flag motif for the first time ever. This year’s collection supports Converse’s ongoing partners such as the It Gets Better Project and OUT MetroWest. 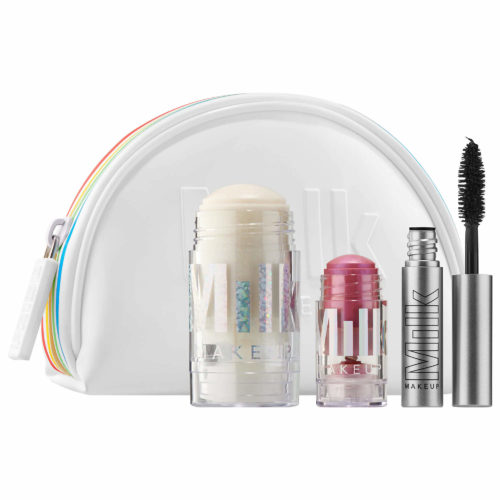 Vegan beauty brand Milk Makeup is celebrating Pride with a makeup bag featuring some of its most popular products, such as its hemp-infused Kush mascara, a rainbow glitter highlighter, and a prismatic holographic stick. According to the brand, 100 percent of all net proceeds go to New York City’s Lesbian, Gay, Bisexual & Transgender Community Center, which offers cultural events, arts, and entertainment as well as life-saving recovery, health, wellness, and family support services.

While Pride swag is nice, sometimes the best way to aid the movement is to make a direct donation. Show support to your local LGBTQ+ center (here’s a list of some centers), or give to causes such as The Trevor Project, the National Center for Transgender Equality, interACT, The Sylvia Rivera Law Project, Gender Spectrum, the Trans Women of Color Collective, or Lambda Legal.