Whipped cream. It’s the perfect topping for pumpkin pie, pancakes and waffles, fruit salads, scones, hot chocolate, milkshakes, and sundaes, too—if you dare to eat ice cream in the winter. With plant-based dairy increasing in popularity around the world, it’s never been easier to veganize your favorite recipes and desserts with some vegan whipped cream.

Consumers are increasingly moving away from animal products such as meat and dairy for their personal health. According to market research firm Mintel, around a quarter of British people now regularly drink vegan milk. While in the U.S., 50 percent of all Americans regularly purchase and consume dairy-free milk—whether vegan or not.

The United States Department of Agriculture (USDA) nutrition guide, MyPlate, suggests that meat and dairy are optional additions rather than essentials. Instead, MyPlate emphasizes whole, plant-based foods such as fruit, vegetables, and whole grains.

“As the leading source of saturated fat in the diet, dairy products contribute to chronic diseases, including heart disease and prostate cancer, that disproportionately harm or kill people of color,” Susan Levin, MS, RD, CSSD, and PCRM’s director of nutrition education, said in a statement.

Levin told LIVEKINDLY that the USDA has “a seemingly insurmountable conflict of interest.”  She explained: “It created [the guidelines] to support the nation’s agricultural interests. It was later asked to create nutrition guidance. The two tasks do not coexist well.”

The majority of people moving away from animal products are doing so for the sake of their personal health, as well as the impact of meat and dairy on the environment. Animal agriculture is a leading cause of climate change, and the beef and dairy industries are particular contributors to greenhouse gas emissions.

There has also been a significant increase in interest during the COVID-19 pandemic. Consumers are moving away from meat and dairy in favor of vegan protein and plant-based beverages. Oat milk, in particular, enjoyed a dramatic spike in sales earlier in the year.

In February, Nielsen Data reported an approximate 306 percent increase in demand for oat-based drinks. While one of the latest vegan whipped cream products—and number one on our list—is a budget-friendly oat-based topping. 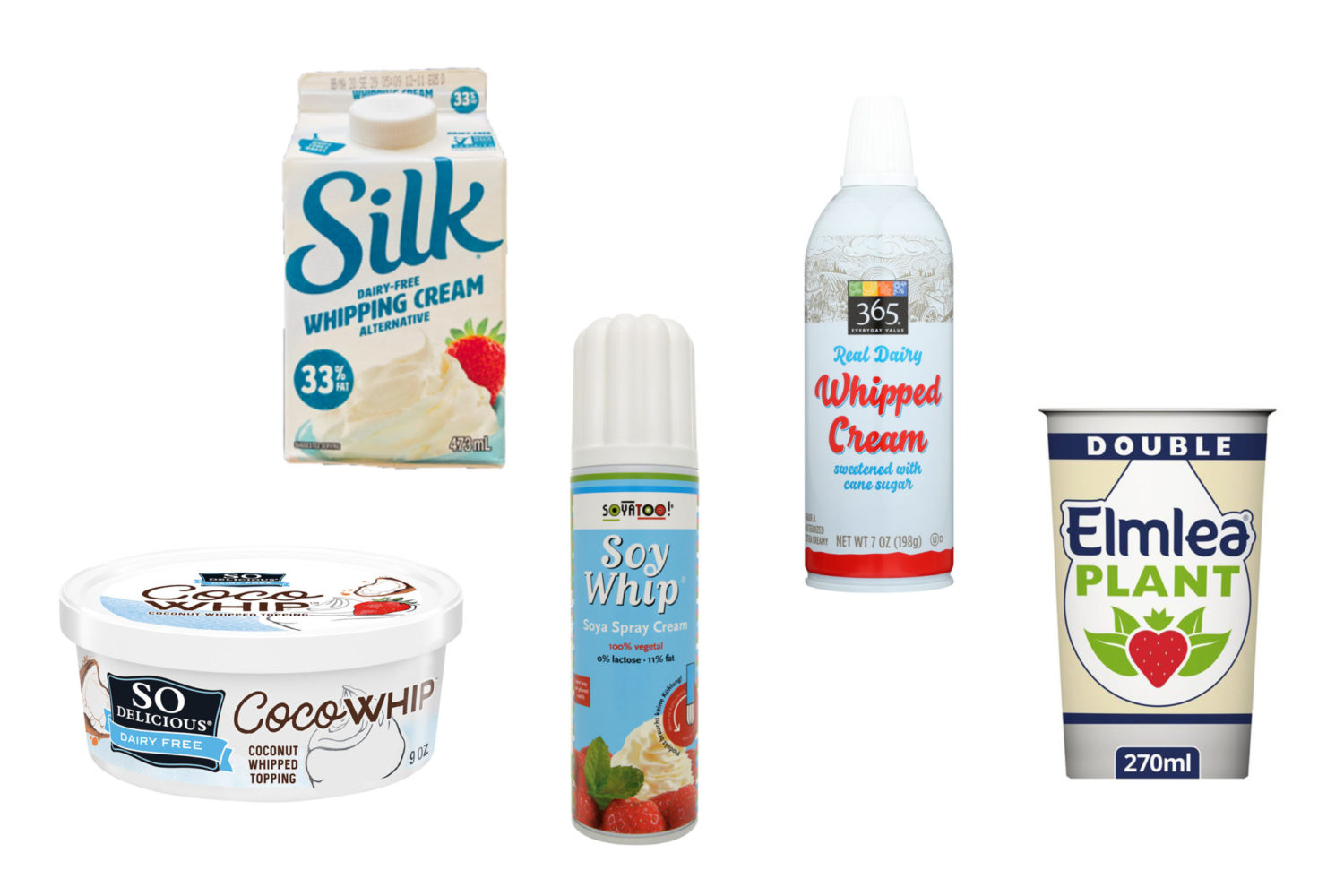 There are a number of plant-based whipped and whippable toppings available from UK and U.S. supermarkets.

As more plant-based foods are added to U.S. and UK supermarket shelves, a variety of brands now offer whipped vegan cream options. New, dessert-style products such as these are frequently included in Christmas and thanksgiving launches throughout the coming months of October and November. But here are seven of the top vegan whipped cream toppings available right now. 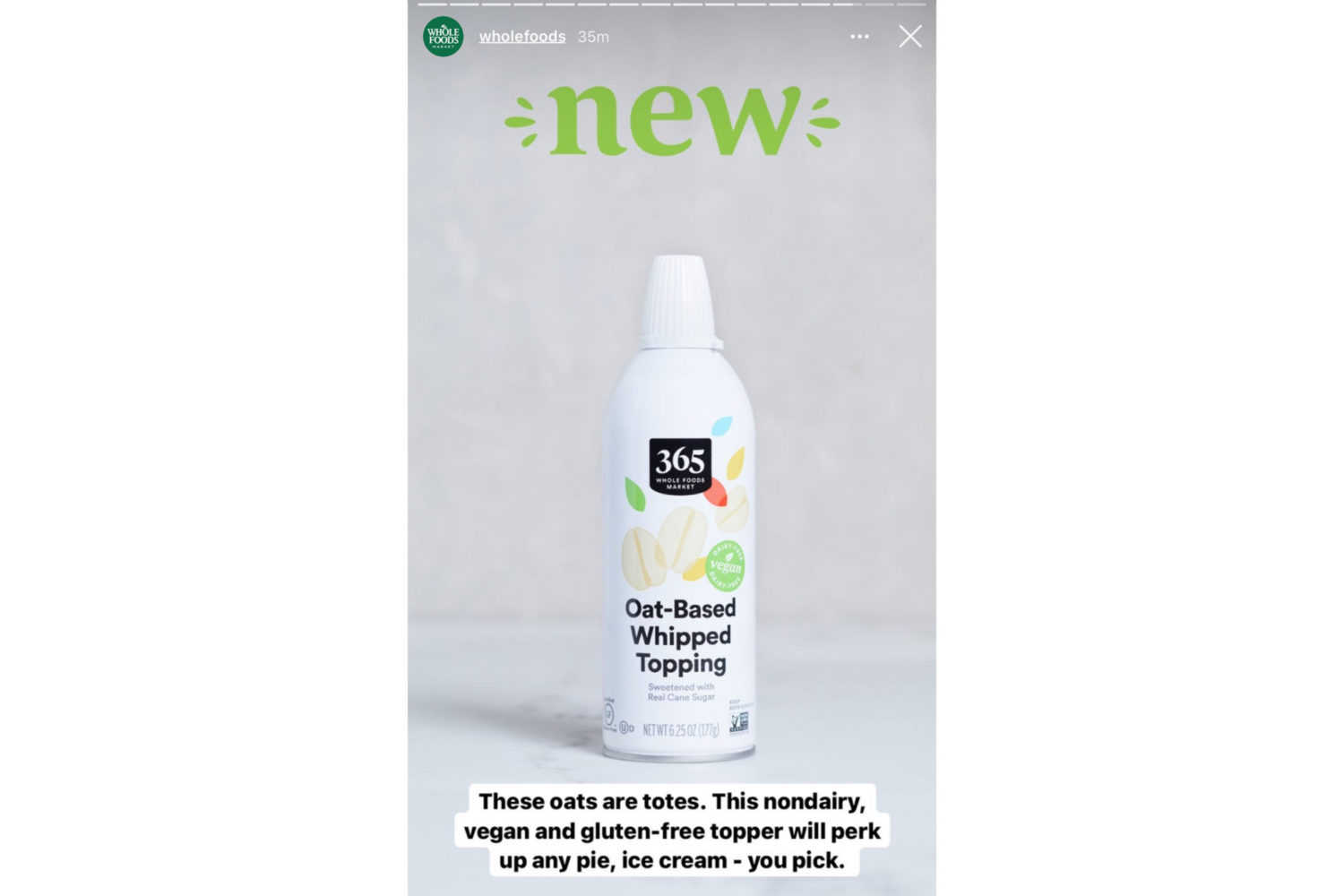 Whole Foods 365 Everyday Value brand stocks a coconut-based whipped topping in addition to a brand-new oat-based version glimpsed on the company’s Instagram stories. The Oat-Based Whipped Topping is certified vegan, gluten-free, and sweetened with real cane sugar. The spray can containers make both the coconut and oat varieties easy to add to drinks and desserts such as Whole Foods’ popular vegan pumpkin pie.

The new vegan oat whip is just the latest plant-based product launched by Whole Foods. Raw cookie dough, vegan croissants in the bakery’s dessert case, and a wide variety of vegan meat products—including vegan seitan “turkey” roasts—have all appeared on the American supermarket chain’s shelves over the last year. Some of its popular vegan products are also available at seven Whole Foods stores in the UK.

Whole Foods’ vegan whipped cream is currently only available in U.S. stores, but it could make an appearance on Amazon in the near future.

In 2019, Elmlea—owned by major dairy brand Upfield—launched two varieties of vegan cream. The thick double cream version is perfect for whipping and costs just 85p for a 270ml carton from Tesco, Sainsbury’s, Asda, and other UK supermarkets. According to the company, it pours and whips exactly like a traditional cream—ideal for use in baking and desserts.

Earlier this year, Upfield announced that all of its Flora products—including spreads, margarine, cheese, and butter—would be vegan-friendly. The company has since launched a Flora whippable plant-based double cream exclusively for service industry professionals. At the time, Upfield Professional’s head of marketing Alan Black described the new cream as a “game-changer for the foodservice industry.”

“Not only does it cater to those following a vegan diet, Flora Plant helps chefs overcome the challenge of managing allergens,” Black told FoodBev Media.

Soy Whip by Soyatoo! is available from online retailers in the UK such as the Ethical Superstore, Natural Collective, The Vegan Kind, and Amazon. On average, Soy Whip costs around £2.79 for a 300ml carton. Soyatoo! also produces coconut-based Cocos Whip, rice-based Rice Whip, and spray can varieties for easy application. Both the soy and rice versions are also available at certain health food stores across the U.S. Check out Soyatoo! Soy Whip here.

A post shared by So Delicious Dairy Free (@so_delicious)

Original Cocowhip from So Delicious is made with organic coconut oil. According to the brand, the frozen dessert topping is fluffy and creamy, perfect for topping sundaes, cakes, and other desserts. A “Lite” version is available with reduced fat content, and So Delicious also produces a variety of milks, creamers, yogurts, and other popsicle and ice cream bar-style frozen desserts. Check out the original Cocowhip here.

In January, plant-based milk brand Silk launched the first-of-its-kind dairy-free Heavy Whipping Cream. The Danone-owned label created the whipping cream for use in traditional recipes and can replace traditional dairy cup for cup. The suggested RRP is $4.49 per pint at grocery stores such as Walmart across the U.S.

“Silk saw an opportunity for a plant-based heavy whipping cream alternative and wanted to provide an easy swap for those looking to incorporate more dairy-free options into their diet,” said David Robinson, a senior brand manager for Silk, at the time. “As America’s No. 1 plant-based beverage brand, we see it as our responsibility to create plant-based options that everyone will love and enjoy.” Check out Silk’s Heavy Whipping Cream here.

Vegan whipped cream was first added to Trader Joe’s shelves in 2017 as a temporary, seasonal item. It eventually returned under the Sweet Rose label, and Sweet Rose Coconut Whipped Topping is now a permanent item. Perfect for adding to cakes and hot drinks, this squirty cream is made with a sugar-sweetened coconut cream base and has a creamy, nutty flavor.

Trader Joe’s coconut topping costs $3.29 per 6.5 oz spray can and is available at stores across the U.S.

Reddi Wip is the second most popular brand of canned whipped cream in the U.S. In 2018, it launched a vegan-friendly topping. The company produced both coconut and almond milk-based varieties, each featuring fluffy, sweetened, coconut cream dispensed from a can.

The whipped cream is available from supermarkets such as Walmart nationwide for approximately $3.38 per 6oz can. Reddi Wip previously said that it was working on vegan options to “cater to consumers’ growing interest in non-dairy, plant-based foods.” Check out Reddi Wip coconut here.