Called Honeybee’s, NYC’s newest vegan eatery is the latest venture from restaurateur and bar owner Ravi DeRossi, known for East Village establishments like Mother of Pearl, Avant Garden, and Cienfuegos. The latter of which was closed down after 10 years of business to be re-opened as Honeybee’s.

Speaking to East Village publication EV Grieve last November, DeRossi said,“I was either going to update the decor, menu, etc., or completely change the concept. In the end I decided it would be a lot more fun to change the concept.”

The all-vegan menu was developed by chef Amira Gharib, who previously helmed The Matador Room in Miami — a favorite of Enrique Inglesias. 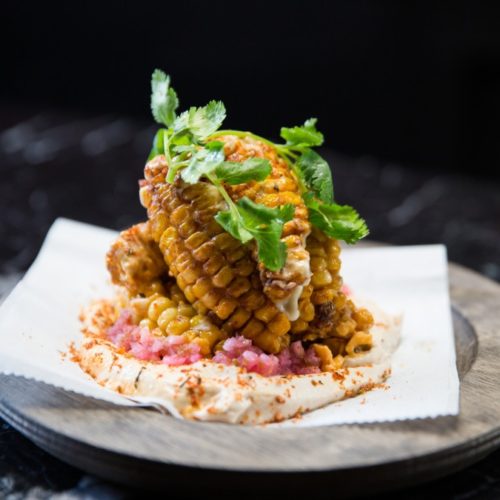 The beverage program features a rotating list of 60 to 70 American whiskeys as well as tequila, mezcal, and creative twists on cocktails. The Salt Peanuts Whiskey, for example, combines Old Overholt Rye with peanut syrup, peanut bitters, and salt, to wash down meat-free BBQ.

Honeybee’s interior draws inspiration from the Old West — the interior design evokes a “high-end watering hold in the Wild West” with a modern twist. The 60-seater restaurant features details made from reclaimed wood, red and black velvet, and antique mirrors. There’s even an authentic player piano to set the mood.

“Honeybee’s is meant to be a sultry and sophisticated saloon, paired with the casual and nostalgic air of down-home barbecue,” DeRossi said in a statement.

According to DeRossi, the restaurant gets its name from is dog, a Hurricane Katrina rescue.

“I wanted to dedicate the name to Honeybee – she’s a classic American beauty from the South and taught me what it was to share a bond with an animal,” he said. “She’s really inspired me, and has helped me recognize that all animals have a soul. I look forward to capturing her spirit with this spot.”

DeRossi also has a 24-hour vegan diner named Dollface in the works.

Honeybee’s is open now at 95 Avenue A in NYC’s East Village.