The creamy spread – made with almonds – was launched by German company Vantastic Foods.

London-based vegan supermarket GreenBay wrote about the product online. The “indulgent and carefully handcrafted” Nutella-like spread “makes toasts a treat for the palate and the crêpes an unforgettable dessert,” the company said.

Vantastic Foods has been making vegan food for nearly 15 years. With plant-based meats like duck, jerky, doner meat, and fish fingers, and vegan candy like cola bottles, sour worms, and chocolate advent calendars, the company aims to “get more and more people excited about veganism.”

The company also strives to make veganism accessible to the masses, allowing people to enjoy the food they like whilst living in line with their values.

“We hope our assortment will allow more and more people to eat vegan every day, without giving up the dishes they’ve known before. You can be sure that they are good for the environment and the animals,” Vantastic Foods says, adding that its vegan products are “in no way inferior to the animal counterparts.” 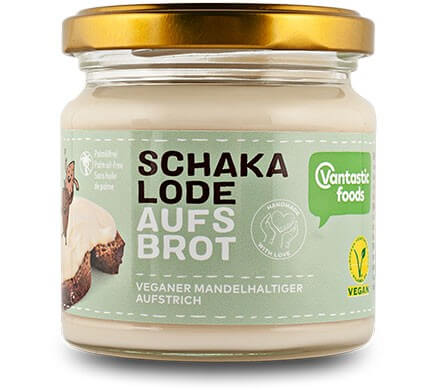 The creamy vegan spread is made with almonds

Fellow German brand Vego launched a spreadable version of its famous vegan hazelnut chocolate bar. Made with whole hazelnuts, hazelnut paste, and hazelnut cocoa cream, the recipe replicates the smoothness of dairy-based chocolate and the taste of Nutella.

In March, Co-op supermarkets in the UK began selling vegan Nutella in squeeze bottles. The dairy-free chocolate spread was crafted by Nature’s Store, one of the fastest-growing “free from” brands in the UK. The Hazelnut & Cocoa Spread is also free from palm oil.

A similar spread is also available in the U.S. The chocolate dip, made by Soom Foods, is made with three ingredients: tahini (sesame seed paste), cocoa powder, and powdered sugar. Like Nature’s Store’s products, Soom Foods doesn’t use palm oil in its offerings, unlike the Nutella brand.

Those eating plant-based can enjoy the Nutella flavor on more than just sandwiches. Earlier this year, ice cream brand Halo Top launched three dairy-free flavors. One of them is said to taste just like Nutella.