wAside from peanuts and Cracker Jack, baseball tends to be associated with vegan un-friendly food like burgers, hot dogs, corndogs, cheesy nachos, and steak sandwiches. But times are changing and even Yankee Stadium, one of the best-known baseball stadiums, is on board with vegan options.

How Vegan Food Is Going Mainstream

Once associated with embarrassingly bland veggie dogs (love you, Tofu Pups), vegan food has made leaps and bounds in a short time span. According to Mintel, 52 percent of U.S. residents prefer the taste of plant-based protein to meat. Realistic burger options from brands like Impossible Foods and Beyond Meat find more customers in meat-eaters than vegans.

Both companies are also becoming increasingly mainstream, served at major chains like White Castle, Del Taco, Red Robin, and TGI Fridays. Beyond Meat even recently kicked off a campaign called “Go Beyond” featuring professional athletes, highlighting how meat-free food has benefited their health.

There aren’t many reports of baseball players ditching meat, dairy, and eggs. Veteran Yankees southpaw pitcher, CC Sabathia adopted a plant-based diet in January 2018 in order to improve his health, according to MLB.

At least seven members of the LA Dodgers follow a dairy-free diet for health reasons: Corey Seager, Max Muncy, Kiké Hernandez, Ross Stripling, David Freese, and Kenley Jansen. Former second baseman Chase Utley did it to slow the ageing process and found that it alleviated chronic pain and inflammation. Others realized that it cut down on recovery time.

“You’re talking about playing 162 games in 180 days. You’re talking about wearing cleats for all of those, which hurts your feet. Everything hurts. Anything you can do to gain an edge and make your body feel better on a daily basis, why wouldn’t you try it?” Seager told The Athletic. He originally ditched dairy while recovering from hip surgery and credits his new diet for allowing him to continue workouts.

While there have been no definitive studies about why athletes would benefit from a dairy-free diet, Dr. Susan Levin, Director of Nutrition Education at PCRM (Physicians Committee for Responsible Medicine) explained that conclusions can be drawn from these patterns.

“Dairy is the number one source of saturated fat in the American diet. For children, it’s milk. For adults, it’s cheese, and that saturated fat can cause inflammation” Dr. Levin told LIVEKINDLY. “We know from studies that exercise-related oxidative stress is linked to inflammation and slower recovery.”

“These athletes are most likely replacing dairy with plant-based alternatives, so what they’re doing is including more antioxidant-rich foods in their diet. That’s going to lead to better recovery time and less inflammation,” she continued.

Over the past few years, more MLB parks have added vegan options to the menu. International animal rights group releases an annual list of the nation’s most vegan-friendly ballpark — surprisingly, Yankee Stadium didn’t make it into last year’s top 10 list. But Citi Field, home stadium of the Yankee’s sometimes-rival the Mets, did rank seventh. The stadium even welcomes its first completely vegan burger stand, Marty’s V Burger, this year.

Several stadiums, like the Pittsburgh Pirates and the Seattle Mariners, host regular vegan nights where guests are fed a special plant-based menu. Yankee Stadium has taken steps to include more vegan options, like adding the Beyond Sausage the Bareburger location last April. Here are the other plant-based options you can find at Yankee Stadium. 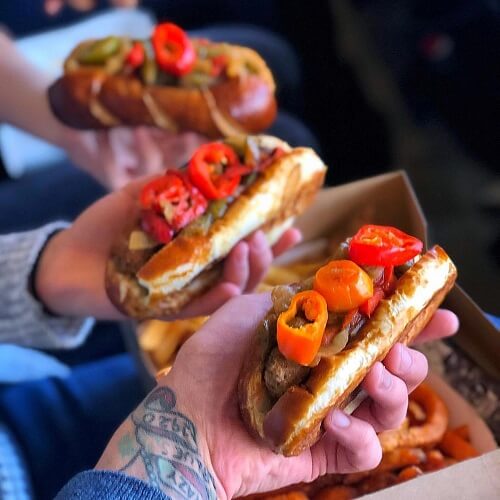 Founded a decade ago in Astoria, Queens, Bareburger is known for having plentiful vegan options. The chain, which has nearly 40 locations, is even in the process of transitioning to a 50 percent vegan menu, according to a recent Instagram post, thanks to its vegan chef, Rudy Ramos aka Vegicano.

The Bareburger at Yankee Stadium doesn’t offer the full menu, but has options to munch on while you root for the home team. There’s the Beyond Sausage, a vegan frank served in a Pretzilla pretzel bun topped with pickled jalapeños, and caramelized onions. It’s made by California-based brand Beyond Meat, which is made from pea protein and has a realistic taste and texture right down to the “snap” of the skin.

New to 2019, the Yankee Stadium Bareburger now serves the Changeup, featuring the Impossible 2.0 burger with caramelized onions, dill pickles, and green leaf lettuce on a sprout bun. To make your order vegan, get it without the special sauce and American cheese. Get the Avocado Bites — deep-fried avocado slices served with spicy habanero sauce — on the side. Or, you can never go wrong with a side of fries of the classic or sweet potato variety. 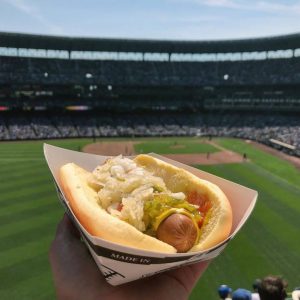 Sections 205 and 234 both offer vegan burgers from Field Roast Grain Meat Co. The meatless patty is made from a blend of vital wheat gluten (aka seitan or wheat protein), barley, mushrooms, carrots, and spices. The company hand-forms all of its “Fieldburgers” by hand in Seattle.

Section 115 serves Field Roast Frankfurters, which look and taste like classic ballpark dogs. Like the plant-based burgers, these franks are made from vital wheat gluten and barley. You can also find Field Roast vegan burgers and dogs at other MLB stadiums — Instagrammer Vegan in Vancouver found hers (pictured above) at the Seattle Mariners’ T-Mobile Park. 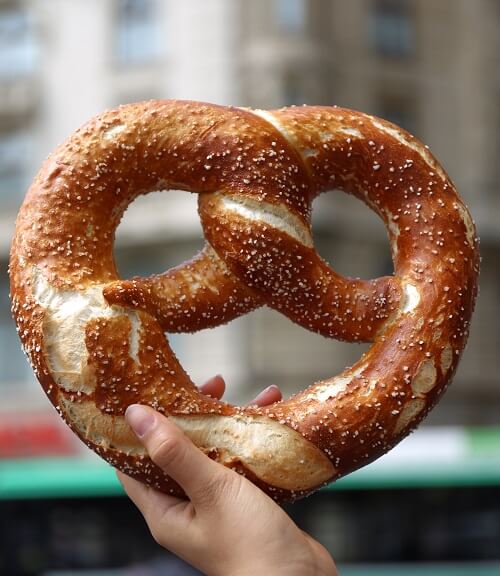 Is it a baseball game without a big soft pretzel? Concession stands throughout Yankee Stadium serve the signature ballpark treat — which, according to its food guide, are vegan. Get yours with some mustard and enjoy the game. 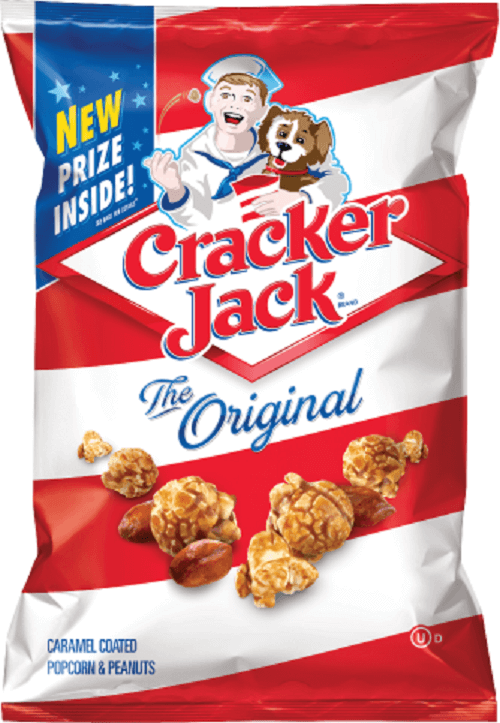 Cracker Jack is vegan. The 123-year-old snack, which consists of popcorn with a crunchy dairy-free caramel and molasses coating with peanuts, is a ballpark classic as immortalized in the tune “Take Me Out to the Ball Game.” Yankee Stadium caused a bit of controversy by getting rid of the Cracker Jack, replacing it with another brand of caramel corn, Crunch ‘n’ Munch, in May 2004. Officials brought Cracker Jack back two months later to placate angry fans. 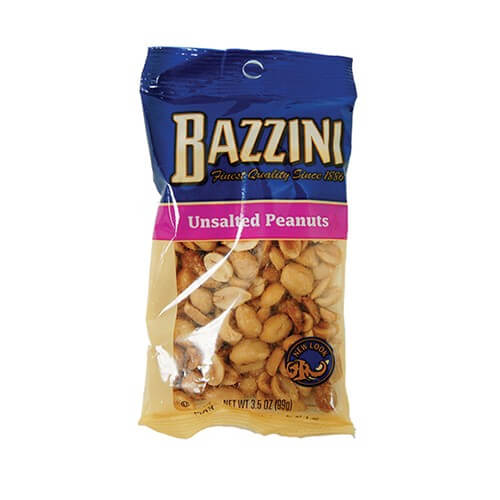 Bazzini peanuts are an iconic part of the Yankees game experience

Bazzini peanuts are just as much an iconic part of the ballpark experience as Cracker Jack — it’s even in the song. Yankee Stadium has served Bazzini nuts since the inaugural game against rival team, the Boston Red Sox, in 1923. Like Cracker Jack, you can get peanuts from the sales people who walk up and down the stadium aisles throughout the game. 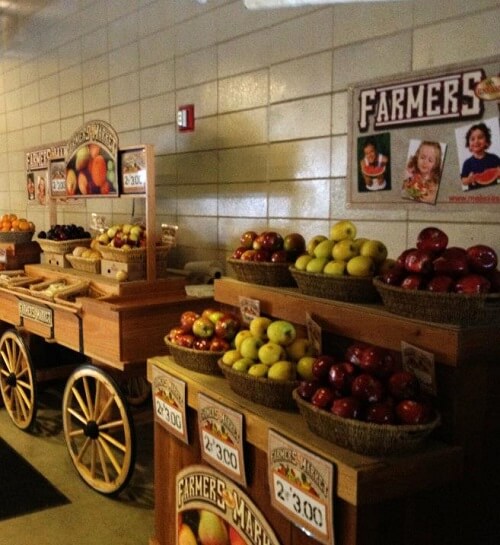 Craving something on the healthier side? Melissa’s Farmer’s Market in section 121B has fresh fruit like apples and bananas, salads, and healthy snacks. According to the New York Times, the market-inspired stand sells 200 pounds of produce during each game. 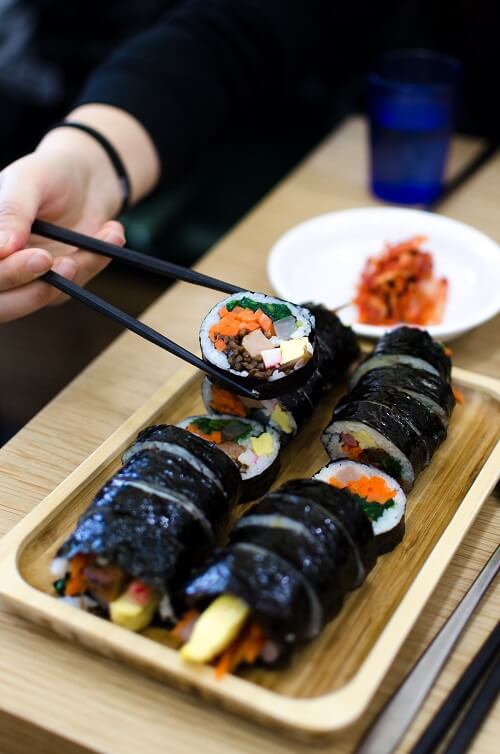 While it’s not traditional ballpark fare, you can find veggie sushi and edamame at the Noodle Bowl stand in section 127B. 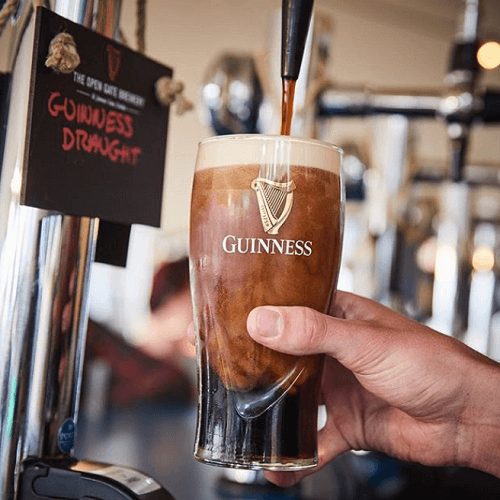 For some, no baseball game is complete without a tall glass of beer. Vegan beer options at Yankee Stadium include:

Yankee Stadium has a wine bar, thanks to a partnership with City Winery Wine Bar. According to Barnivore, the Bacigalupi Vineyard Pinot Noir is vegan.