Dairy-free yogurt is a booming industry; the market is expected to be valued at just under $7.5 billion by 2027. However, the International Agriculture Group (IAG) is looking to further expand and improve upon this popular product by using innovative ingredients, specifically, green bananas. The IAG is optimistic about its upcoming vegan yogurts, and the organization has applied for a patent to capitalize on this unorthodox ingredient.

According to FoodNativgator-USA, IAG believes that the use of green banana flour, “NuBana,” will “improve the taste, texture and sensory characteristics compared to commercial non-dairy yogurts currently on the market.” The green banana flour is processed through a series of heating and cooling steps, along with the addition of enzymes, to create a base for additional ingredients to be added, such as almond, buckwheat, flax, oat, potato, amaranth, or other high-starch plants. The goal is to produce a thick, creamy, silky product that will rival (and perhaps outshine) any other dairy-based yogurt on the market.

IAG recognizes the growing demand for plant-based and non-dairy alternatives, and states in its patent application that the goal is to “broaden the consumption of yogurt products to the growing lactose intolerant, healthy focused, consumer base.” 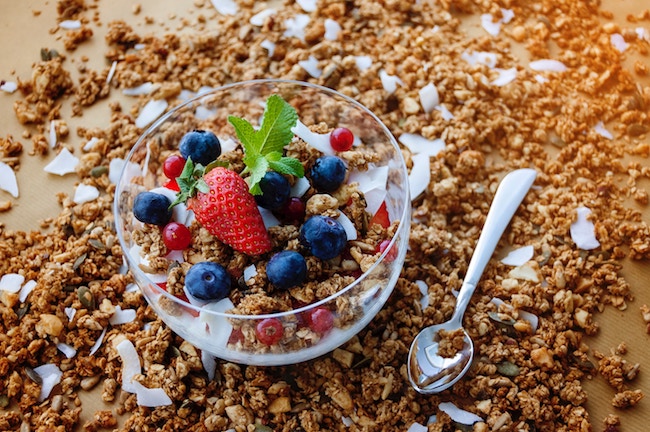 Although banana yogurt may be the first of its kind, this is not the first vegan dairy alternative to be recreated with bananas. “Nice cream” is a vegan soft-serve made by blending frozen bananas, and has been around for decades, first popularized by vegan and healthy food bloggers. A new vegan ice cream company, Hakuna Banana, is even making nice cream pints, available at many major US retailers. A few other plant-based companies, such as Banana Wave and Moola have also created dairy-free milk made partly from bananas.

Banana-based yogurt may be the next new thing, but there are already several vegan yogurt companies who have developed loyal followings with their exceptional plant-based products. Coconut yogurt brands, such as CocoYo and The Coconut Collaborative, have both gained positive attention for their Greek-style products that hold up to dairy counterparts. Vegan milk brands have also capitalized on the non-dairy yogurt craze, creating a plethora of options for consumers looking to eat more plant-based. From Good Karma Foods’ flax-based yogurt to soy and almond varieties from SoDelicious and Kite Hill, and even pea-based yogurt from Ripple, there is proving to be a vegan yogurt for virtually any dietary preference.