Let’s make no bones about it

We all know someone who claimed they were ‘going vegan’ and within a matter or months, weeks (or perhaps days) were caught hidden between McDonald’s dumpster bins, ravaging a Big Mac. It happens, right?

I myself tried vegetarianism numerous times in my very early teens and repeatedly failed due to various reasons – health food shops were way too expensive for a paper-round budget, and I wasn’t smart enough to realize that I could just go and buy veggies.

Well – most people are more astute than I was at that age but interestingly it is estimated that a staggering 84% of people who try a vegan or vegetarian diet go back to eating meat.

Perhaps you have had this experience yourself?

5 Reasons Why Some Vegans Fall Off The Wagon

We’ve all spoken to vegans and vegetarians who say they “don’t miss meat”, and they are likely telling the truth, however with that being said, craving meat and dairy early in the transition of your diet is completely normal and those very people who don’t miss the stuff, have likely been through this phase too.

Think about it like giving up smoking – although it’s debatable that we have an addiction to meat, some of the principles stay the same:

If this sounds like you, then there are a few things you can do to help keep you on track and better understand your cravings –

The concept of weightloss and veganism usually come hand in hand and is frequently used as a ‘selling point’ for the lifestyle. Of course having a lower BMI is associated with overall better health, but what if you don’t want or need to lose weight?

Well, you absolutely don’t have to. There are so many variations of vegan diets which work for everyone, no matter your ailment or weight goal, and one very simple rule of thumb here is: Eat. More.

Eggs, dairy & meat are all calorically dense foods so when you give this up, one would assume it’s inevitable to drop a few pounds; and it’s likely you will unless you replace the calorie deficit.

One big mistake people make is changing what they eat but not how much they eat. 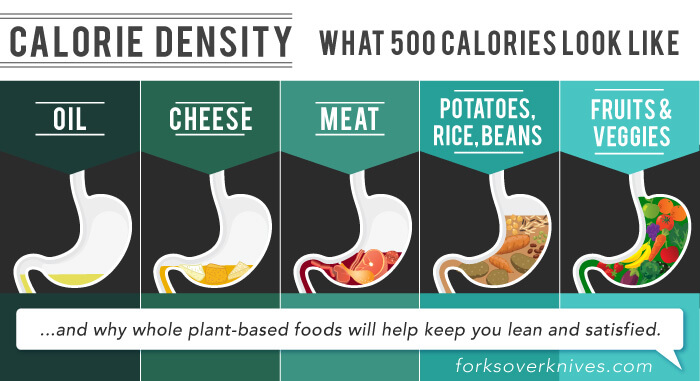 And as detailed in the visual above, you can see that you need to eat a much bigger portion of fruit and vegetables in order to feel full. That doesn’t necessarily mean eating 6-7 meals a day (unless you want to), simply adding more food to your plate will do the trick.

If you’re already slim, you may want to include more plant based fats like avocados, nuts, seeds, oils, vegan butters or even beans and legumes. Rice, oats, pasta and other grains are also great options for extra calories.

It always baffles me that no one really cares that much about nutrition when they’re on an omnivorous diet – we just assume that we get everything we need.

Interestingly the largest organization of food and nutrition professionals (The Academy of Nutrition & Dietetics) and a number of other medical institutes state that a vegan diets are suitable for all.

If you are already healthy, you have little to be concerned about but should keep in check that you are getting adequate nutrients and eating a varied diet which include a mixture of vegetables and grains. This applies to everyone, vegan or otherwise. 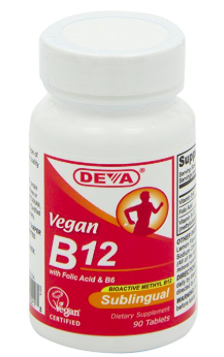 One nutrient vegans and meat eaters do struggle to get is vitamin B12 which comes from the earth. We can get some of this through meat, either because the

animal is artificially supplemented or is grass-fed (although even grass-fed livestock can still be low in B12 as our topsoil’s reserves have been vastly depleted). You can supplement daily, weekly or eat a serving of fortified food to ensure you’re not deficient.

It’s worth noting that our most common illnesses such as Diabetes, Hiatus Hernias, Colo-Rectal Cancer, Appendicitis, Gallbadder Disease, Heart Disease, Coronary Thrombosis, Constipation and many more are a rarity in those who consume a whole foods plant based diet and in some cases the diet has been used to reverse certain diseases.

Urgh, because who wants to read labels when they’re grocery shopping or seem like a picky eater when choosing from a menu, right?

Luckily supply and demand has been on the side of  us veggies recently; with a massive 360% increase in veganism in the UK over the last decade, we are seeing it reflected in the products on our shelves.

In the UK, grocery stores like Asda have committed to labelling all of their vegan products, Sainsbury’s have brought out their own line of vegan cheeses and microwave meals, Zizzi’s restaurant has launched their own 100% vegan menu, and in London you can even get vegan fried chicken. The best thing is, this is just the beginning.

Be confident that unless you’re living somewhere extremely remote, you can find vegan options. Take a look at the diet of the Okinawans for example; the healthiest next to the Seventh Day Adventists, centred mostly around sweet potatoes because that’s all that was accessible to them.

One of the downsides of veganism in the modern world, particularly if you consume a lot of processed foods, is of course the label-reading. And this one, unfortunately is unavoidable. My personal opinion on this though, is why wouldn’t you want to know what you’re putting in your body? 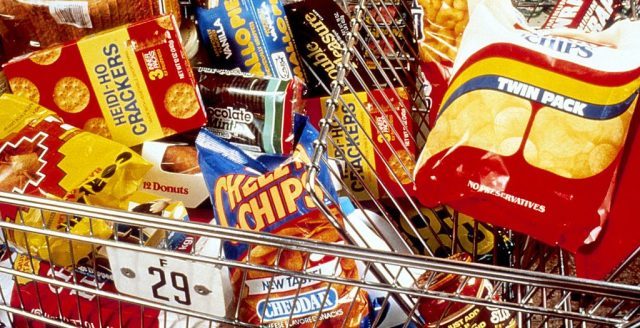 New vegans are often shocked to find how many products contain milk and eggs, E numbers from chicken bone, crushed beetles or pig innards. Make life easier for yourself by researching the ingredients to avoid or downloading an app which lists them for you. Some can even scan product bar codes.

And as for eating in restaurants? I recommend the Happy Cow app which can be used globally and indicates vegan and veg friendly restaurants across the world, with new additions sprouting up all the time. Additionally, most chefs are accommodating to dietary requirements nowadays – sometimes you can take off the cheese from the vegetarian option, or they may be kind enough to make you a custom order. Worst case scenario? Make your own meal from the sides or order triple-fries.

Cognitive Dissonance is a psychological term for when an individual holds contradictory values to the actions they perform. When presented with information conflicting our existing values, we often feel uncomfortable and react in anger, aggression or justification.

An example of this is:

Someone who intentionally beats their dog, but claims to love and care for their pet.

People who eat meat and claim to be animal lovers and compassionate to other species.

The action VS what is being said contradict each other and cannot coexist; similar to the dichotomy of humane slaughter. The reasons so many of us suffer from Cognitive Dissonance, particularly when it comes to eating meat is that we are socially conditioned to think this way from a young age and throughout life. We see advertisements every day for meat and dairy and told by our mothers to drink milk for strong bones…. why would we question the person who only wants the best for us?

The truth is, the meat and dairy companies are industries backed by millions of dollars and strong government ties – they can afford to pay scientists and doctors to conduct bias studies and there isn’t a governing body financially big or willing enough to stop them – nope, not even The Broccoli Industry.

Until the mental connection is made that breeding and killing animals for food is wrong, the majority of people will go back on their choice to go vegan.

In the mood for some eye opening documentaries? Try watching Earthlings

and latest release, What The Health