Bristol-based vegan group Friends Not Food invited slaughterhouse workers to join them for a plant-based Christmas dinner in a bid to promote festive peace and compassion.

The animal welfare advocates, local to Gloucestershire, visit Westerleigh’s Tulip Slaughterhouse every Monday and Tuesday to pay vigil to the pigs taken to slaughter. They often document the experience and share it on social media in a bid to raise “awareness so that more people make the connection and transition to a plant-based diet and vegan lifestyle, so the unnecessary suffering of these beautiful animals one day ends.”

Though vegans and slaughterhouse workers are typically considered to be on “opposing” sides, the two groups put their differences aside to share a plant-based Christmas dinner at The Acorn Cafe. 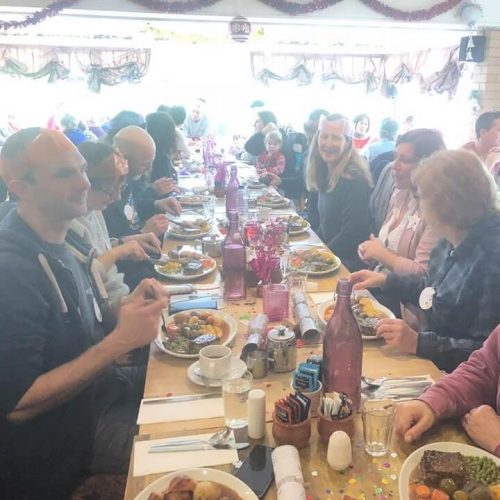 Over a nut roast, the vegans showed the meat industry workers – management included – that they “are not there to have a fight with slaughterhouse workers or drivers.” They only want to show “love, kindness, comfort and compassion” for the animals as well as the planet.

The occasion symbolises the importance of unity and how positive approaches and leading by example may be the best way to draw new people – even slaughterhouse workers – toward veganism. The message is particularly relevant at Christmas, as family members with varying dietary choices and ethical stances share mealtimes together. Friends Not Food believes that “Only light can dispel darkness, Only love can dispel hate,” and urges others to “focus their energies on positivity rather than negativity.”

The group also hosted outreach events in Bristol city centre to spread a Christmas message of compassion. The participants engaged with members of the public to discuss why turkeys are best kept off the dinner plate, attracting attention with a huge inflatable turkey named “Tony.”

This is not the first time animal rights advocates and benefactors of the animal agriculture industry have shown unity this festive season. Before Thanksgiving, a farmer released 100 live turkeys to activists including  “Babe” actor and vegan activist James Cromwell. The rescue was described by Direct Action Everywhere founder Wayne Hsiung as “the result of an unlikely friendship” and the epitome of “Thanksgiving mercy.”

Vegan Christmas food is taking centre-plate more than ever this year, as animal-free products appear all around the globe. Australia’s leading supermarket Woolworths recently introduced its own-brand Plant Based Loaf, and in the U.S., vegan restaurant chain Veggie Grill will remain open on December 25, serving up its “Turkey” Dinner Sandwich.