Everyday vegan activists have taken to the streets to promote the plant-based lifestyle. However, rather than protesting, they’re expressing a modern cruelty-free message through street art.

Dubbed the “Vegan Chalk Challenge,” people are getting involved in the plant-based movement by writing and drawing on streets. Kathy Martin is one of such street activism artists. She recently chalked two streets with the message, “Watch ‘What The Health’ on Netflix,” to show her support for the film and engage others. Her efforts were posted to the Instagram account, Vegan Chalk Challenge. 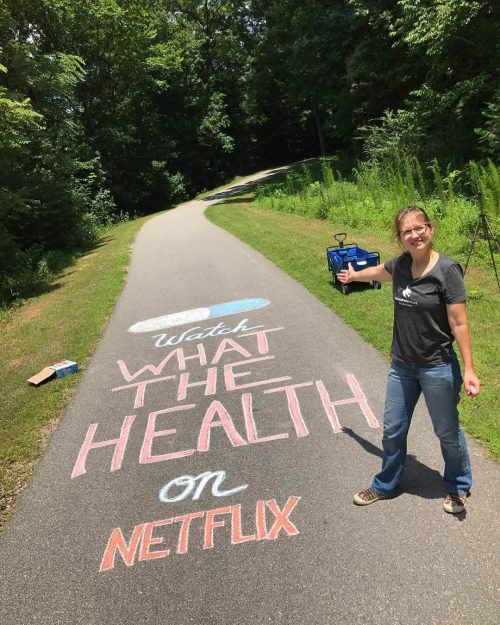 “What The Health” is a highly-praised film that has inspired a large number of people to try a completely plant-based diet or at least dramatically reduce their consumption of animal products. Last year, it secured a nomination for a prestigious film award from NAACP. It has even been touted as the first effort of its kind to explicitly highlight public health issues and solutions in relation to a vegan diet at such a large scale. The film encourages wellness and sustainability through the plant-based diet, which have been two of the most convincing factors in encouraging its viewers to go vegan.

Celebrities such as Andrew Brady, Lewis Hamilton, James Arthur, and Ne-Yo all opted to adopt a plant-based diet after viewing the film and taking its message to heart, or plate rather.

Even after months since its premiere, the film’s momentum did not slow down. The audience grew, thanks to word of mouth, or in this case, community street art.

“What the Health” is unlike many other vegan documentaries, for it does not focus on gruesome images of factory farms. Although effective, these images can be off-putting to some viewers, causing them to dismiss the message altogether. Vegan activism can be seen in the same way. Some activists can come off as too aggressive, intense, or extreme. However, this vegan street art promotes the movement in a non-confrontational, light-hearted manner.

Other messages people are writing include, “be one less person harming animals” and “animals are our friends, not our food.” Another “inspired chalking” also encourages people to check out Challenge22, a two-week vegan challenge co-founded and endorsed by internationally-renowned musician Beyoncé. Forget social media, it looks like chalk writing is the new way to get the word out.