Veggie Pret is now on TikTok. The meat-free outlet of the UK-based sandwich shop chain Pret A Manger just joined the platform in celebration of its new vegan croissants. Or, should we say—kwassonts?

The veggie outlet teamed up with bandmembers Reece Bibby and George Smith of the British pop group New Hope Club. In addition to making music hits, the viral TikTokers have 9.2 million likes and 697,000 followers on the platform.

Veggie Pret’s TikTok features videos of the bandmates spoofing the popular “I could’ve dropped my kwassont” vine. The video shows a man nearly drop his croissant—which he pronounces as “kwassont”—after someone scares him. Other TikTokers have joined in on the fun, uploading their own videos of them almost dropping their croissants.

But Veggie Pret’s croissants aren’t the only vegan thing on the menu. Last month, Pret A Manger launched vegan bakery cases at all of its Veggie Pret locations. 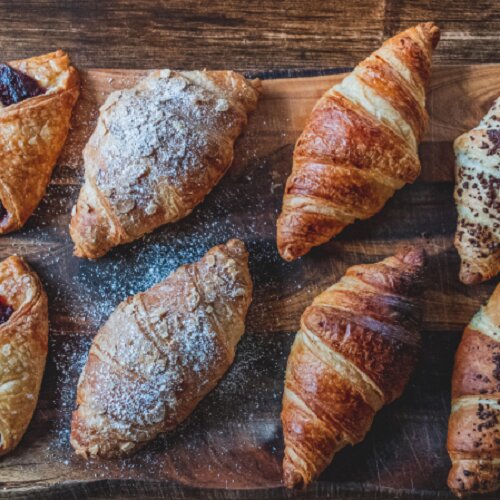 Pret A Manger launched vegan bakeries in all of its Veggie Pret locations. | Veggie Pret

Veggie Pret first started out as a pop-up in 2016 and has since expanded into permanent locations throughout Manchester and London.

Earlier this year, Pret A Manger began buying out and converting its rival café chain, EAT, into Veggie Pret locations.

Although the veggie outlets are already meatless, the company overhauled its menu in January—adding 15 new vegan items to its menu.

The new menu features three new vegan categories: vegan smoothie bowls, vegan poké bowls, and buddha bowls. It also includes versions of its most popular sandwiches like the BLT and the tuna baguette.

“This launch is an opportunity for us to establish Veggie Pret’s menu,” said Pret’s Global Head of Food Innovation, Hannah Dolan, in a statement sent to LIVEKINDLY.

“We wanted to put a real focus on creating new vegan dishes,” Dolan added. “So [we] looked at where we could use vegetables and fruits to deliver flavour.”