According to a PETA Latino report, the mayor of Zula in Venezuela has banned bullfighting in his city so that the bullring is a ‘place for everybody.’

Mayor Willy Casanova claims that ‘the bullring is a space that was used for the death [and] the anti-values…We come from living moments of hatred and we do not need to continue transmitting that message.’ 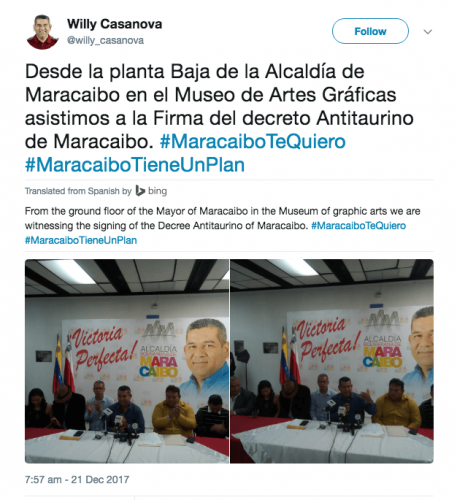 Although bullfighting originated in Spain, it still happens in many Latin American countries today, and Casanova’s hard stance against it shows that the ‘sport’ is becoming outdated, especially as the world becomes more conscious of animal cruelty. According to PETA, thousands of bulls die in these fights every single year. ‘If the crowd is pleased, the bull’s ear and tail may be cut off and presented as a gift,’ says PETA Latino.

In his statement, the mayor also said ‘The role of the bullring will be changed…we will change the status…so it is a place or everybody.’

The decree, called the Decree Antitaurino of Maracaibo was signed on December 21st 2017.