The Very Good Food Company—parent company of The Very Good Butchers—saw an 800 percent increase in stock value within the first few days of trading on the Canadian Securities Exchange earlier this month.

It began trading on the open market on June 18 after completing its initial public offering (IPO) on June 16. The Very Good Butchers is a Canadian plant-based butcher brand and shop. It is the second vegan meat brand to IPO after California-based Beyond Meat in May 2019.

Founded by trained chefs James Davidson and Tania Frieson, the Very Good Butchers is more than a deli. It’s a food technology company; it designs, develops, produces, and distributes a variety of plant-based meat products.

The shop opened three years ago in Victoria, B.C., and was the first vegan butchers on the west coast of Canada. In 2018 The Very Good Butchers appeared on the reality series Dragon’s Den, where entrepreneurs pitch business plans to five multimillionaires for the chance of investment.

The company has since opened a bigger shop and launched a manufacturing facility in Victoria. The shops feature a variety of menu items made with the brand’s meat and cheese. These include burgers, sandwiches, and loaded fries.

New Canadian investment company Eat Beyond Global Holdings announced that its first investment was in The Very Good Food Company. Eat Beyond aims to fund the growth of ethical and sustainable food alternatives such as plant-based meat. 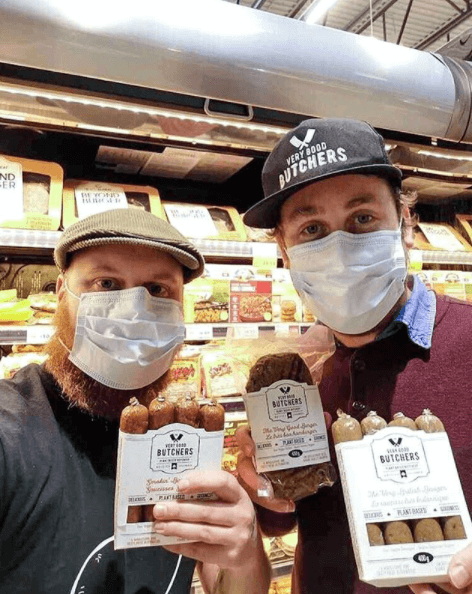 The Very Good Butchers products are available in more than 150 retailers and restaurants in Canada. | @theverygoodbutchers

‘This IPO is a Critical Milestone’

The Canadian Securities Exchange lists The Very Good Butchers as The Very Good Food Company under the symbol VERY. Per the press release, It commenced trading at a “price of $0.25 per Common Share for gross proceeds of $4,025,000.”

CEO Mitchell Scott told LIVEKINDLY in an email that the “IPO signals a broader interest in the plant-based market as a whole.”

“More and more people are choosing plant-based protein options,” he added. “This lifestyle change is starting to guide investment decisions as well.”

“As the second company to IPO in this space we very excited that our customers can now own a piece of our company and share in our growth,” said Scott.

Currently, the company has a team of four scientists in Vancouver. They work to develop new products and improve the taste and texture of the brand’s plant-based meats. It is in the process of building another factory in Vancouver.

The Very Good Butchers’ products—which include The Very Good Steak, Pepperoni, and Ribz—are in over 150 Canadian retailers and restaurants. It also offers Butcher Boxes for delivery, which can be bought as a one-off or on a monthly subscription basis.

The Very Good Butchers are currently experiencing “overwhelming demand” online during the COVID-19 pandemic. “We have seen significant growth in our eCommerce and in-store sales,” continued Scott. “Including a rapid increase in subscriptions to our monthly recurring delivery service.”

“We intend to scale our operations aggressively,” he added. “And continuously reinvest in creating the highest quality, most innovative plant-based products for our customers.“