The aim of the installation — which mimics the root structure of the mangrove trees that used to grow in the harbor before urbanization — is to encourage marine biodiversity and to improve water quality.

According to Dezeen, each irregular-shaped tile making up the seawall is made with “marine-grade concrete,” which is “reinforced with recycled plastic fibres.”

The hope is that this seawall — designed in collaboration with the Sydney Institute of Marine Science and Reef Design Lab — will work differently to traditional linear seawalls, which actually do more to harm ecosystems than encourage them.

The irregular tiles should attract water-filtering creatures, like mollusks and oysters, says Dezeen. Scientists will monitor Volvo’s seawall for 20 years to assess its impact on Sydney harbor’s biodiversity and water quality.

“The Living Seawall adds complexity to the existing seawall structure and provides a habitat for marine life,” Volvo said in a statement. “This adds biodiversity and attracts filter-feeding organisms that actually absorb and filter out pollutants — such as particular matter and heavy metals — keeping the water clean. The more organisms we have, the cleaner the water.” 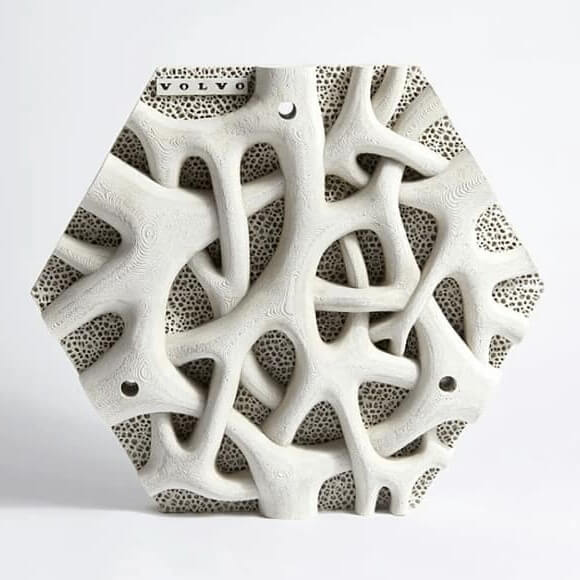 Why Did Volvo Build a Sea Wall?

Volvo is most commonly associated with sedans and sturdy station wagons, not encouraging biodiversity. However, according to the company, it had to become involved with the Living Seawall project after discovering the amount of rubbish that enters the ocean every day.

Plastic pollution is a huge threat to marine life, with reportedly one truckload of the material entering the seas every single minute. Greenpeace has even described the oceans as “plastic soup.”

The international environmental organization notes, “big pieces of plastic are choking and entangling turtles and seabirds and tiny pieces are clogging the stomachs of creatures who mistake it for food, from tiny zooplankton to whales. Plastic is now entering every level of the ocean food chain.”

It’s this ongoing threat to our oceans that inspired Volvo — which has pledged to ditch single-use plastic by the end of this year — to build the new Living Seawall.

“Rich and vibrant habitats have been replaced with seawalls and degraded by plastic pollution,” said Volvo. “It also presents a unique opportunity to research which specific seawall designs and geometries best support the ecosystems in our oceans.”