Leading automobile manufacturer Volkswagen is launching an electric camper van and it could have a vegan interior.

Volkswagen’s I.D. BUZZ is a modernized take on its classic hippy minivan. Volkswagen first unveiled the microbus in 2017 as a concept model but now the German automaker is working to bring the vehicle to market by 2022.

The four-wheel-drive I.D. BUZZ, described by Volkswagen as the “van of the next generation,” can be charged inductively or at a charging station. The van can charge up to 80 percent of its battery capacity in 30 minutes.

The microbus “echoes old-school magic” but is also “the world’s first versatile electric van with a fully automated driving mode,” according to the Volkswagen website. 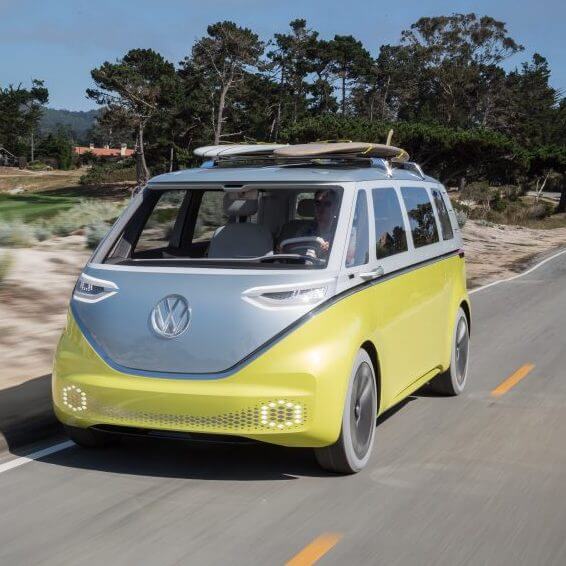 The upcoming I.D. BUZZ is a modern take on the vintage hippy van | image/Volkswagen

Given that zero-emission electric vehicles are better for the environment, manufacturers often bring this eco-friendly focus into the interior of the car by choosing to not use animal-based leather, a fabric known for its negative impact on the planet.

Volkswagen hasn’t revealed the specifics of its I.D. BUZZ interior, besides noting that it will have the “interior of the future.”

It’s possible the interior of Volkswagen’s new model will be vegan given that its electric SUV — the ID. ROOMZZ, which is set for a 2021 launch — has an all-vegan leather interior. The renewable raw material used is called AppleSkin and contains apple juice waste from cores and the skin of the fruit.

The vegan leather is a “highly sustainable hybrid material” which is made in Italy, AppleSkin creator Apple Nine Alliance wrote on its website. It makes for an “eco-friendly alternative for those who care about the environment and animals.”

Other car manufacturers are ditching animal products in their designs, too. Tesla’s Model Y and Model 3 electric cars will be fully vegan by next year.

Tesla introduced a synthetic leather option in 2015 and completely removed leather seating the following year. However, the steering wheel was still covered in animal-based leather, except for the upcoming Model Y and Model 3 cars, which will use a vegan alternative.